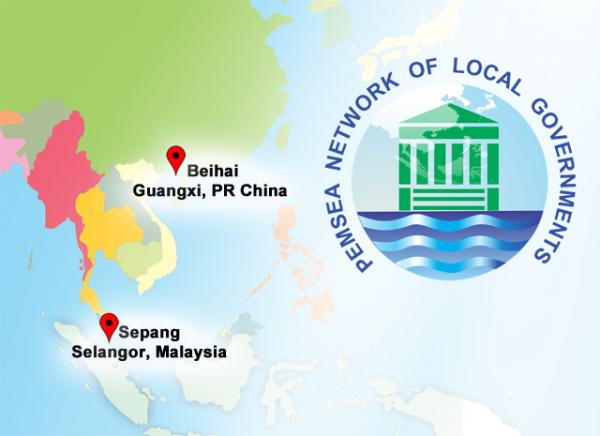 Xiamen, PR China — The PEMSEA Network of Local Governments for Sustainable Coastal Development (PNLG) Executive Committee approved the applications of the local governments of Sepang, Malaysia, and Beihai, PR China, as PNLG's newest members during the Fifth PNLG Executive Committee Meeting held last 10 May.
Sepang is located in the southern part of the State of Selangor in Malaysia, covering an area of 612 km², and a population of 212,050 (2010 Census). Coastal zones in Selangor are among the most productive areas in the state, offering a wide variety of valuable habitats and ecosystems services. These factors have made them popular settlement areas and tourist destinations, important business zones and transit points. Currently, more than 100,000 people live near Sepang coastlines. Sepang is known for hosting the Sepang International Circuit and as the site of the Kuala Lumpur International Airport. Sepang is also known for the township of Cyberjaya or the Silicon Valley of Malaysia, which currently, houses over 250 multinational companies. In view of the demands in the area, environmental challenges have been a major concern. Hence, various efforts have been and are being implemented by the state government to address in order to ensure the sustainability of coastal ecosystems. As a result, more than 10,000 mangrove seedlings have been successfully planted by the state government in collaboration with local communities. The Emission or Discharge of Pollutants (State of Selangor) Regulations 2012 also has been gazetted in order to control pollutants from 7 major activities such as earthwork (construction), pig farming area, inland aquaculture, marine aquaculture, sand mining and quarry activities.
Beihai is located at the southern end of Guangxi and the northeast bank of Beibu Gulf. Beihai is a coastal area with a distinctive geographical location and abundant resources, which proves advantageous to the economy of Beihai. It is the only coastal open city, as well as the sole city with deepwater seaports, all-weather airport, high-speed railways and expressway in West China. Beihai is blessed with diversified tourist resources and an ecological environment, making it a well-known destination for travel and vacation both locally and abroad.  Beihai has jurisdiction over 1 county and 3 districts, with a population of around 1.69 million and a land territory of 3,337 km². Beihai has formulated several regulations such as the 12th Five-Year Development Plan for Marine Economy of Beihai City and the Protection Plan for Marine Environment of Beihai City, and has revised the Function Zoning Plan for the Sea Area of Beihai City (2011-2020). Efforts have also been made in innovating a land and sea environmental administration system, and in building a more efficient land and sea integrated ecological protection system.
The two new members will be officially inducted at the PNLG Forum 2014 scheduled in September 8-11, in Sepang, Malaysia.
The meeting was concluded with a site visit to Xiamen University's Xiang'an Campus, which highlighted the university's researches related to the water quality monitoring of the Jiulong River Basin and the use of remote sensing in land-use and disaster prevention planning.
The 5th PNLG EC meeting was held in Xiamen, and led by the PNLG President Mr. Prak Sihara, PNLG Vice President Mr. Yang Tongzhu, and PNLG Secretary General Mr. Pan Shijian.