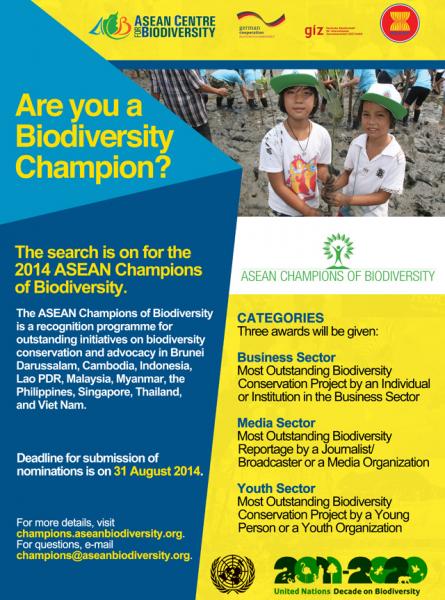 Los Baños, Philippines — The ASEAN Centre for Biodiversity (ACB) invites nominations for the ASEAN Champions of Biodiversity for youth, media practitioners and business institutions who have made significant contributions to the conservation and sustainable management of biodiversity in the Southeast Asian region.

Supported by the German International Cooperation (GIZ) through the ACB-GIZ Biodiversity and Climate Change Project (BCCP), the ASEAN Champions of Biodiversity recognizes outstanding projects on biodiversity conservation and advocacy in Brunei Darussalam, Cambodia, Indonesia, Lao PDR, Malaysia, Myanmar, Philippines, Singapore, Thailand and Vietnam. The award aims to generate greater leadership and public and media awareness on problems facing the region’s rich but highly threatened biodiversity.
The award has three categories, including Most Outstanding Biodiversity Conservation Project by an individual or corporation in the business sector, Most Outstanding Biodiversity Reportage by a media practitioner or media organization and Most Outstanding Biodiversity Conservation and/or Advocacy Project by a young person or youth organization.
According to Atty. Roberto V. Oliva, ACB Executive Director, "The ASEAN Champions of Biodiversity seeks to become a force multiplier by identifying and engaging leaders among the business, media and youth sectors who will spread awareness for the urgent need to conserve biodiversity."
Dr. Berthold Seibert, ACB-GIZ BCCP Project Manager, said, "Having more ambassadors that people can relate with will help the people of ASEAN to become aware of biodiversity and its connection to their daily lives."
Winners will receive token cash prizes and will be recognized in August. A publication of best practices will also be produced based on the stories of the finalists and winners.
The first staging of the ASEAN Champions of Biodiversity was jointly held in 2010–2011 by the ACB, GIZ, the ASEAN Foundation, European Union, Convention on Biological Diversity (CBD) Secretariat, United Nations Educational, Scientific and Cultural Organization (UNESCO) and the Asian Institute of Journalism and Communication.
The first winners — Green Community, Sahabat Alam, Architectural Students’ Association of the Philippines-University of the Philippines Diliman Chapter (ASAPHIL-UP), HSBC Brunei, PTT Public Company Ltd., Born to be Wild, Brunei Times and BusinessMirror — were designated as Ambassadors of Goodwill for Biodiversity in the ASEAN region. They continue to promote biodiversity conservation in the ASEAN region through various projects.
Interested individuals and groups may nominate themselves or other organizations until 31 August. The nomination form may be filled out at www.champions.aseanbiodiversity.org.