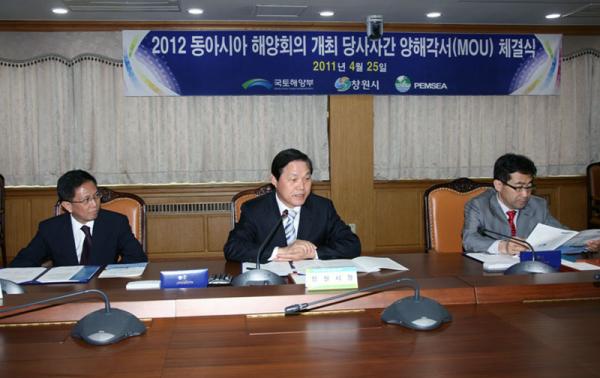 Changwon City, RO Korea — The Ministry of Land, Transport and Maritime Affairs (MLTM) of the Republic of Korea, Changwon City Government and PEMSEA signed a Memorandum of Understanding to formalize the hosting and organization of the East Asian Seas (EAS) Congress 2012 on 25 April 2011.

The MOU signing highlighted the commitment of the Republic of Korea through MLTM, represented by Mr. Park, Kwang-Youle, Director General for Marine Environment Policy Office and the Changwon City Government, represented by Dr. Park Wan-Soo, Mayor of Changwon City, to contribute to the achievement of the vision and objectives of the Sustainable Development Strategy for the Seas of East Asia (SDS-SEA).

The Government of RO Korea and the Changwon City Government will provide administrative and financial support for the hosting of the EAS Congress. A new facility is currently being constructed in Changwon City to serve as the venue for the Fourth Ministerial Forum to be held as part of the EAS Congress. Changwon City has also initiated the organization of its preparatory committees. The selection process for an events management group to handle the logistical arrangements for the Congress is ongoing.

The EAS Congress 2012 is tentatively scheduled for 9-13 July 2012 at the Changwon Exhibition Convention Center. The EAS Congress is seen as a key event coinciding with the Yeosu Expo 2012 in RO Korea, which is also focusing on oceans and coasts.