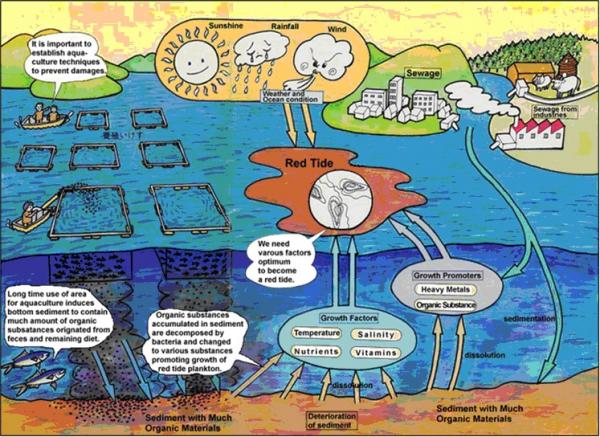 The appearance of “red tide” in Kep Province the last week of March 2016 was the first reported occurrence in the coastal area of Cambodia. After a second occurrence the following month, authorities issued a precautionary warning on the consumption of fishery products and bathing at beaches, pending a more thorough study. Fishers and hotel operators in Kep Province felt an immediate effect from the loss of fishing activity and visitors during the Khmer New Year. Several months later, hotel and restaurant owners say that visitors are still wary, and prices of fishery products, such as crabs, remain lower due to decreased demand compared to previous months.

“Red tide” is a common name for algal blooms exhibiting discoloration of seawater (often red or green) caused by the presence of a high number of phytoplankton[1]. A combination of factors can lead to the occurrence of red tide, including weather conditions, water circulation, wind direction, and most importantly, pollution from untreated sewage discharge from households and hotels and agricultural land run-off (see figure 1). “Nutrients” such as nitrates and phosphates are growth promoters of algae, and in higher levels, they cause red tide to occur. While red tide is a natural phenomenon, if coastal water becomes “eutrophic”[2], the frequency of red tide occurrence and the size of the affected area can increase. While there are several factors that may have caused the red tide in Kep, a major factor contributing is the eutrophic condition of the coastal waters.

To better understand the situation and take appropriate action, the Ministry of Environment of Cambodia requested Partnerships in Environmental Management for the Seas of East Asia (PEMSEA) to study the likely causes and the effects of the red tide on human health and the environment. As a participating country of PEMSEA, Cambodia is implementing Integrated Coastal Management (ICM), a comprehensive approach to effectively manage the coastal environment by taking an integrated approach – facilitating better collaboration across sectors and institutions and addressing local priorities in the process.

PEMSEA deployed Dr. Yasuwo Fukuyo of the University of Tokyo and member of the advisory board of the IOC Sub-Commission for the Western Pacific (WESTPAC) to provide support in conducting a rapid assessment of the situation. Samples taken in Kep found the red tide causing organism to be Noctiluca scintillans (photo 1), the most common red tide causing species around the world, including in the Gulf of Thailand. N. scintillans can reproduce at a very fast rate, and as it floats, it can be easily distributed in different areas through wind. This may have occurred in Kep as locals reported that the red tide spread rapidly, covering almost all coastal areas with the green algae (photo 1). 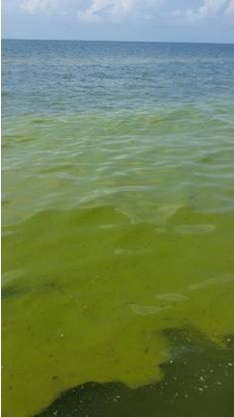 Countermeasures have been applied in other countries to address red tide, including spraying of clay or hydrogen peroxide and filtration using nets. But these are costly and, in many cases, unsustainable. As red tide is a natural phenomenon and almost impossible to prevent, the only way to reduce the frequency and size of an affected area is to ensure cleaner water and reduced eutrophication. PEMSEA suggested further monitoring of water quality, not only in Kep but in all coastal provinces, as well as tracking currents and wind direction, which may expose other provinces to  similar red tide occurrence. In 99% of cases, Noctiluca scintillians does not cause harm to marine organisms and humans. However, the ammonia emitted during a red tide can kill marine organisms, especially those that have low tolerance to ammonia, such as squids. It is unlikely that toxins coming from the red tide caused fish mortality. But as N. scintillans decays it consumes oxygen in the water and that can lead to hypoxic zones where fishes and other marine organism are unable to breathe. Fishes are often able to escape to open waters, but if an area affected by red tide is too wide, they may be unable to escape. This may be the case in Kep with its relatively sheltered area and poor water movement, where it is possible that fishes and other marine organisms were trapped near the shore and died as a result.

In Cambodia and elsewhere, government agencies and academic institutions can strengthen their capacity and devote additional resources to monitoring the quality of coastal waters, to mitigate and respond to red tide occurrence. This requires not only gathering of samples and analyzing of data, but also providing feedback to local and national officials and stakeholders so that necessary actions, such as setting up regulations or monitoring and enforcement, can be ensured.

During the next sample collection in May, it was found that the plankton along Kep coast no longer contained N. scintillans and plankton composition appeared normal for coastal waters in tropical areas.

For now, the coastal wasters and fishery products in Kep Province are safe, although red tide could recur in the future if conditions do not improve. Meanwhile, this incident illustrates how PEMSEA, as a partnership mechanism, was able to deliver solutions to a partner country through local technical support. Field analysis is an empowering process for all involved—for PEMSEA to conduct its research and for local stakeholders to learn the process and appreciate how scientific results can help in ensuring the right steps are taken for a successful outcome.

[1] Phytoplanktons are microscopic marine plants. In a balanced ecosystem, they are food for a wide range of sea creatures including fish, whales, shrimp, snails, and jellyfish.