Environmental Sensitivity Index Mapping in the Gulf of Thailand 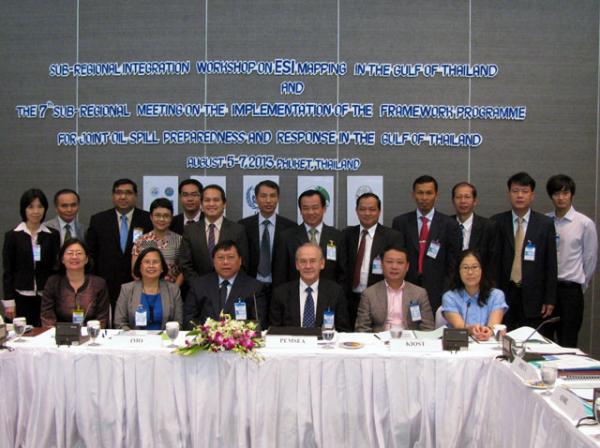 Phuket, Thailand — During a series of national workshops held in the Gulf of Thailand, the Environmental Sensitivity Index (ESI) mapping initiative was met with positive response and appreciation from relevant government and nongovernment agencies, including private oil companies.

National validation workshops were held in Cambodia, Thailand and Vietnam last 9-17 July to present the initial drafts of the in-country maps, which were developed by the respective national environmental sensitivity index (ESI) technical teams, as well as to gain consensus from stakeholders in the pubic and private sectors. Some of the concerns raised during the workshops included the accuracy of acquired data, access of stakeholders to the ESI maps, and the need to regularly update the data used for the mapping initiative.

A sub-regional integration workshop followed the national workshops, held at Cape Panwa Hotel in Phuket, Thailand, on 5-7 August. The sub-regional workshop was organized to review the respective in-country maps and to agree on the standards, format and requirements for developing the Gulf of Thailand ESI Atlas. Twenty-two country representatives and industry partners participated in the workshop. The workshop concluded that further refinements on the map symbols and map layouts were needed based on technical specifications and requirements as agreed upon during the workshop.

The Gulf of Thailand ESI Atlas will consist of geographically-referenced biological resources, human use and oil spill response resources, and ESI-classified shorelines that will be ranked based on their sensitivity to oiling.

Moreover, a project proposal and action plan on Hydrodynamic Modelling: Oil Spill Trajectory Model for the Gulf of Thailand was presented during the workshop. The project is aimed to enhance the functionality of ESI mapping by correlating spatial variables of the coastal and marine resources with the hydrodynamics of the Gulf of Thailand.

The workshop further concluded that the ESI Mapping initiative is useful and relevant to the Gulf of Thailand Cooperation, which aims to build the capacity of participating countries in oil spill preparedness and response and recognized the need to undertake similar efforts to develop management tools that will assist decisionmakers and spill planners to come up with prompt and effective response actions to oil spill incidents.

The ESI mapping initiative in the GOT is implemented by PEMSEA in collaboration with the International Maritime Organization (IMO), with financial support from the government of RO Korea through the Yeosu Foundation and the Korean International Cooperation Agency (KOICA). The project is being undertaken in support to the Framework Programme for Joint Oil Spill Preparedness and Response in the Gulf of Thailand, which was adopted by Cambodia, Thailand and Vietnam on 12 January 2006.