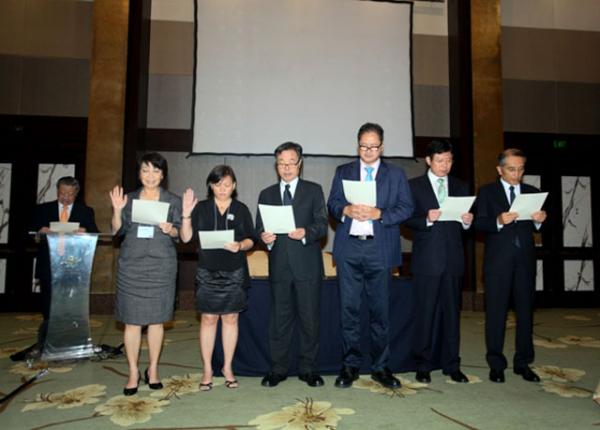 With the successful completion of their terms, Dr. Chua Thia-Eng, Dr. Li Haiqing and Mr. Hiroshi Terashima stepped down from their positions as chairs of the EAS Partnership Council to give way to their former co-chairs:

Council Chair Ambassador Mary Seet-Cheng, Senior Specialist Adviser in the Ministry of Foreign Affairs of Singapore and also a non-resident Ambassador of Singapore to Panama and Cuba

Intergovernmental Session Chair Atty. Analiza Teh, Undersecretary and Chief of Staff of the Department of Environment and Natural Resources (DENR) of the Philippines

Elected by the EAS Partnership Council to fill the vacated co-chair positions were:

Council Co-Chair Dr. Antonio La Viña, former DENR Undersecretary, National Focal Point for the Philippines and PEMSEA legal consultant. An expert in climate change and environmental law, he has served and continues to serve in various capacities in international negotiations on climate change and other environmental conventions. He is also a professor of law, government, environmental science, political science and philosophy, and the dean of the Ateneo School of Government in Ateneo de Manila University.

Intergovernmental Session Co-Chair Dr. Zhang Zhanhai, Director-General of the Department of International Cooperation, State Oceanic Administration (SOA) in PR China. A part-time oceanography professor, Dr. Zhang has been PR China's National Focal Point to PEMSEA since 2007 and has held positions in the Arctic and Antarctic research and administration organizations of PR China.

Technical Session Co-Chair Mr. Makoto Harunari, Managing Director of Japan Institution for Transport Policy Studies and former President of Japan Maritime Center. Mr. Harunari has served in the Japanese Ministry of Transport for 30 years, including as Director-General of the Maritime Bureau where he was extensively involved in developing national and international maritime policy.

The new Chairs and Co-Chairs were sworn to office by former Council Chair Dr. Chua Thia-Eng during the recent Partnership Council Meeting. Their three-year term began on 30 July 2013.
As a key component of the PEMSEA regional mechanism, the EAS Partnership Council formulates program and operational policy to support the implementation of the Sustainable Development Strategy for the Seas of East Asia (SDS-SEA). The Executive Committee, in particular, meets during the intersessional period of the Council to provide further guidance and direction to the PEMSEA Resource Facility in addressing the decisions of the Partnership Council. The election of the new Chairs and Co-Chairs of the Partnership Council ensures continuity and a broader scope of involvement in PEMSEA's leadership.