Climate Change Research Between KOEM and PEMSEA to Continue in 2012 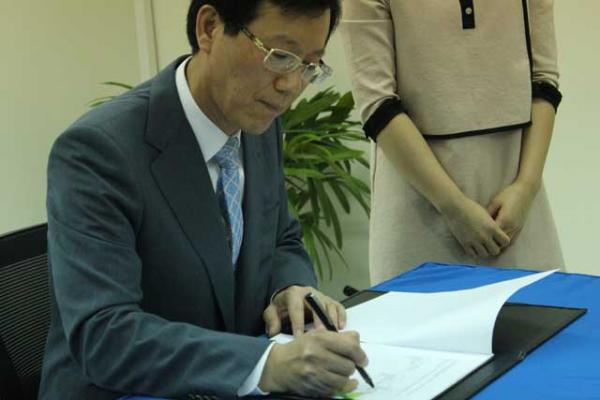 Quezon City, Philippines — A Letter of Agreement (LOA) regarding collaboration on climate change research in the EAS region between the Korea Environment Management Corporation (KOEM) and PEMSEA was signed on 30 January 2012 at the PEMSEA Resource Facility. Mr. Kim Hyun-Jong, Vice President of KOEM, and Prof. Raphael P.M. Lotilla, Executive Director of PEMSEA, signed the LOA. The 2012 LOA marks the second collaborative work between KOEM and PEMSEA since 2010, when KOEM provided support to PEMSEA for climate change adaptation research in EAS region. The LOA is focused on "Cooperation on Conducting Research on Monitoring and Analysis of Waters in the East Asian Seas Relating to Climate Change."

As the climate gets warmer, ocean acidification and temperature increase while dissolved oxygen (DO) decreases, all major issues for the international climate change science community. Analysis of these adverse effects of climate change requires monitoring data on temperature, pH, DO, salinity, and others. However, obtaining such data has been considered difficult since data are oftentimes scattered across institutes and countries, sometimes even non-existent.

Recognizing the lack of monitoring data relating to changes in waters of the East Asian Seas region, the LOA attempts to gather information on the status and analysis of monitoring of coastal and marine waters of the EAS region. The research aims to create a product that will provide useful information to EAS countries in developing their climate change adaptation strategies and policies in coastal and ocean.

The KOEM is a specialized organization for marine environment management of RO Korea. Its function is to support the government in effective implementation of marine pollution prevention and management policies, especially for oil spill preparedness and marine ecosystem protection and conservation, including climate change adaptation, as mandated by the Marine Environment Management Law of RO Korea (2007).