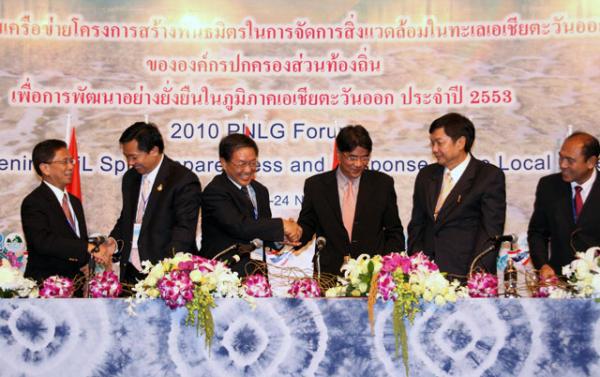 Starting from a demonstration area covering five municipalities in 2001, and through consistent awareness and capacity building and visits to other ICM sites, ICM implementation in Chonburi, Thailand has scaled up gradually to cover all 26 coastal local governments in 2009, and eventually the entire province, with a total of 99 local government members, in 2010.

Adopt the Chonburi Coastal Strategy as a common framework among governments and stakeholders to work collectively toward the shared vision of sustainable development of Chonburi;
Collaborate on the development of joint and/or complementary initiatives to support the implementation of a sustainable coastal management program guided by the Chonburi Coastal Strategy and its implementation plan;
Work in concert with other municipalities, and concerned agencies, institutions and sectors towards achieving the sustainable development goals of Chonburi Province;
Advance and support the replication of local ICM experiences, in collaboration with relevant national and local government agencies and government units, and to support the implementation of ICM policies and programs in Thailand;
Develop and implement ICM and related training workshops to develop local expertise/skills, technical support, and facilitate transfer of knowledge in the implementation of integrated coastal and marine programmes in Chonburi;
Share and exchange information and outputs on respective activities as well as experiences and lessons learned in integrated coastal and marine management planning and applications, including the development of information, data or web links to facilitate the sharing of information and outputs;
Provide advice to other local governments as may be requested for implementation of ICM programmes;
Support regional commitments which aim for sustainable management of coastal areas throughout the East Asian Seas region such as participation in the PEMSEA Network of Local Governments for Sustainable Coastal Development (PNLG) and implementation of the Sustainable Development Strategy for the Seas of East Asia (SDS-SEA) which was endorsed in December 2003 through the Putrajaya Declaration;
Support the local implementation of international commitments including:

The World Summit on Sustainable Development Declaration and Plan of Implementation;
The Agenda 21;
The UN Millennium Development Goals;
The Global Programme of Action for the Protection of the Marine Environment from Land-based Activities;
The Convention on Biological Diversity;
The United Nations Framework Convention on Climate Change (UNFCCC) (1994); and
Abide by the institutional arrangements for ICM implementation agreed among participating local governments and established through Chonburi Provincial Order Number 1834/2553 issued on 29 June 2010.

The signing of the Declaration was done as part of the 2010 PNLG Forum, which was hosted by Chonburi Province.

To commence the collaborative planning process, a study tour to Japan was organized for the Chonburi ICM Network members in February 2010 to learn about good practices in addressing various priority coastal management issues. A team led by Mr. Wichit Chatphaisit, Governor of Chonburi Province; and Mr. Vitaya Khunplome, Chief Executive of the Provincial Administrative Organization of Chonburi and ICM Program Director, visited Shima City and met with Mr. Hidekazu Oguchi, Mayor of Shima City; Ms. Masako Bannai Otsuka, Director of the International Ocean Institute – Japan and Researcher at the Ocean Policy Research Foundation, and local officials, to exchange experiences and good practices in ICM implementation. The Chonburi delegation learned about the Sato-umi concept of promoting healthy interaction of the coastal and marine environment and humans in order to enhance biodiversity and fisheries productivity, and how it is promoted through ICM implementation. They also learned about Shima City's experiences related to tidal flat and seagrass bed restoration, integrated river basin and coastal area management, and community participation in environmental monitoring. Another group that was led by Mr. Pornchai Qualskul, Vice Governor of Chonburi Province, and Mr. Chatchai Thimkrajang, Mayor of Sriracha Municipality, visited Tokyo and met with the Clean Association of Tokyo 23 to learn about waste management technologies. A third group led by Mr. Pakkaratorn Teainchai, Vice Governor of Chonburi Province, visited Kobe to learn about disaster management and contingency planning and Hokkaido Island to learn about sustainable tourism development. A workshop was held on February 25 for the groups to share experiences and identify recommendations for adoption in Chonburi.

To translate the recommendations into concrete plans, the 99 local government members of the Chonburi ICM network participated in a workshop on 8 March 2010 to initiate the development of ICM plans for consolidation into the updated Coastal Strategy Implementation Plan (CSIP) for Chonburi for 2011-2013, and integration into their respective municipal development plans and the provincial development plan. The CSIP review and planning process is undertaken annually in Chonburi as part of the planning for the next fiscal year. This ensures that ICM implementation is in-line with the national strategy for marine and coastal management and the provincial plan, and addresses key local issues. It also ensures the availability of funds to support the ICM program, and identifies areas needing support from various partners.

In view of the considerable scaling up of ICM implementation, Chonburi Province is now in the process of further assessing its ICM governance mechanism and how to make it more effective. A systematic capacity development program will also be prepared, and an ICM Learning Network will be established to support Chonburi's capacity building and training needs. In a workshop on the development of a five-year implementation plan for the SDS-SEA in Thailand, which was held on 29 March at the Department of Marine and Coastal Resources office in Bangkok, Chonburi Province was also recommended as a 'Learning Center' for the development and implementation of ICM in selected priority locations in Thailand.