A Decade of Local Government's Partnership towards Strengthening Coastal Governance 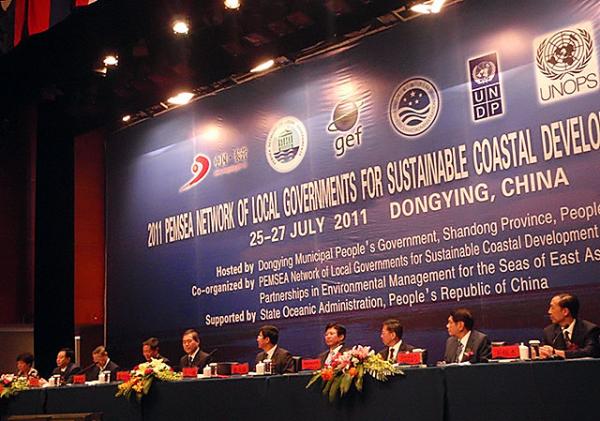 Dongying, PR China — The 2011 PEMSEA Network of Local Governments for Sustainable Coastal Development (PNLG) Forum marked the 10th year anniversary of the convening of the forum since 2001. For the past 10 years, the PNLG Forum has served as an effective venue for information exchange, for sharing good practices in ICM implementation, for discussing critical and emerging issues and mentoring among its local government members.

The 2011 Forum focused on the theme "Achieving Sustainable Blue Economy through Integrated Coastal Management." Hosting of the forum by the Municipal Government of Dongying, PR China, is significant because Dongying belongs to Shandong Province where the Development Plan of Shandong Peninsula Blue Economic Zone was officially approved by the State Council of China in early 2011. The plan is considered to be PR China's first marine and ocean economic development strategy and will be elevated as a national strategy.

The 2011 Forum witnessed the continuing expansion of the PNLG as three local governments, namely, Changwon (RO Korea) and Laoting and Lianyungang (PR China), signed the PNLG Charter, formalizing their commitment to uphold the vision and mission of the Network and to abide by the Code of Conduct of the PNLG. The network also welcomed its first associate members, the First Institute of Oceanography of the State Oceanic Administration (PR China) and the Coastal and Ocean Management Institute of Xiamen University (PR China). Currently, the PNLG has 29 regular members and 2 associate members from 8 countries across the East Asian Region. Observer local governments from Lao PDR and Timor-Leste have been regularly attending the forum in the past years.

In view of the continuing expansion and transformation of the PNLG into a strong regional network and to mark the 10th year anniversary of the forum, the members expressed their support and commitment by signing the Dongying Declaration on Building a Blue Economy through Integrated Coastal Management. The Declaration contains specific actions and targets in consideration of the 5-year PNLG Strategic Action Plan, which was adopted during the 2010 PNLG Forum in Chonburi, Thailand. By signing the Declaration, the members committed themselves to implement the agreed actions and report on their progress in the succeeding PNLG forums.

Plaques of recognition were awarded to the current PNLG President, Mr. Pan Shijian, Vice Mayor of Xiamen, PR China, and Vice President, Mr. Enrique Garcia, Jr, Governor of Bataan, Philippines, in appreciation of their efficient leadership and unfailing support to the PNLG over the past five years. Dr. Chua Thia-Eng, Chair of the East Asian Seas Partnership Council; Prof. Raphael P.M. Lotilla, Executive Director of PEMSEA Resource Facility; and Dr. Zhou Lumin, Head of the PNLG Secretariat signed the plaques of recognition on behalf of the PEMSEA Country and Non-Country Partners and PNLG members.

The 2011 Forum was capped with the traditional passing of the PNLG flag from the current host local government to the host of the 2012 PNLG Forum. Representing Changwon City, RO Korea, Mr. Ky-Bang Jung, Director General of the Economy, Maritime Affairs and Fisheries Bureau, received the PNLG flag from the Mayor of Dongying City, Ms. Lv Xueping. The PNLG members and guests were invited to participate in the 2012 PNLG Forum in Changwon City, RO Korea, which will be organized in conjunction with the East Asian Seas Congress 2012.