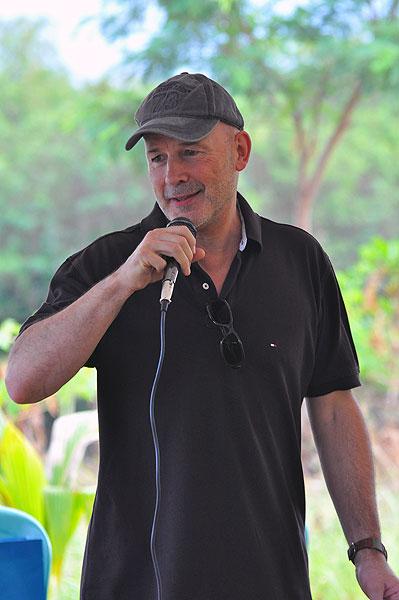 Parañaque City, Philippines — A coastal cleanup of the Las Piñas–Parañaque Critical Habitat and Ecotourism Area was conducted by the Direct Selling Association of the Philippines (DSAP), spearheaded by Avon Philippines and supported by the Department of Environment and Natural Resources (DENR) and PEMSEA.

The Parañaque Bird Sanctuary, as it is popularly called, has coastlines along Manila Bay, an identified pollution hotspot in the East Asia region. Migratory birds from neighboring Asian countries, including China and as far away as Siberia, visit the sanctuary during winter season.

The clean up event, held last 30 April 2011, started with welcoming remarks from Mr. Mike D. Gudgin, Avon Philippines' General Manager, a British national, who also serves as DSAP's Corporate Social Responsibility (CSR) Director. He welcomed the opportunity to implement an initiative to sustain the coastal environment, and thanked the DENR and PEMSEA for their partnership in the endeavor. Mr. Gudgin stated that he hoped that this activity would be the start of continuing initiatives by their group in sustaining the critical habitat. DENR's Regional Technical Director for the National Capital Region, Mr. Reynaldo Villafuerte, also welcomed the participants, and thanked them for their presence and support for the worthwhile endeavor. Prof. Raphael P.M. Lotilla, PEMSEA Executive Director, emphasized the importance of the Manila Bay region and how endeavors such as this are truly worthwhile and serve to create awareness of the need for sustainable development strategies for the coasts. Mr. Rey M. T. Aguinaldo, Project Manager, Las Piñas–Parañaque Critical Habitat and Ecotourism Area, briefed the group on salient points for a successful cleanup. A ceremonial treeplanting was also conducted, which was lead by Mr. Gudgin, Mr. Villafuerte and Prof. Lotilla.

As the group was directed to the coastline, it was gratifying to see people from various nationalities and ages band together for a common purpose. Avon Philippines and employees of other DSAP members Amway, Mary Kay, Direct Shopping Philippines, and Nu Skin, were able to collect as much as 150 sacks of waste from the coastline.

The event was the fruit of prior meetings with Ms. Ada Cruz-Lopez, Corporate Communications Manager of Avon Philippines and PEMSEA on possible projects for the sustainable development for coastal areas in the Philippines. The meetings resulted in the decision to enhance awareness of the need for sustainable development of coastal areas through a coastal cleanup activity, where employees and other members of the Direct Selling Association of the Philippines could participate.