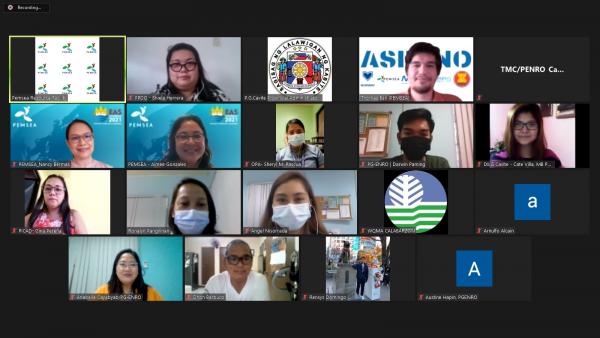 The ASEAN-Norway Cooperation Project on Local Capacity Building for Reducing Plastic Pollution in the ASEAN Region (ASEANO Project) virtually held its first Project Advisory Group (PAG) meeting on 19 March 2021 to discuss the composition, roles, and responsibilities of PAG members in the implementation of the project. The meeting was jointly organized by the Cavite Provincial Government- Environment and Natural Resources Office (PG-ENRO) and the PEMSEA Resource Facility (PRF), with both serving as Secretariat to the meeting. Representatives from the Philippines Department of Environment and Natural Resources (DENR) and Department of the Interior and Local Government (DILG), as well as officers from selected provincial government offices, were also in attendance.

Launched in December 2019, ASEANO is a collaborative three-year project between ASEAN and Norway seeking to build knowledge and capacity regarding plastic waste in the ASEAN region. The Government of Norway has taken a leading role in the international battle against marine litter and microplastics. Other partners include the Norwegian Institute for Water Research (NIVA) and the Center for Southeast Asian Studies (CSEAS) Indonesia. An inception workshop for the Philippine component of the project was held in March 2020, with PEMSEA designated as the implementing agency for the project’s Philippine component.

The province of Cavite, which lies just south of the megacity of Metro Manila, has been selected as the pilot site of the ASEANO project in the Philippines. Project partners and the local government selected the Imus river, a tributary of Manila Bay, especially where it flows through the city of Dasmariñas, as the main area of focus.

On February 8, 2021, Cavite PG-ENRO was designated as the head of the Project Advisory Group by virtue of Memorandum No. 3-S-2021 issued by the Office of the Provincial Governor of Cavite Province. Its responsibilities include: sharing of data and other information and providing technical assistance; assisting Cavite State University (CvSU) and De La Salle University Dasmariñas (DLSU-D) in the conduct of studies at the project site; recommending strategies and improvements for the project; and proposing possible local legal policies and ordinances based on the results of the studies.

PEMSEA will update the overall project work plan for 2021, incorporating details on the PAG meeting schedules, SMEs’ engagement and IEC awareness-raising activities. Quarterly meetings for the ASEANO Project Advisory Group will be conducted back-to-back with the PSWMB TWG meeting to facilitate advance planning and coordination within the project.