World’s fish by the numbers 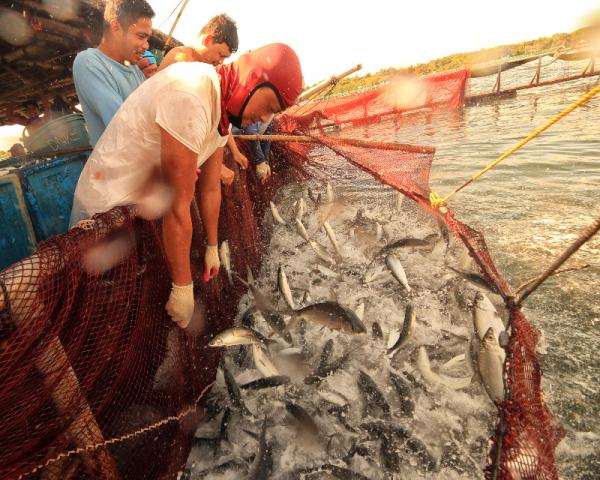 There are plenty of fish in the sea – but not for long, if we continue to fish unsustainably.

According to a report by the FAO1, a third of the world’s oceans are overfished. Stocks fished within biologically sustainable levels has decreased from 90 percent to 66.9 percent. With these numbers, some fish species may not have enough population left in the ocean to replenish and reproduce.

Over the years, the demand for seafood has drastically increased. 3.2 billion people rely on fish for almost 20 percent of their animal protein intake. Some communities, usually in developing countries, depend on fish as a key source of protein and healthy fat. Fish consumption in the world today has exceeded the consumption of meat from all terrestrial animals.

Sadly, not all of the fish caught or produced end up in anyone’s plate. The FAO revealed that around 35 percent of the fish and seafood harvested is lost or wasted. This waste could have feed millions more around the world. Seafood waste also wastes the energy used in transporting it from the ocean to the plate (or however far it gets), and most critically is a pointless risk to biodiversity.

Known for their rich oceans and seas, countries in the East Asian Seas region play a significant role in global fish production. China, Viet Nam, and Japan are among the world’s largest producers and exporters of fish and fish products. Furthermore, Asia is a huge food fish consumer, accounting for two-thirds of the 149 million tonnes consumed globally in 2015.

The world’s fisheries also employ 59.6 million people, 85 percent of which work in the fisheries and aquaculture sectors of Asia. Thus, looming threats to fisheries such as overfishing, climate change, marine habitat destruction, and marine plastic pollution could damage the livelihoods of millions of people.

For these reasons, the shift to sustainable fisheries is being promoted to ensure adequate fish and seafood for the future.

Ocean leaders and advocates are invited to join the discussion on sustainable fisheries at the East Asian Seas (EAS) Congress 2018 in Iloilo City, Philippines, 27-30 November 2018. Learn more about the fishing industry and how we can practice and support sustainable fisheries for the future of our shared seas with our speaker, Mr. Dale Galvin.

Dale Galvin is the Managing Director, Sustainable Markets and Impact Investing at Rare, as well as Managing Member of the Meloy Fund, an impact investment fund for sustainable coastal fisheries in Southeast Asia. In these roles, Dale oversees the deployment of new market-facing initiatives, strategic partnerships and innovative financial mechanisms with the private and public sectors, designed to catalyze the adoption of sustainable behaviors in our major focal areas of sustainable seafood, water and agriculture. Before taking on this new position, Dale spent over a decade as Rare’s Chief Operating Officer, where he oversaw all institutional conservation programs, as well as finance, operational functions, and helped grow the organization at more than 20% per annum.

Prior to Rare, Dale held a variety of management roles including Chief Financial Officer of PA Consulting Group North America, and the CEO of two startups, accumulating over 20 years of management experience. Dale holds a B.A. in Economics with distinction from Cornell University and an M.B.A. from the MIT Sloan School of Management.