Viet Nam Shifting to High Gears towards Scaling up ICM 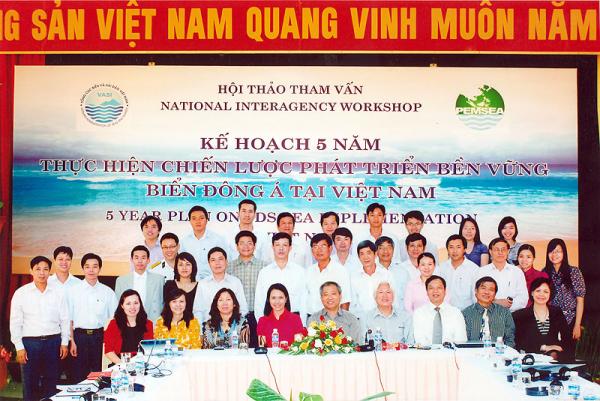 In particular, the country's commitment to implement the Sustainable Development Strategy for the Seas of East Asia (SDS-SEA) has provided the necessary platform to integrate existing and planned efforts related to sustainable development as well as planning for ICM scaling up. Seven coastal provinces and cities (i.e., Nam Dinh, Quang Ninh, Haiphong Va Ria-Vung Tau, Kien Giang, Soc Trang and Khan Hoa) have been identified as priority areas for ICM implementation for the period 2011-2015, along with the three existing ICM sites of PEMSEA (i.e., Danang, Quang Nam and Thua Thien Hue).

To help the seven provinces initiate their respective ICM programs, PEMSEA and the Vietnam Administration for Seas and Islands (VASI) of the Ministry of Natural Resources and Environment (MONRE) co-organized a National ICM Training on 26-28 April 2011 in Haiphong City. The training was also attended by participants from seven other coastal provinces that have been identified as priority areas for fisheries management under the Coastal Resources for Sustainable Development Project of the Ministry of Agriculture and Rural Development (MARD) and the World Bank. The training program was therefore developed with the intention of strengthening the participants' knowledge on how to prepare and initiate an ICM program while integrating aspects of fisheries management into the ICM program framework.

Following the training workshop, the seven provinces under MONRE program are expected to proceed with the development of their respective work programs for ICM implementation from 2011-2015.

Another major outcome of the training workshop was the partnership between the two national agencies, MONRE and MARD, to promote ICM as an instrument for sustainable development of marine and coastal areas. It is anticipated that similar partnership arrangements will be forged at the local level, particularly between the Department of Natural Resources and Environment and Department of Agriculture and Rural Development of two provinces (i.e., Khanh Hoa and Soc Trang) that are common to the programs of both Ministries.