Towards integrated and sustainable development in Sukabumi Regency, Indonesia: establishment of the Ciletuh-Palabuhanratu Geopark 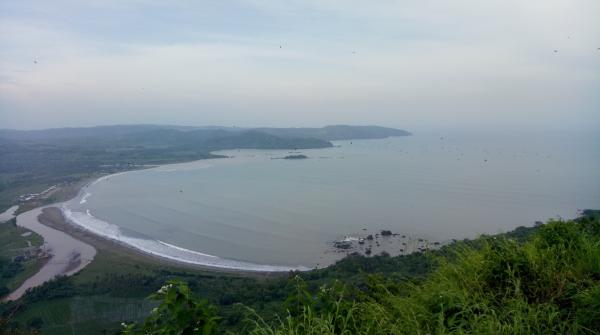 The Indian Ocean holds an important place in the culture of Java, with its fierce waves often attributed to the sea goddess Nyai Lara Kidul. Queen of the sea to the south of Java, Nyai Lara Kidul is the guardian of an area of the Sukabumi Regency in West Java named in her honor, Palabuhanratu (Queen’s harbor). In their own act of guardianship, the people of the Sukabumi Regency established the Ciletuh-Palabuhanratu Geopark, a conservation area managed on the principles of protection, education, and sustainable development.

The Ciletuh-Palabuhanratu Geopark was developed in 2015 out of a long-term integrated coastal management (ICM) program in the Regency that was established in 2003. From the beginning, it was inter-agency and multi-sectoral, and included stakeholder empowerment programs. Sukabumi Regency developed the program out of their own interest and have maintained commitment and funding since then. Additional funding has been obtained from national and provincial budgets as well as from partnerships with the private sector, NGOs, and academia.

The ICM coordination and management mechanism consists of a high-level ICM Program Coordination Committee (PCC) and a working level/technical ICM Program Management Office (PMO). Both have representatives from a variety of government agencies, economic sectors, and civil society. The Head of the ICM PMO is Mr. Abdul Kodir, Head of the Environment Agency of Sukabumi Regency.

This ICM program provided the foundations for the geopark, which was developed with the ICM concepts of spatial and institutional integration in mind. The geopark’s development was spearheaded by Mr. Dana Budiman, head of the Sukabumi Tourism Agency and now General Manager of the Geopark. Having attended ICM training with PEMSEA in 2002, Mr. Budiman was a key figure in the development of Sukabumi Regency’s ICM program. 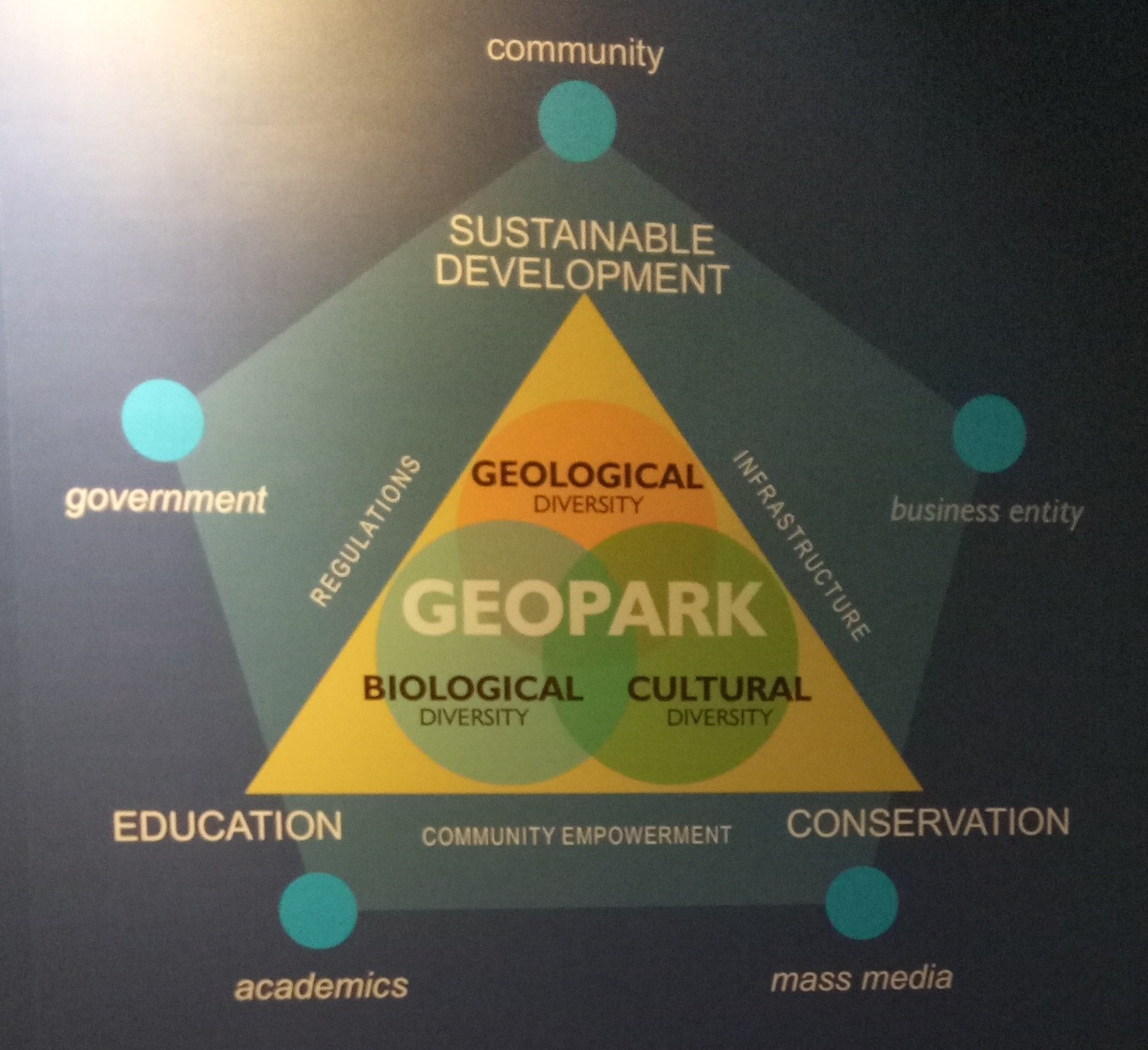 Management of the geopark considers multiple interlocking priorities and stakeholders

Developing the Ciletuh-Palabuhanratu Geopark was a priority at local, provincial, and national levels. Spread over 8 subdistricts, 7 of which are coastal, it covers 126,000 hectares or 30.3% of the Regency. Its 7 coastal subdistricts are within the 9 covered by the Regency’s ICM program. Its establishment is an example of integrated regional development that promotes nature conservation and sustainable tourism.

Covering landscapes ranging from mountains to the coast, the geopark includes a diverse range of important geological, biological, and cultural sites. Unique geological sites (geosites) include 65-100 million year old rock formations, the oldest on the surface of West Java. The geosites are spread over three areas: 26 are in the Ciletuh geoarea, 4 are in the Simpenan geoarea, and 7 are in the Cisolok geoarea.

Supported by decrees issued by the Governor of West Java Province and the Regent of Sukabumi Regency, a roadmap and a masterplan for developing the geopark were prepared with inputs from various local agencies and sectors along with support from provincial and national governments. The target was clear from the onset – to become a leading tourism destination in West Java, in the country, and globally.

The geopark is under the jurisdiction of the West Java Provincial Government, who established its infrastructure and improved road access. The provincial government is now planning the construction of a new airport nearby. Operational management is carried out by the Sukabumi Regency government. The geopark’s operational team and management board includes political representatives and members of the ICM PCC and PMO.

Within the geopark there are multiple habitat protection, restoration, and management initiatives. Coral reef transplantation has been used to restore denuded reefs. Beaches are rehabilitated through mangrove and coastal vegetation replanting. Sea turtle protection, in the ocean and on land, has been another key goal. These initiatives preserve the natural environment while boosting the ecotourism potential of the area. 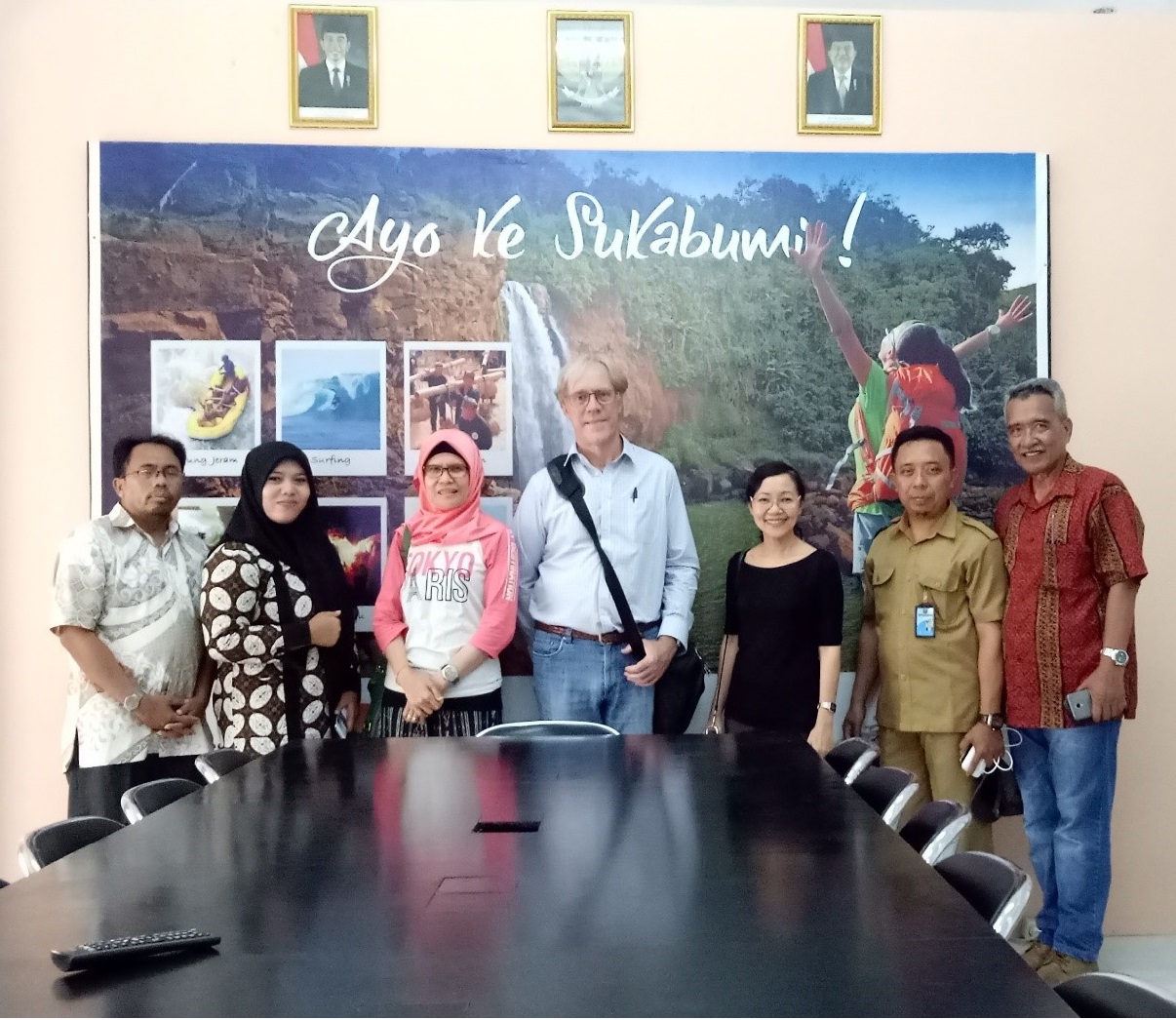 Civil society participation in ICM was ensured by the creation of Tim Pelestarian Dan Penantaan Pesisir Teluk Palabuhanratu (TP3TP), an NGO established to facilitate the participation of non-government sectors in the ICM program. TP3TP acts as the official representative of civil society in the ICM PCC, and supports ICM activities relating to ecotourism, community empowerment, public awareness, and capacity building. It partners with the Sukabumi Tourism Agency in managing the Ciletuh-Palabuhanratu Geopark Information Center, as part of the geopark’s operational team.

The geopark has a Conservation Museum dedicated to biodiversity protection. Based within this museum is the non-profit community organization Paguyuban Alam Pakidulan Sukabumi (Sukabumi Nature Society Circle, or PAPSI). PAPSI promotes the protection and preservation of nature in the geopark area, empowering the local community to participate in the geopark’s conservation initiatives.

In addition to these larger groups, many geosites are managed by a specific community organization. Community organizations managing their local sites receive technical, financial, and material support from the Regency government. One example is Citarik village in Palabuhanratu, which has a community-based waste management bank. Established in 2015, the bank reduces garbage while generating income by converting much of the waste into organic fertilizer and through the sale of recyclable materials. Its aim is to reduce waste by 50% in the next five years. The initiative also supports development related to agriculture and livestock, savings and loans, trading, and community empowerment. It aims to develop and promote the natural potential and resources of the village for ecotourism. The Regency aims to establish 100 similar waste banks in the next 3 years. 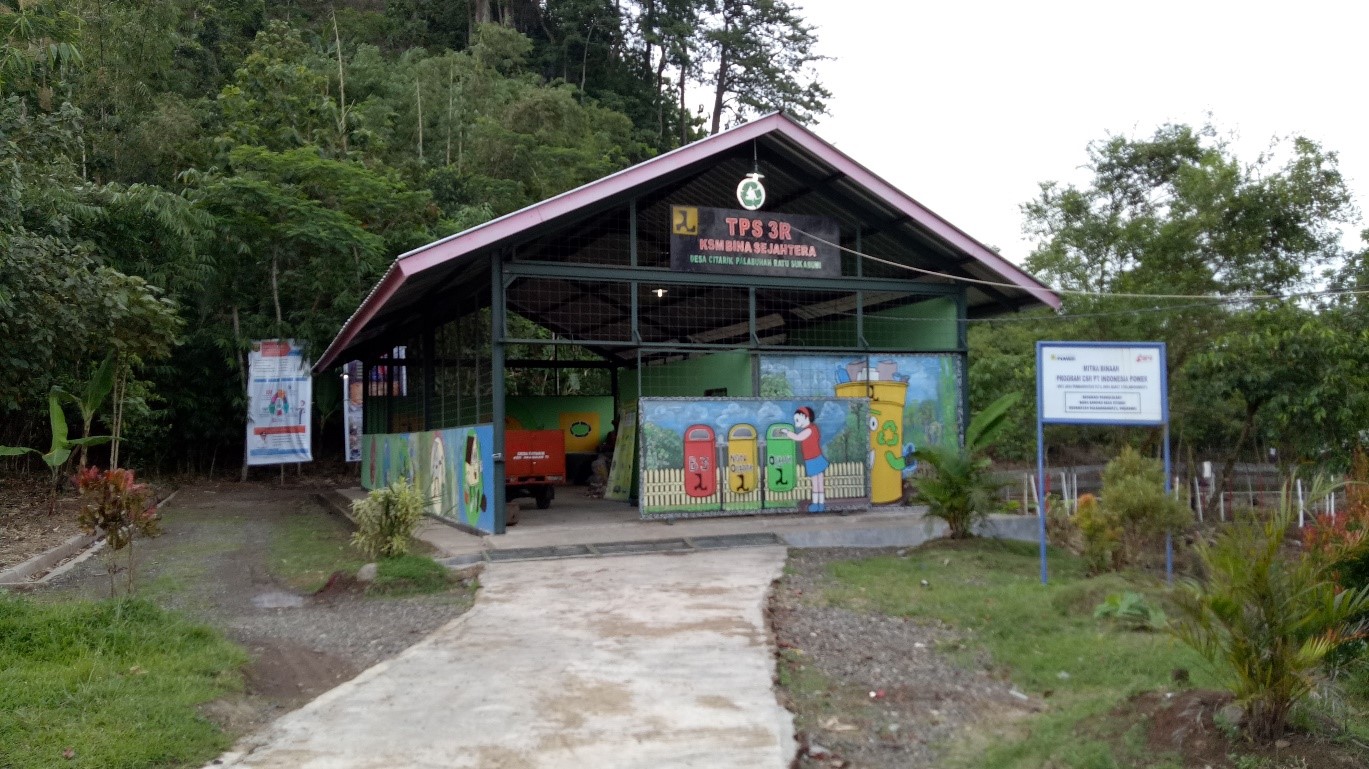 The waste bank in Citarik village

After it was designated as a National Geopark in 2015, the Ciletuh-Palabuhanratu Geopark became a UNESCO Global Geopark in April 2018. In assessing this decision, UNESCO took into consideration the stakeholder empowerment programs that the geopark had put in place. These programs have also attracted interest from companies in the area, who support the initiatives through their corporate social responsibility programs. The waste bank in Citarik Village receives support from PT Indonesia Power. Biofarma, state-owned vaccine company, supports model geotourism and conservation villages and works together with PAPSI. 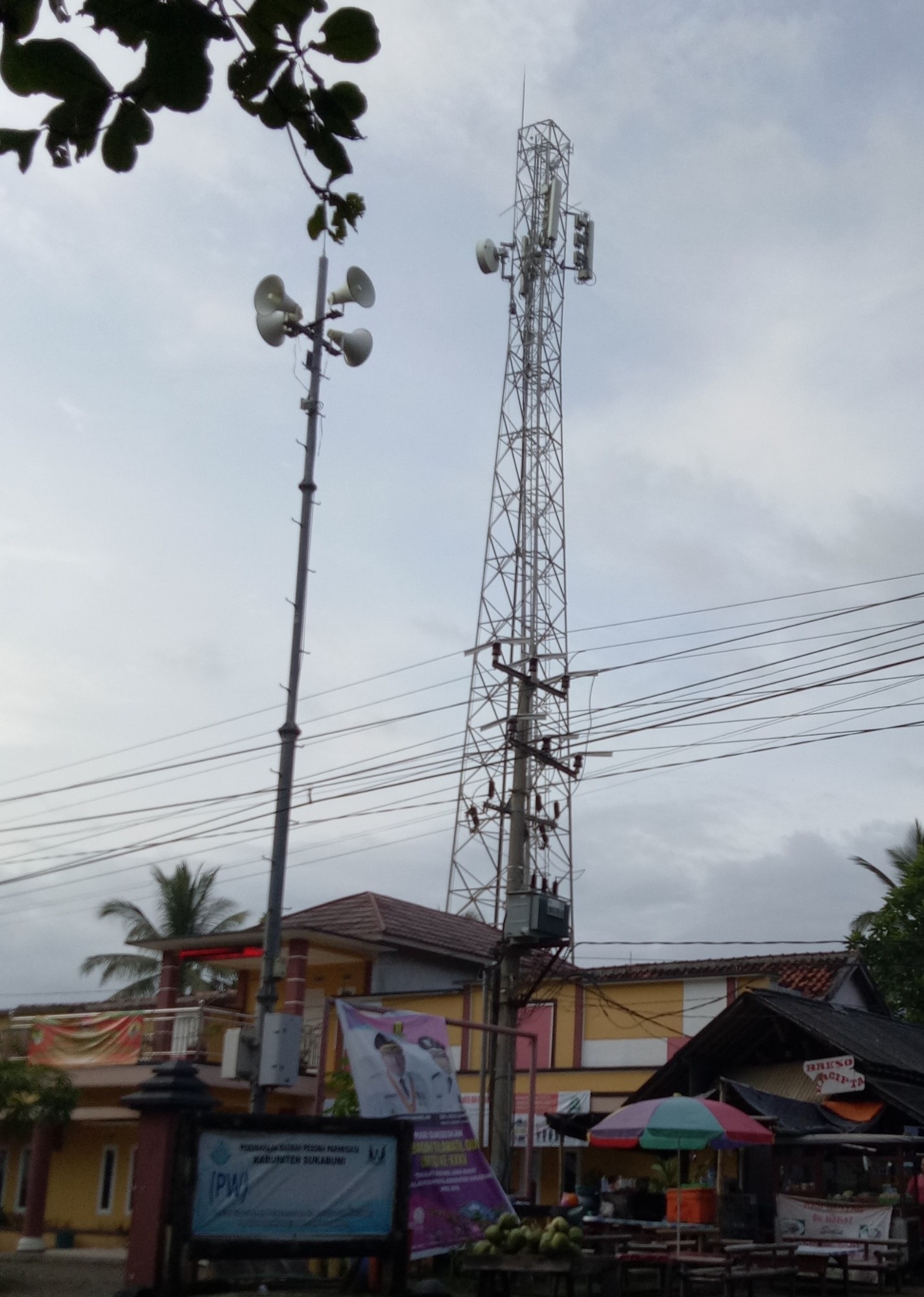 Tsunami early warning sirens have been installed throughout coastal communities

The geopark is linked with initiatives to reduce the vulnerability of the communities within and around the park. A particular focus is on climate change adaptation and disaster risk reduction. The Regency runs a Green City Development, Resilient Coastal Village, and Climate Village programs. Simulations of tsunami disaster preparedness have been conducted, and evacuation routes have been set up throughout the park. Citepus Beach in Palabuhanratu for example has a specifically designed setback area reinforced to prevent coastal erosion, and has had tsunami warning signs, early warning devices, and evacuation routes installed. The 9 coastal subdistricts within the ICM program have undergone hazard and vulnerability mapping to inform these initiatives.

A solid waste master plan and a water waste master plan were adopted in 2014, coupled with public awareness campaigns around solid waste management. There is an ongoing initiative to develop specific pollution reduction and waste management plans for the Cipalabuhan and Cipanyairan Rivers. These will complement existing river water quality monitoring program led by the Sukabumi Environment Agency. Other ongoing ICM programs relate to food security and livelihood development, with a strong focus on sustainable fisheries and seagrass cultivation.

PEMSEA, through the GEF/UNDP Project on Scaling Up the Implementation of the Sustainable Development Strategy for the Seas of East Asia (SDS-SEA), assists ICM in Sukabumi Regency in collaboration with the Ministry of Environment and Forestry and with technical support from the Center for Coastal and Marine Resources Studies of Bogor Agricultural University. PEMSEA activities include capacity building, aiding baseline and risk/vulnerability assessments in selected priority sites, and preparing its State of the Coasts report. Within the geopark, the SDS-SEA project involves plans to improve management of a sea turtle conservation area on Pangumbahan Beach, climate change adaptation and disaster risk reduction in Palabuhanratu Subdistrict, and pollution reduction and waste management in two rivers and coastal areas of Palabuhanratu Subdistrict.

Discussions are occurring over creating an integrated environmental monitoring program to consolidate current efforts carried out by various agencies. As part of this there is a desire to implement regular seawater quality monitoring and improve enforcement of laws against dumping waste into rivers. Capacity development remains a key area in need of improvement. Ms. Leni Lidyawati of the Marine and Fisheries Agency notes that ICM progress slowed recently when responsibility for coastal management was moved from the Regency level to the Province level, which delayed funds, training, and program implementation. Strengthening capacity through annual training courses and similar measures will help insulate the ICM program against future disruptions.

Since its establishment in 2003, the Sukabumi Regency’s ICM program has demonstrated great results through the support of the Regency’s officials. Some of those involved in the 2003 launch remain involved in running the geopark to this day. Mr. Kodir credits ICM with bringing together what were previously overlapping programs run by different stakeholders. He credits it specifically in changing sea turtle conservation away from a model in which turtle eggs were sometimes collected for sale. Mr. Budiman believes the ICM program has encouraged local communities and institutions to be aware and interested in the management of their environment, and that it has thus been important in ensuring activities in the area have not destroyed the coastal ecosystem. Mr. Trisda Filtra of the Environmental and Spatial Planning Section Secretariat of the Sukabumi Regency Government believes capacity building within local communities has been the key benefit of the program so far.

Because of this, there is strong belief that the ICM program needs to continue to be developed. Mr. Rasyad Muhara of the Environment Agency of Sukabumi Regency notes that integrated coastal management is a continuous and interactive process, which does not occur overnight, but instead requires consistent commitment by all stakeholders. Mr. Budiman emphasizes that the problems ICM deals with are too large to be tackled by any single body or initiative, and that progress so far can serve as pilot demonstrations with ample room to be scaled up and replicated.

The progress in Sukabumi Regency is a clear example of the benefits ICM thinking and implementation can bring. The Ciletuh-Palabuhanratu Geopark benefits and empowers its local communities while preserving some stunning natural beauty. If you visit the geopark, we highly recommend taking your time to explore the mountains, waterfalls, and beaches that the geopark has to offer! 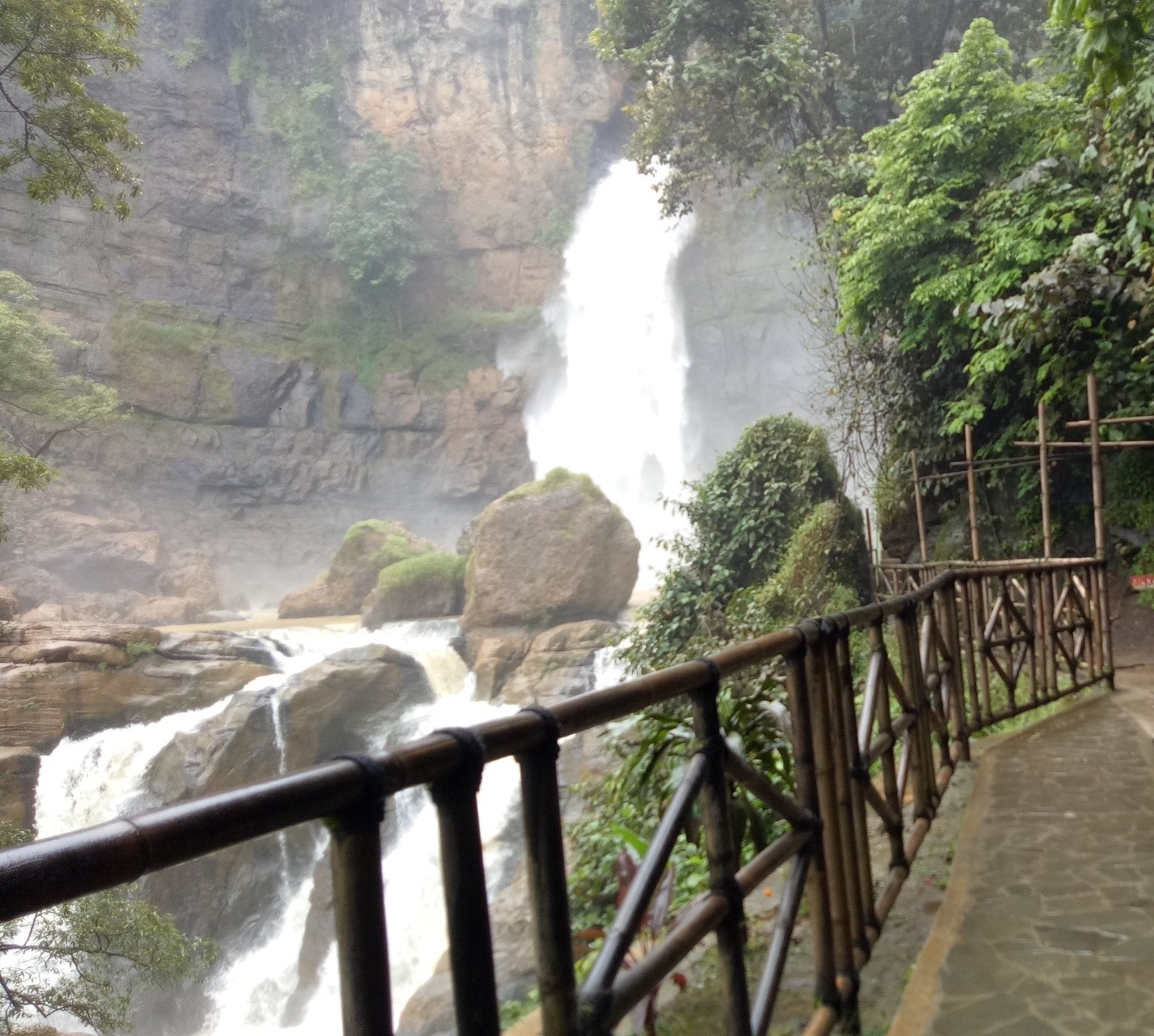