The State of My Internship in Manila 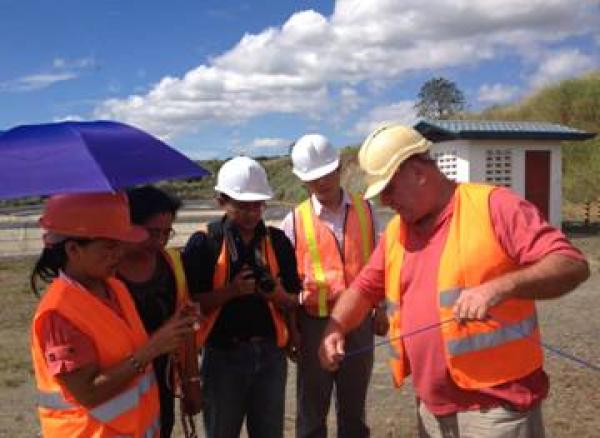 Quezon City, Philippines — As I spend my last days in the Philippines, it is interesting to recall my experiences and wonderful memories as an intern for PEMSEA. After four months working and living in Manila, I must say that my life in Manila was truly memorable and rewarding.

Through PEMSEA's tailored training program and guidance from PEMSEA staff, I learned more about the State of the Coasts (SOC) reporting system, the integrated information management system (IIMS) and other integrated coastal management (ICM) tools used for the sustainable development of coastal areas in the region. I spent a large part of my internship reviewing SOC reports prepared by PR China and the applicability of the quantitative data requirements of the SOC indicators. The results of the survey I conducted will be useful in improving the ongoing SOC reporting in ten ICM parallel sites in PR China. The survey on information management practices in the ten parallel sites will also be useful to help apply IIMS in the next phase of PEMSEA.

The SOC reporting system was introduced to the Xiamen demonstration site and ten parallel sites in 2010 in an ICM orientation workshop. Since then, five workshops have been organized by the State Oceanic Administration, the focal agency of PEMSEA and SDS-SEA implementation in PR China. During the preparation of SOC reports, PR China defined 27 core indicators and five supporting indicators system, adapted from PEMSEA's 35 core indicators and based on the needs of the local governments. Currently, the parallel sites are drafting and refining their SOC reports according to experts' recommendations from a workshop held in November 2012.

According to the newly published PR China's Framework Plan for the SDS-SEA Implementation (2012-2016), one of the 32 priority actions is to initiate the use of the ICM indicator system in selected coastal cities. The action specifically says that in applying the indicator system to a practical coastal zone, the indicator system should be properly adjusted and supplemented or divided further to make them more coastal zone-specific. After extensive discussion during training workshops with the parallel sites, the Chinese experts added seven new indicators, including: (a) population density and economic density; (b) ratio of domestic marine product to GDP; (c) environmental monitoring system; (d) total pollution load; (e) ratio of investment by private sector to GDP; (f) usable coastal resources; and (g) usable coastline.

Can the Chinese indicator system meet the needs of ICM implementation?

With this question in mind, PEMSEA's training unit designed a program tailored to my needs and interests consisting of a field visit, orientation of ICM and its tools, and most valuable of all, face-to-face discussion on ICM and its application in PR China, including the SOC reporting system.

In my review, I found that data for three PEMSEA SOC indicators are unavailable at the local or city level probably due to lack of a monitoring system in PR China. These include incidences/deaths due to waterborne diseases, malnutrition rate, and sanitation and domestic sewerage. The review also found that five PEMSEA indicators with data sources in PR China are not included in its SOC indicators, namely reclamation and conversion, water conservation and management, air quality, municipal solid waste and industrial, agricultural and hazardous wastes. During an SOC report review workshop, experts already suggested to include reclamation and water resources management in the SOC report by parallel sites. However, the remaining three indicators are still not covered. I hope my back-to-office report can remind the expert team to reconsider the indicator system of PR China.

In order to gather data on the information management situation and identify gaps and needs of ICM sites in PR China, I conducted a survey of the ten parallel sites. Luckily, all the sites responded and the results of the survey are highly encouraging. Based on the survey, eight of the ten sites have already established their database and most of the sites have the hardware facilities, staff and budget for the operations of an information management system and for training. These sites are also willing to apply IIMS in their sites. The apparent weakness of almost all sites is with data management, which could be a priority area for assistance in the next phase of PEMSEA (2014-2019).

Aside from SOC reports and IIMS, the ten parallel sites have also started to prepare their Coastal Strategy and Implementation Plans (CSIPs), a key component in PEMSEA's ICM Code. An ICM Code orientation workshop is now being planned, along with an initial status review of Dongying City, one of the parallel sites.

Enjoying the sights and sounds of the Philippines

The Philippines is a paradise for those who love charming coastal sceneries. One should never miss the chance to visit these sites. Aside from the famous beaches of Palawan and Boracay, you can also enjoy the beautiful sites of the Hundred Islands in Pangasinan, the Chocolate Hills in Bohol, and the city of Tagaytay overlooking the Taal Volcano. There are also a lot of famous churches and other historical and cultural heritage sites.

The Philippines is also known for its modern shopping malls. Travelling around the country on a limited budget is also very doable. Communiting by jeepneys, the Manila Metro Rail Transit (MRT) trains and long-distance buses is also very easy. If traveling during the non-holiday season, you can truly relax and get close with nature. It is, indeed, an ideal country to travel around.

Life in PEMSEA is truly rewarding. Not only can you learn from the region's experts on environmental protection, but you can also enjoy the Philippines' natural beauty and friendly people at the same time.

Taking this chance, I would like to express my sincere thanks to Mr. Stephen Adrian Ross, Mr. Guo Yinfeng, Ms. Daisy Padayao, Mr. Dwight Ronan and all PRF staff members for their help and guidance.

Lu Xingwang obtained his masteral degree in Marine Ecology from Dalian Ocean University in 2009. He was in service as Project Assistant of the Department of International Cooperation from the State Oceanic Administration, PR China for three years before his internship from December 2012 to April 2013. He is the 38th intern since the founding of PEMSEA in 1993.