State of the Coasts Reporting for Manila Bay 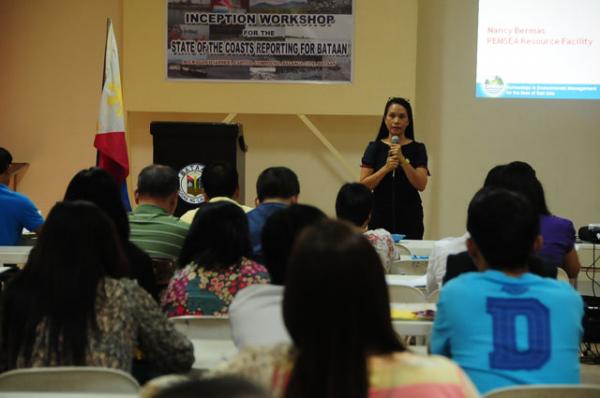 Manila, Philippines — "You can not manage what you can not measure," goes an old management adage. "Unless you measure something, you don't know if it is getting better or worse."

Three provinces along the Manila Bay coastline, namely, Bataan, Bulacan and Pampanga, joined hands to initiate the State of the Coasts (SOC) reporting system under the framework of the integrated coastal management (ICM) programs of the respective provinces.

The SOC reporting for Bataan, which started implementing its ICM program in 2000, will evaluate the progress and impacts of ICM implementation over the past 12 years. The SOC reporting for Bulacan and Pampanga, which started their ICM programs in 2011, will focus on establishing the baseline social, economic and environmental conditions and identifying priority issues that can be addressed in their respective ICM programs.

A joint planning meeting, held on 24 November 2012 involving the three provinces together with the Philippines Department of Environment and Natural Resources (DENR) and PEMSEA, clarified the process, requirements and roles and responsibilities, including an indicative timeline for the three provinces to complete their SOC reports. The critical role of the respective task teams in each province was emphasized, primarily to oversee the development and implementation of the SOC reporting system, and the participation of the different sectors and stakeholders in the reporting process.

Following the joint planning meeting, SOC Inception Workshops were held in Pampanga, Bulacan and Bataan on 29 November 2012, 3 December 2012 and 25 January 2013, respectively. The workshops were attended by representatives from the provincial and municipal local government units (LGUs), relevant provincial and national government agencies, the private sector, academe, nongovernmental organizations and people’s organizations. Outputs from the inception workshops included initial assessments of data availability, data sources, and action plans for the preparation of SOC reports in the three provinces.

One of the perceived challenges in the development of the SOC reports includes gathering historical data. Existing databases, including the Manila Bay Integrated Information Management System (MB-IIMS) and the Department of Interior and Local Government’s Local Government Performance Management System (DILG-LGPMS), will be employed for this purpose, along with other data sources identified during the workshops.

Bataan, Bulacan and Pampanga are committed to completing the data gathering, consolidation, validation and consultations by mid-2013 and to publish their individual SOC reports in the fourth quarter of 2013.

With financial support from the Global Environment Facility, Department of Environment and Natural Resources, and the Bataan Coastal Care Foundation for the case of Bataan, local governments and PEMSEA are working in partnership to expand the SOC reporting as part of the country's National ICM Program as well as to support the implementation of the Operational Plan for the Manila Bay Coastal Strategy.

PEMSEA developed the SOC as a monitoring, evaluation and reporting tool for local governments implementing ICM.