Scaling up of SDS-SEA and ICM implementation in Thailand 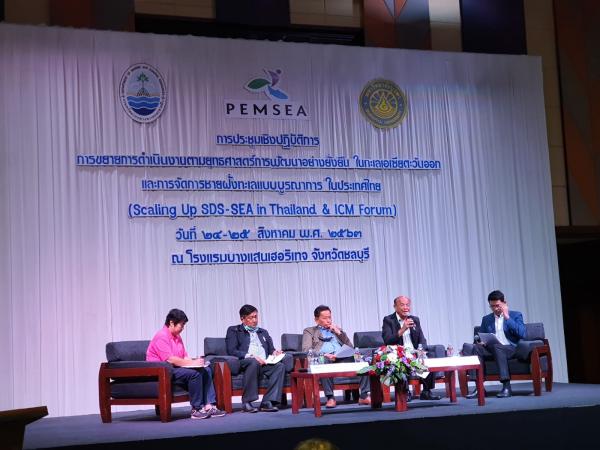 The National Forum on Scaling Up the Implementation of the Sustainable Development Strategy for the Seas of East Asia (SDS-SEA) and Integrated Coastal Management (ICM) in Thailand was conducted in Chonburi, Thailand, from 24-25 August 2020. The forum also served to conclude the GEF/UNDP/PEMSEA Project on Scaling Up the Implementation of the SDS-SEA in Thailand and discuss opportunities for sustainability and scaling up of project results and good practices.

Co-organized by the Department of Marine and Coastal Resources and the PEMSEA Resource Facility with the support of the PEMSEA ICM Learning Center in Burapha University, the forum had 168 participants. These included representatives from four coastal provinces, national government departments, ports, the private sector, community organizations, and academe. 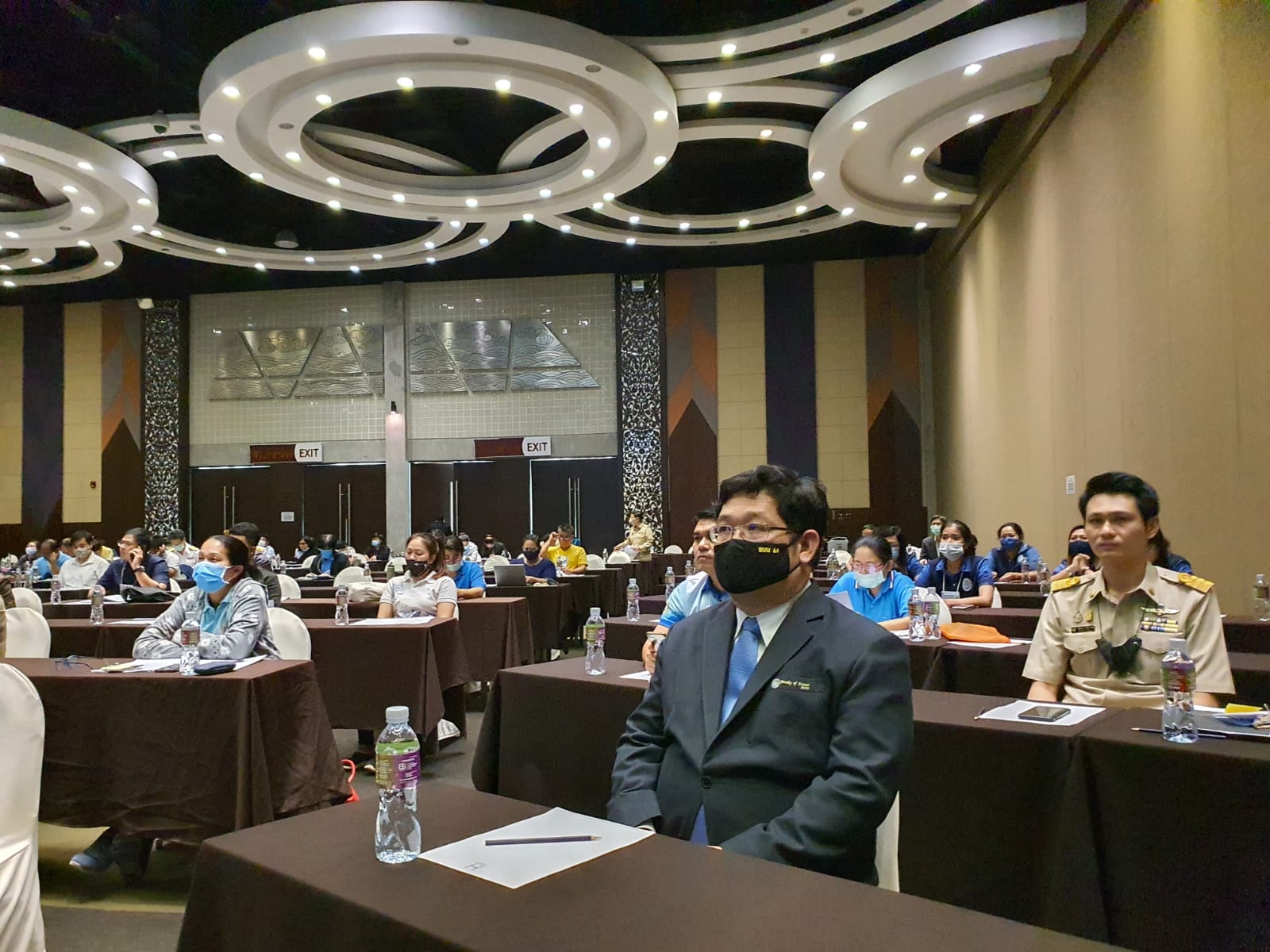 The forum discussed the National Act for Promotion of Marine and Coastal Resources Management 2015 (DMCR Act) as a platform for integrated coastal and ocean governance and ICM implementation. Under this Act, cross-sectoral committees at the provincial and national levels were established to facilitate community and local government participation in sustainable marine and coastal resources management. ICM coordination and management mechanisms for Chantaburi, Chonburi, Rayong, and Trat, including appropriate technical working groups, were established within the existing coordination and management mechanisms for implementing the DMCR Act in those provinces.

Chonburi has served as PEMSEA’s ICM demonstration site in Thailand since 2001. Learning from the experiences in Chonburi, ICM was horizontally scaled up and replicated in the other three provinces. Pilot sites in each province aimed to demonstrate applications of ICM in addressing key issues such as such as climate change adaptation (CCA) and disaster risk reduction (DRR), pollution reduction and waste management, habitat protection and rehabilitation, and sustainable fisheries management. Under the guidance of the Provincial Marine and Coastal Resources (MCR) Committees and coordination of the Provincial MCR Offices, the ICM Learning Center in Burapha University, with support from the ICM Learning Center in Prince of Songkla University, provided capacity building and technical support to the four provinces for developing their ICM programs. 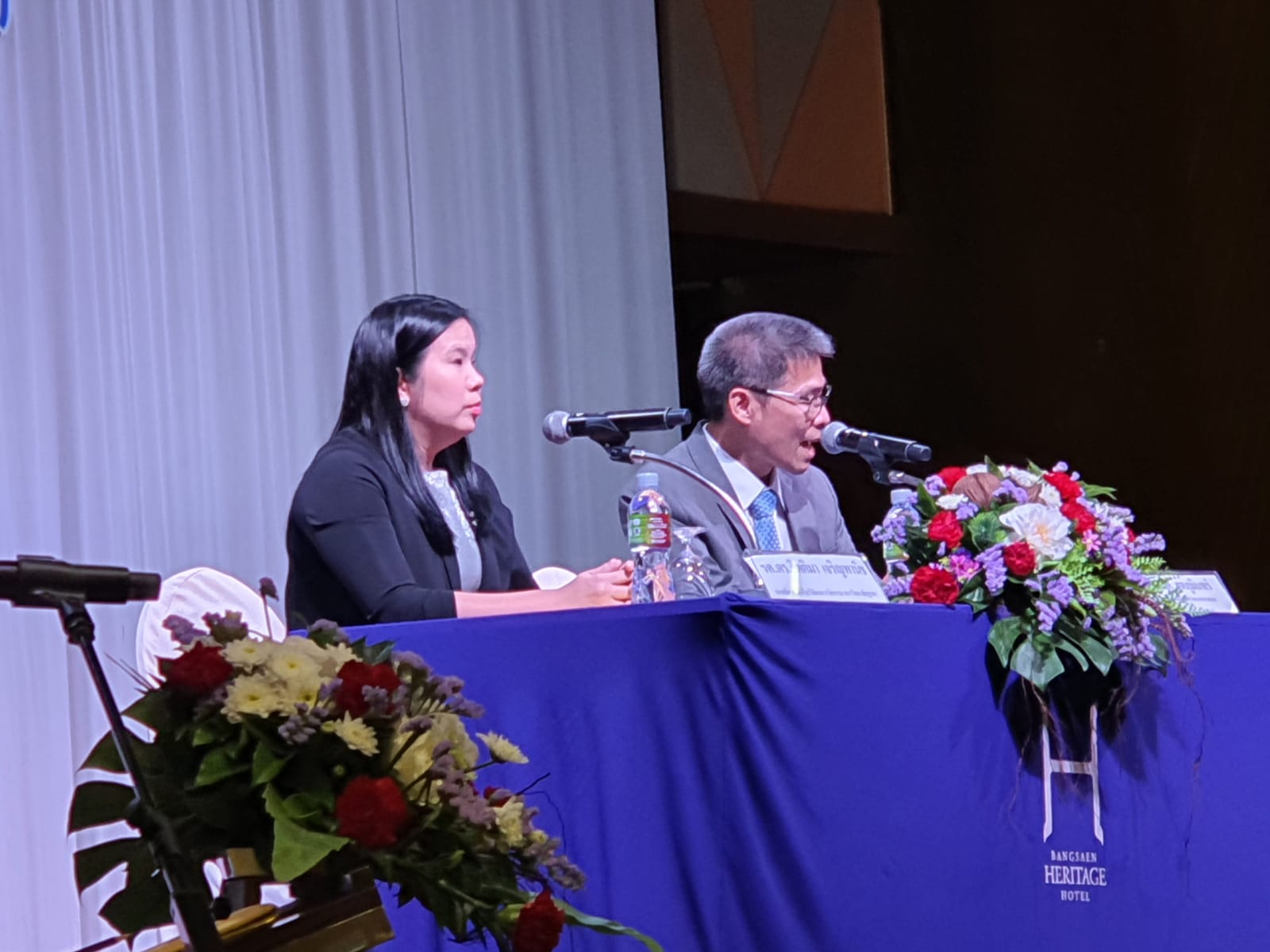 Baseline State of the Coasts (SOC) reports were also prepared for the four provinces to serve as a tool in monitoring and reporting the status of implementation of ICM governance and management programs.

The ICM plans will be submitted to the Provincial Marine and Coastal Resources Committees of each province for review and endorsement to the respective provincial and local administrations and relevant agencies and partners for incorporation in their work programs and budgets. 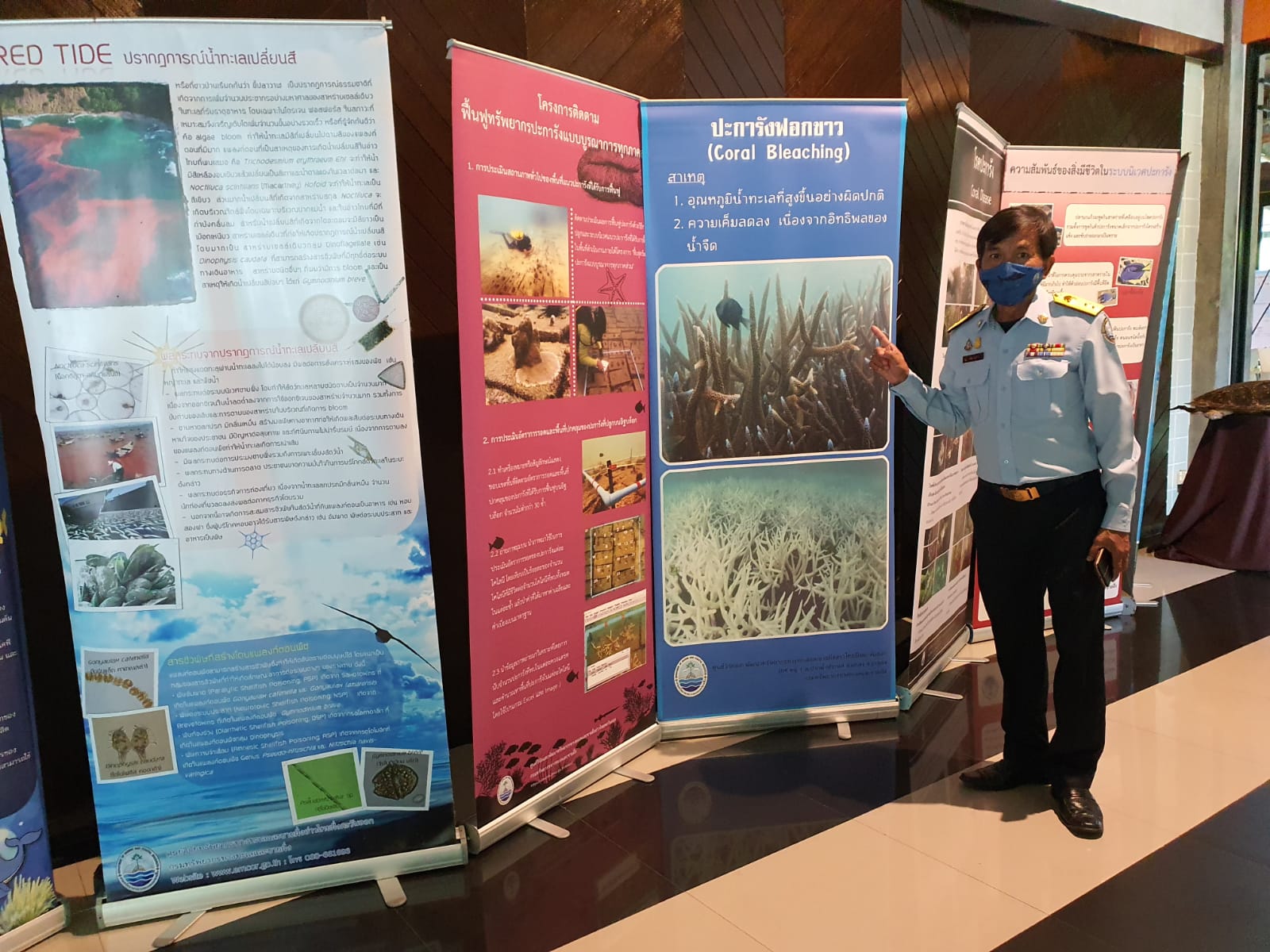 Integrated approaches in improving port safety, health and environmental management (PSHEM) and oil spill preparedness and response (OSPR) in Thailand were also presented, including the establishment and implementation of PSHEM System in Laem Chabang Port and the Partnership in Joint OSPR in the Gulf of Thailand between Cambodia, Thailand, and Viet Nam, which the series of SDS-SEA Projects facilitated. 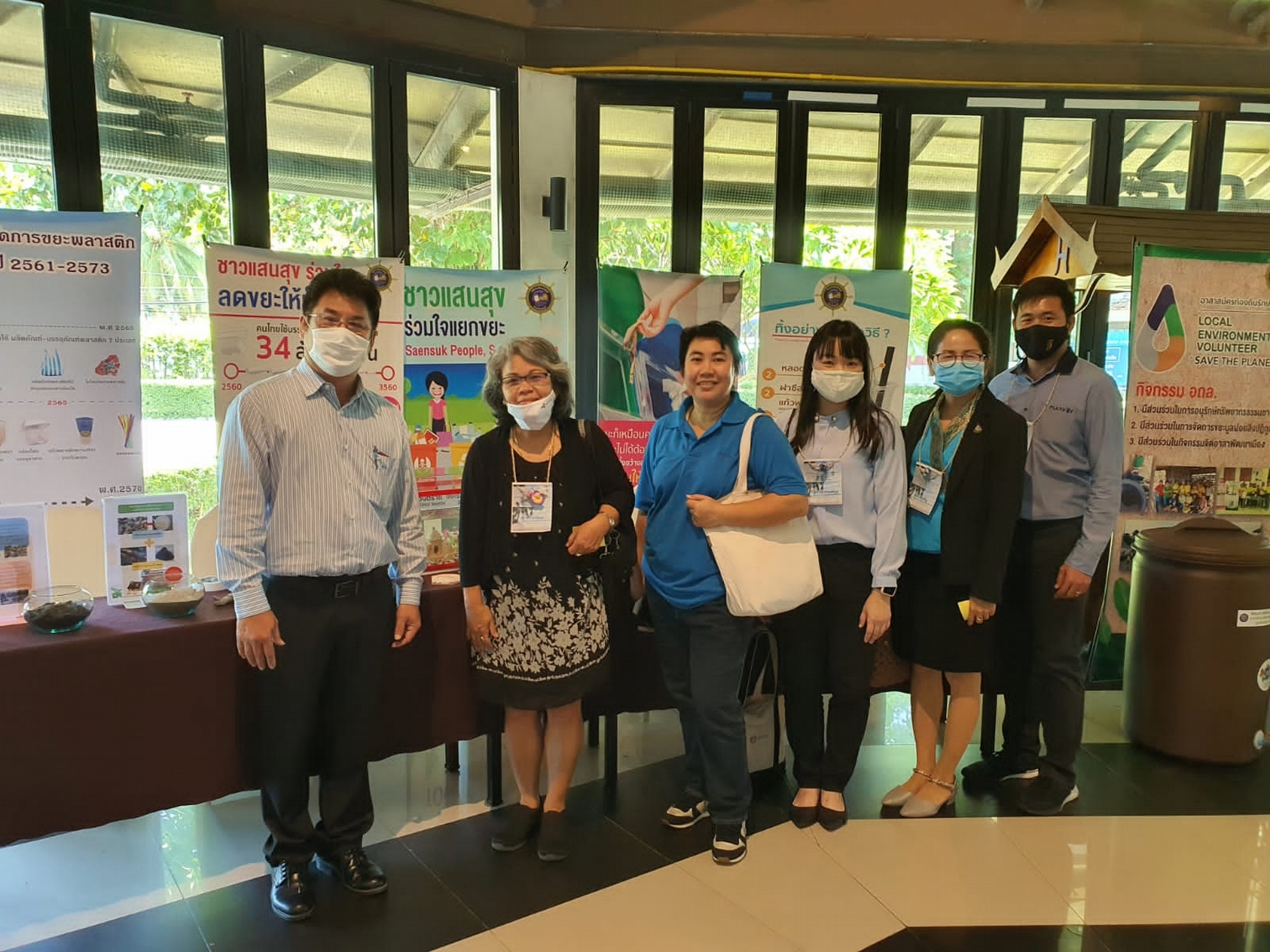 A National State of Oceans and Coasts (NSOC) report was also completed in 2018. It examined both ocean health and the blue economy. These are interrelated topics, which are most clearly seen in the value of ecosystems. For example, mangrove cover in the area is estimated to be worth over $6 million. While mangrove cover declined in the 20th century, in recent years it has begun to recover due to protection and replanting efforts. The blue economy in Thailand consists of four primary areas: community economy, fisheries and food safety, the maritime economy, and alternative energy. Innovation in policy areas, institutional support, and gap assessment will continue to drive the development of the blue economy into the future. Identified challenges include improving the effectiveness of marine protected areas (MPAs) and relevant ocean laws, the integration of various stakeholders into joint efforts, monitoring coastal and marine resources, collaboration with local communities, and sustainability.

A five-year national SDS-SEA implementation plan (2021-2025) that consolidates the country’s programs in support of the SDS-SEA was also presented. The plan proposed to continue and strengthen ICM implementation in the four provinces, and to scale up ICM to other provinces in the upper Gulf of Thailand (Chachoengsao, Samut Prakan, Bangkok, Samut Sakhon, and Samut Sonkram), which face similar issues and share coastal resources and associated benefits with the current ICM sites. The forum agreed that the DMCR Act and the arrangements for its implementation will be a primary mechanism to support the scaling up of ICM. 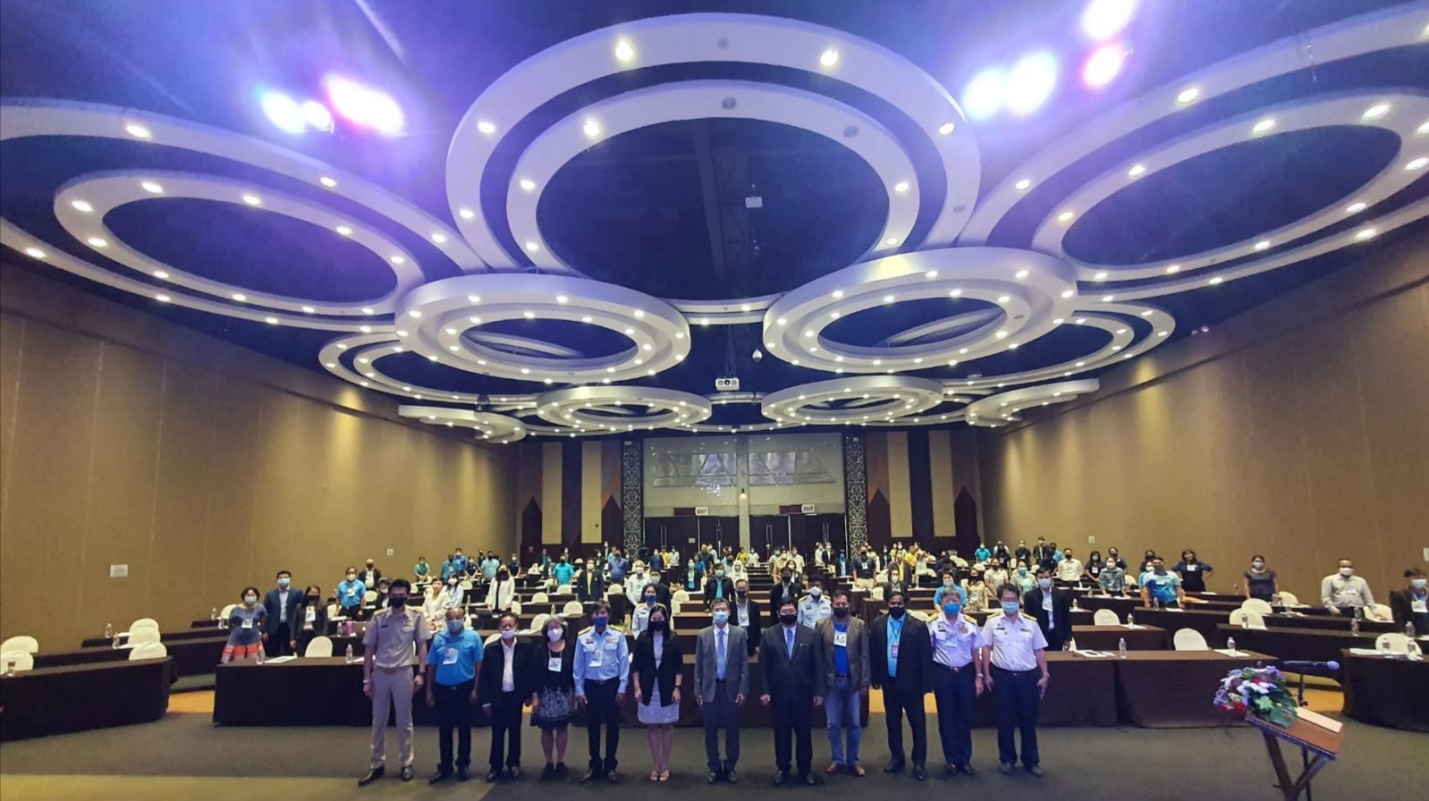