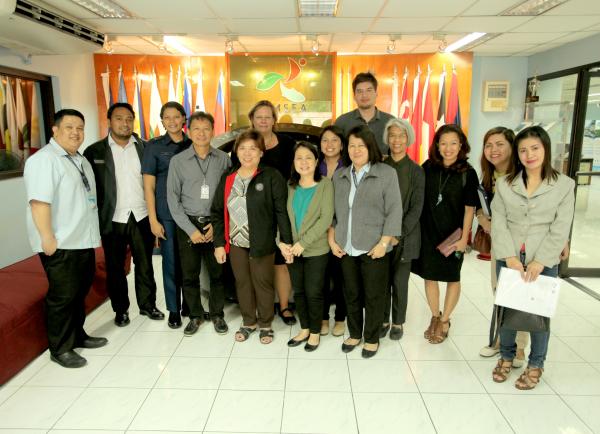 The Philippine Department of Transportation (DOTR) invited a focus group discussion to gather comments for improving the proposal “Blue solutions for reducing maritime transport GHG emissions through increased energy efficiency of ship, port and truck activities” and to prioritize maritime GHG mitigation activities for funding. The meeting was hosted by PEMSEA with support of the Environmental Management Bureau (EMB) on 11 July 2018 and was attended by representatives of a number of Philippine and international departments and organizations.

Proceedings were opened by Mr. Ferre, who welcomed the participants. He emphasized the importance to prioritize maritime GHG mitigation activities in the Philippines and to harmonize them with the DOTR long-term strategy. Mrs. Bresemann provided a brief history of the inception of the presented concept note, developed together with the marine agencies and the support of DOTR for funding under the Green Climate Fund (GCF). PEMSEA is nominated by the Philippines National Designated Authority (NDA) to be a GCF-accredited entity, and so could provide one route through which funding could move from GCF to the projects on the ground. This GCF concept note is focused on mitigating greenhouse gas emissions from ships, ports and trucks and is already in discussion with the GCF readiness team and the NDA.

Mrs. Bresemann then expanded on the concepts for this project, and why it needed the cooperation of such a wide range of stakeholders. This project looks at “maritime transport” holistically, including the movement of goods to and from ports on land as well as transport between ports. Estimates suggest nearly 90% of the world’s good travel through ports, and that shipping is expected to expand in the future. Dealing with greenhouse gas emissions from maritime transport will thus be critical to meeting the goal of the Paris Agreement to hold “the increase in the global average temperature to well below 2 °C”, Mr. Abad added.

The participants in this meeting were involved in sectors spanning the entire maritime transport chain, from international sea-lanes to ports to vehicles. Noting that the project was not only a common task but also protected the common good of a healthy environment affecting all those involved and others, Mrs. Bresemann emphasized the importance of enforcement saying “we want to enforce and take care that the people are protected”.

On the actions taken, Mrs. Bresemann advised bottom-up mitigation solutions, which have data behind them. The project would select best practice examples from countries around the world that could be applied in the Philippines. In addition, within the Philippines the project would begin with gap analysis, strategic action plan development, establishing baseline data, and scenario modelling. The primary focus after this preparatory work would be adjusting innovative technology and pilot implementation, while strengthening enforcement guidelines. Once this is achieved, the project can scale-up successful solutions and support capacity building.

A summary of the emissions situation in the Philippines was presented by Mr. Abad. Executive Order 174 institutionalized greenhouse gas management in Philippine government bodies. Estimates exist for data from 2010, although it has high levels of uncertainty due to a lack of data. The Philippines submitted an intended nationally defined contribution (INDC) regarding the Paris Agreement in 2015, which had the ambition of a 70% reduction in emissions by 2050 contingent upon foreign support. Preparation of a final NDC is ongoing, with the aim of depositing in this year. Current challenges include a lack of defined adaptation measures, a lack of capacity to access financing, a lack of an MRV (monitoring, reporting, verification) system, overlapping roles and functions among government agencies, and policy, regulatory, and institutional gaps. Mrs. Cruz added that carbon credits were on their way out to be replaced by nationally appropriate mitigation actions.

A summary of Philippine progress to meet with the targets of MARPOL Annex VI was given by Ms. Atienza. The Philippines has ratified the first five MARPOL annexes, and the Philippine Senate concurred on ratification for the sixth in 1997. The official submission to the IMO on the sixth annex took place in 2018.

MARINA is involved in a project with UNDP, IMO, and GEF to address the needs of MARPOL VI. The project stems from the marine energy efficiency project (MEEP) of the IMO, which was developed into the GloMEEP (global MEEP) project titled “Transforming the global maritime transport industry towards a low carbon future through improved energy efficiency”. GloMEEP focuses on 10 developing countries, of which the Philippines is one. The project has global, regional, and national components. Addressing this project is a Philippine taskforce involving MARINA, DOTC, PCG, PPA, CCC, DENR, the shipping industry, and maritime training institutes. Success so far include work on legal, policy, and institutional reforms, as well as capacity building. Current tasks include developing public-private partnerships and increasing MRV and knowledge sharing. 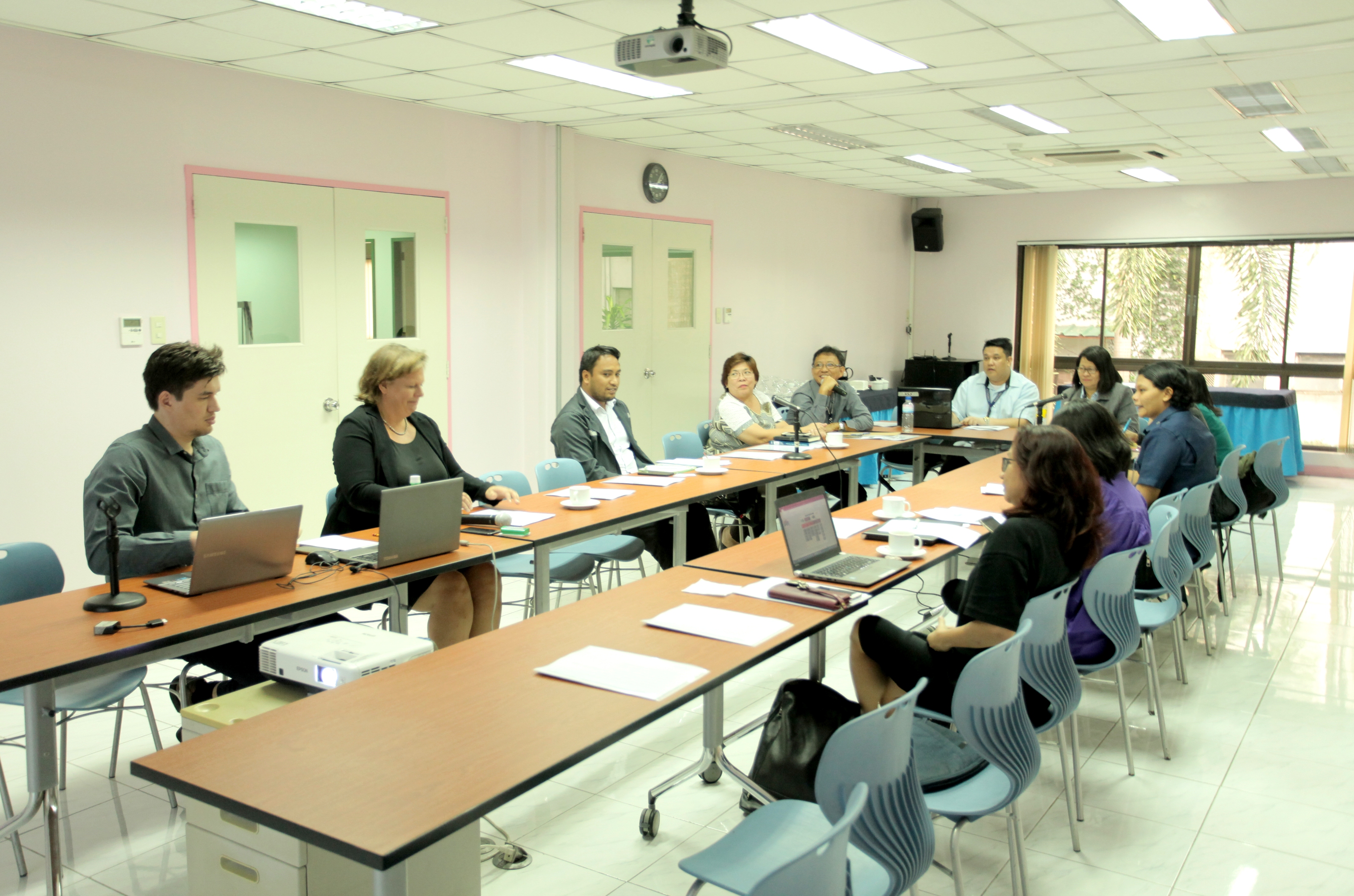 Ms. Moth read a statement and gave a presentation on behalf of Godofredo G Vailidad Jr., Deputy Chief of Staff for MEP, CG-9, Philippine Coast Guard, who was himself unable to attend. This presentation gave a brief summary of emission control options the PCG has identified as worth serious consideration in the Philippines. The PCG divides these emission control strategies into three categories: technological, operational, and market-based. The technological strategies focus on preparing for the long term and involve actions that would require upgrading and replacing ships. The operational strategies deal with ship-port interactions, important as harbor pollution has a disproportionate effect due to its proximity to population centers.

The market-based strategies involve various means of incentivizing a switch to less polluting ships and fuel. The PCG notes that fuel is the main cost of shipping, and so there is economic incentive to reduce this cost. However, some of the main methods for making fuel more efficient increase its polluting effect. In addition to tackling this with market-based strategies, the PCG notes the need for new equipment to conduct greenhouse gas inspections and capacity building training for personnel to use this equipment, so any fuel and/or greenhouse gas regulations can be enforced.

A presentation by the PPA highlighted a number of initiatives and sustainability measures the PPA was already taking, which could serve as replicable examples or be scaled up. The PPA has put into place a Port Environmental Policy (PEP), for which new implementing rules and regulations are currently being drafted. One success has been establishing an 8455kW shore-based power supply in the Cagayan de Oro that supplies small passenger vessels, which is set to be expanded to cover all ships. Lighting in some ports is being moved to solar-powered systems, and there are plans to implement port congestion charges for trucks. PPA also engages in partnerships, with other ports such as in a plan for a joint accreditation system with the Yokohama Port Authority, and with academia, such as in a “clean Air for Sustainable Future” project with De La Salle University. A priority for the PPA in the future is to develop its capacity, so it can expand these projects and engage in new ones.

Mrs. Ebro from GIZ presented the results of their freight logistics greenhouse gas emissions study which is ongoing with a number of ASEAN countries including the Philippines. Transport causes 23% of global CO2 emissions, and 4% of global emissions are from surface freight (road and rail). In Asia, while freight trucks make up a small number of total vehicles (<10%), they contribute over 50% of total CO2 emissions, as well as producing 1/3 of NOx emissions from transport and 50% of PM 2.5 emissions. The Philippines’ land freight network has large room for improvement, as it has in recent years slid down the rankings of the Logistics Performance Index to 71st globally and 7th in ASEAN.

Improving transport logistics is key policy goal in ASEAN. Greener freight would impact climate change, local air pollution, enterprise, and national economic competitiveness, while technological advancement is making green freight a tangible goal. GIZ noted the difficulty of studying freight, as in their September-December 2017 study they were only able to survey 5% of truck operators in the Philippines, although they did manage to carry out these surveys through 10 regions.

Key recommendations for reducing emissions from land freight in the Philippines include professionalizing the logistics industry, increasing truck efficiency, reducing empty miles, enhancing multimodal freight connectivity, and decongesting Manila. Challenges include different LGU rules, a problem raised by truck companies during the survey, and the lack of a holistic body to regulate freight transport.

Discussions throughout the day focused on the need to progress with further initiatives to reduce all emissions in the maritime transport system. Many solutions and challenges were common between different parts of the system. On regulatory gaps, Mr. Abad noted that current clean air guidelines in the Philippines do not cover shipping. Mrs. Uranza from the IMO noted that the Philippines often lacked mechanisms to enforce agreements it had signed up to. Ms. Bresemann noted in all cases that data was lacking, but that this could begin even before the project was fully approved. There was also discussion on involving Malaysia in this project, so that the countries could share knowledge and progress to create solutions that could be replicated throughout the world.