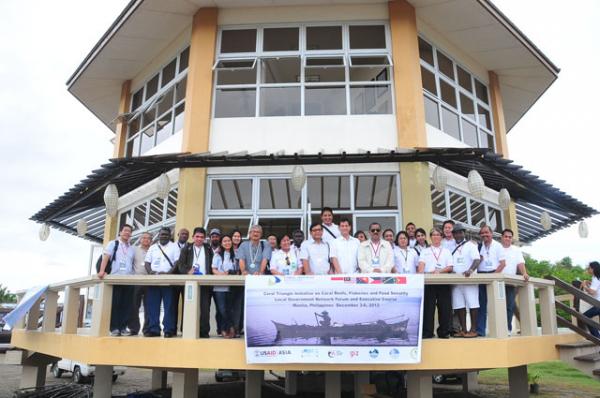 Bataan, Philippines — The number of local governments championing coastal and marine management is steadily increasingly over the past decade.

In the East Asian Region, the PEMSEA Network of Local Governments for Sustainable Coastal Development (PNLG) has been playing a critical role in promoting integrated coastal management (ICM) as a framework and systematic approach to achieve sustainable development within and across their administrative boundaries. The network, with its 31 members spanning 8 countries in East Asia, has consistently served as an effective platform for information sharing and exchange among its members, including other interested local governments and organizations, for the past 12 years.

On 4 December 2012, Bataan Province (Philippines), a PEMSEA ICM site and an active PNLG member, hosted the study tour of local government leaders from the countries comprising the Coral Triangle Initiative on Coral Reefs, Fisheries and Food Security Local Government Network (CTI-CFF LGN), which included Indonesia, Papua New Guinea, Philippines, Solomon Islands and Timor-Leste. The CTI-CFF LGN, which was launched in 2011, shares the advocacy of the PNLG–that is, to give greater voice to those at the frontlines of marine and coastal management and promote cooperation between local governments. The study tour, which was part of the four-day CTI-CFF LGN Forum, was designed to give the participants an understanding of the role of a local government in the implementation of an ICM program and the benefits of being part of the PNLG.

The study tour provided a glimpse of the initiatives of the City Government of Balanga and the Province of Bataan that contributed to improvements in the social and economic well being of the people as well as improvements in coastal governance. The discussions highlighted the key attributes of the Bataan ICM Program that are responsible for its success, which included: (a) strong political commitment and support; (b) presence of local champions that help promote the ICM advocacy; (c) enduring partnership with the private sector; and (d) putting in place effective measures for sustaining the ICM program. Bataan cited that the annual PNLG Forum has provided a good venue for sharing its best practices and challenges in ICM implementation and learning at the same time what works and what does not in other local governments' context. Bataan Province hosted the 2009 PNLG Forum.

The CTI-CFF LGN recognized the PNLG as a well-established network of local governments for sustainable coastal development and opportunities for networking were discussed, which included: (a) participation in the annual forum of the PNLG as observers to share knowledge and good practices; (b) joint implementation of projects at the local level in areas common to the PNLG and CTI-CFF LGN (e.g., Bali); (c) facilitating cross-learning through conduct of study tours; and (d) participation in ICM executive courses on a cost-recovery basis.

The Forum was concluded in Manila on 6 December 2012 with the signing of the Manila Declaration. In the Declaration, the local government leaders that are part of the CTI-CFF program committed to advocate for stronger and more direct engagement with national and regional counterparts and with each other to achieve the goals of the CTI-CFF. The Declaration further identified key areas that provide opportunities to advance the networking process between the PNLG and CTI-CFF LGN. For instance, it called on the local government leaders to undertake inter-local and multi-level dialogues and exchanges within and outside the country; National Coordinating Committees (NCC) were invited to foster inter-local cooperation in their respective countries and inviting local government leaders or local government associations to be part of the NCC; and the Interim CTI-CFF Regional Secretariat was requested to promote sisterhood and twinning arrangements among local governments.

The Philippines League of Municipalities has been identified as the home base for the CTI-CFF LGN for the next two years, while arrangements for institutionalization of the network are being identified.