Of Prawns and Mangroves: Green-mindedness in Orion, Bataan 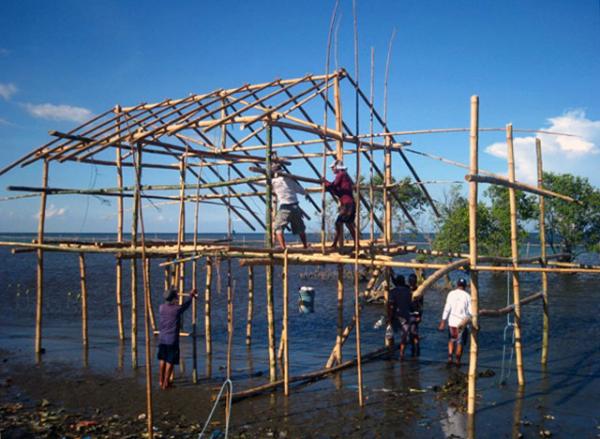 Orion, Bataan, Philippines — On a normal day, these fishers are offshore making a living, today they are shaping their future.

"This is our primary source of livelihood. If we do not take care of it, there might be a time when we will have nothing to eat," says Mr. Laudico Perez, SUGPO President.

SUGPO, or the Samahang Ugnayan ng Pangisdaan ng Orion and which translates to 'prawn', submitted a proposal to the UNDP/GEF Small Grants Programme to protect fishery resources by mobilizing and strengthening the capacity of its member-organizations to rehabilitate six hectares of mangroves and reduce the incidence of illegal fishers in the Municipality of Orion.

"Who else will take care of it except for us who benefit from the sea? It is fortunate that the provincial government, and the Philippine Rural Reconstruction Movement (PRRM) supports us, making it possible for us to pursue our project," Mr. Perez added.

The proposal was approved last year following a series of site visits and discussions with SUGPO. Since its approval, the organization has planted about 20,000 mangrove seedlings covering two hectares in abandoned fishponds and degraded mangrove areas.

Two mangrove nurseries were established in Balut and Camachile, where propagules are nurtured prior to reforestation. Harvesting of propagules is conducted only during January to May because of limited propagules. Nonetheless, the organization encourages its members to continually collect propagules. Mangrove species nurtured include bakauan lalake (Rhizophora Apiculata), bakauan babae (Rhizophora mucronata), bungalon (Avicennia marina) and pagatpat (Sonneratia alba). Nipa seeds are also being propagated, and if successful will be planted along the rivers.

A guardhouse has also been established adjacent to the fishing grounds to deter illegal fishers. This also serves as an office for the SUGPO where regular meetings are held among the members.

The organization will be strengthening its mangrove reforestation and fishery surveillance operations in the coming months through capacity building for its members. One major activity is also to develop second-tier of leaders to ensure the continuity of the organization. An information and public awareness campaign will also be undertaken to increase the mass-based support for coastal and marine management in the Municipality.

The project is implemented as part of the Bataan Integrated Coastal Management Programme. This community-based initiative was approved under the SGP-PEMSEA Joint Communiqué and received funding support from the GEF/UNEP South China Sea Project.