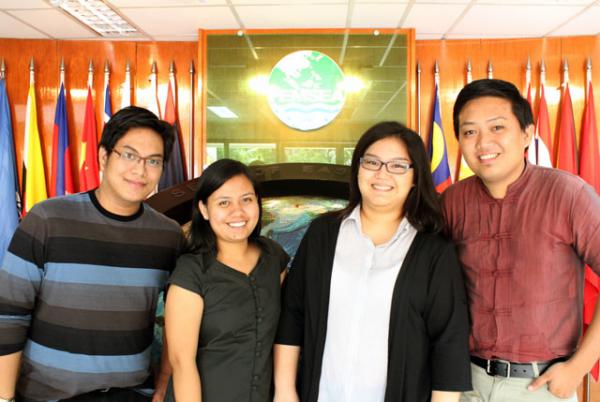 Ms. Jane Desiree Andal joins PEMSEA as a Research Assistant. She will assist in organizing the Fourth EAS Ministerial Forum and the Senior Government Officials' Meeting on the Sustainable Development Strategy for the Seas of East Asia. She will also be involved in the development of the Ministerial Declaration and the policy briefs on the blue economy. Prior to joining PEMSEA, Jane worked for various research projects specializing on the adaptive capacity of local governments to the impacts of climate change and on human-centered environmental ethics. She recently finished her bachelor's degree in Political Science and Economics from the University of the Philippines Visayas.

Ms. Nicole Marie Afable has a degree in Behavioural Sciences from the University of the Philippines Manila and is currently taking a masteral degree in Political Science in De La Salle University. She previously worked as a researcher for different government and nongovernment agencies, including the Center for Conscious Living Foundation, Inc. and the National Security Council of the Office of the President. As a Research Assistant in PEMSEA, Nicole will assist in developing policy briefs and other documents for the EAS International Conference, focusing on the workshops for 'Good Business, Good Governance.'

Mr. Dwight Jason Ronan joins PEMSEA as a Communications and Youth Forum Assistant. He will primarily be involved in the preparations and conduct of the Third East Asian Seas Youth Forum. He will also assist in researching and developing several communication materials for the EAS Congress 2012. Dwight has a degree in Development Communication from the University of the Philippines Los Baños. Since finishing his degree in 2008, he has worked with different development organizations in Southeast Asia, most extensively in Myanmar. At present, he is also spearheading a regional project in several Asia Pacific countries on community youth work supported by the British Council's Global Changemakers and UNESCO.

Mr. John Christian Castillo graduated from the UP College of Fine Arts with a degree in Visual Communication and Design. John has worked as Creative Consultant for various companies such as Rustan's Corporation, Megaworld Corporation, and Diageo Philippines. He has also worked with advertising agencies such as McCann Erickson, Ogilvy & Mather and Saatchi & Saatchi Philippines. As a Graphic Artist in PEMSEA, John will work with the Communications and Exhibition Team in conceptualizing and designing the exhibit centerpiece and panels. John will also be working on producing the communicating materials for the EAS Congress 2012. John also worked with PEMSEA in the EAS Congress 2009.