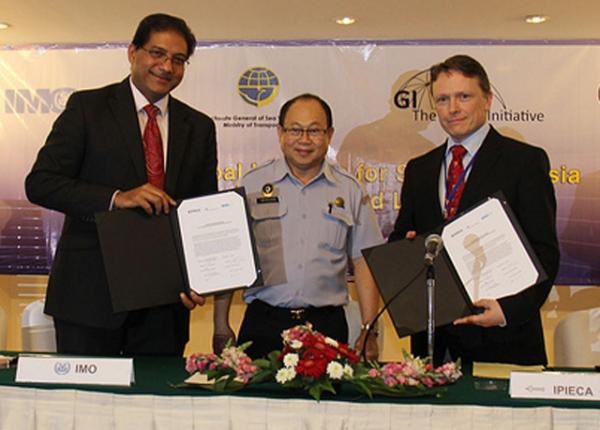 Jakarta, Indonesia — In recognition of its coverage and work in the Seas of East Asia, PEMSEA was requested to participate in the Executive Steering Committee of the Global Initiative for South East Asia (GI SEA) during the workshop and launch of the GI SEA on 20–21 March at the Hotel Borobudur in Jakarta, Indonesia.

PEMSEA Acting Executive Director and Chief Technical Officer Stephen Adrian Ross was pleased to accept the invitation as an opportunity to build broader linkages between the GI SEA and the SDS-SEA across the East Asian Seas region. Seeing how the two initiatives share similar objectives and targets, Mr. Ross invited Mr. Joselito Guevarra, project manager of the International Petroleum Industry Environmental Conservation Association (IPIECA), to introduce the GI SEA at the EAS Council meeting on July 2013 and officially invite PEMSEA to sit on the Committee.

The newly launched GI SEA is part of the Global Initiative (GI) umbrella program established in 1996 by the International Maritime Organization (IMO) and IPIECA, a global oil and gas industry association for environmental and social issues. The GI provides a body for cooperation between governments, the oil and gas industry, IMO and IPIECA to assist countries in developing their capabilities for oil spill preparedness and response, thus reducing the level of oil spill risk in priority locations around the world.
The GI SEA workshop led to the agreement of seven participating ASEAN countries (Brunei, Cambodia, Indonesia, Malaysia, Myanmar, Philippines and Thailand) and various IPIECA member companies—including BP, Chevron, ConocoPhillips, ExxonMobil, Petronas and Shell—to collaborate and improve oil spill prevention, preparedness and response in Southeast Asia.
At the regional level, a GI SEA Executive Steering Committee will be established to oversee and coordinate activities among countries, including subregional trainings and workshops, collaborative planning and implementation of joint activities. The Committee will be chaired by IPIECA, with representation from each participating country and industry, IMO, PEMSEA and the ASEAN Marine Technical Working Group.
The workshop closed with the signing of a Statement of Intent between IMO and IPIECA, marking the official launch of the GI SEA.