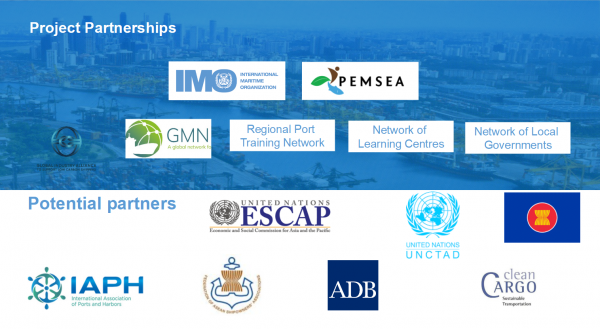 Maritime transport is a key contributor to the global economy, carrying 90% of international trade and thus significantly contributing to global economic development. Around 60% of maritime transport passes through the shipping lanes of East Asia, making it a key region for international shipping. With its benefits, shipping brings some downsides. It is a significant and increasing contributor to global greenhouse gas emissions, as well as to other forms of pollution. As the global population and economy expands, it is expected that the shipping sector will continue to expand alongside it. This means that efforts to reduce the environmental impacts of shipping are crucial to meeting global ambitions such as the Paris Agreement on climate change.

Seeking to contribute to tackling the global challenge, the International Maritime Organization (IMO) and Partnerships for Environmental Management in the Seas of East Asia (PEMSEA) are developing the Blue Solutions project, which will bring together various countries in the East Asian region to work on pilot projects aimed at reducing the environmental impact of their ships-port system. This project is funded through the German Government’s International Climate Initiative (IKI). Initial development of the project is taking place this year, with the full project expected to run from 2022 to 2026.

On 28 June 2021, PEMSEA hosted a Regional Kickoff meeting to introduce the project to participating countries and other relevant stakeholders. There were over 100 attendees to this virtual event, which laid the foundation for more specific bilateral meetings in the upcoming months.

The meeting was opened by Dr Jose Matheickal from the IMO, who provided an overview of previous IMO projects on greenhouse gas emissions and other ongoing projects. He was followed by Dr. Sabine Lattemann from the German Federal Ministry for the Environment, Nature Conservation and Nuclear Safety (BMU), who noted the commitment of Germany to its climate goals, and introduced the International Climate Initiative (IKI). IKI has funded 750 projects in over 60 countries, and is seeking to further contribute to maritime transport emissions. Closing the opening remarks was Ms. Aimee Gonzales from PEMSEA, who introduced the work PEMSEA carries out as a regional organization in East Asia, and highlighting the timing of the upcoming East Asian Seas Congress in December 2021.

The core of the project was introduced by Ms. Nadine Bresemann of PEMSEA. Each participating country will have a demonstration pilot project, which focuses on the ships, port operations, or hinterland goods transport. These projects are to be designed in a way that they can be monitored, scaled up, and replicated. 15 million euros will be available to support these projects. Pilot study selection is expected to take place over the upcoming months.

As bilateral meetings are completed over the upcoming months, a full regional project proposal will be developed for implementation from 2022-2026.