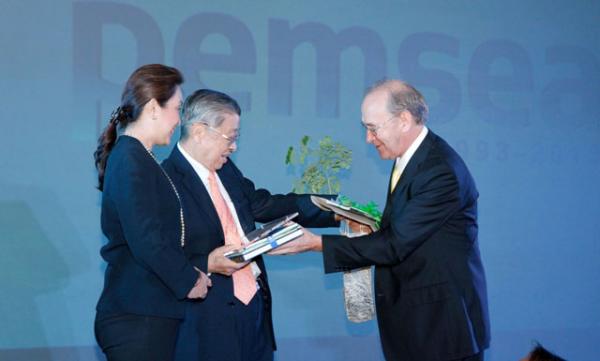 Manila, Philippines — The Partnerships in Environmental Management for the Seas of East Asia (PEMSEA) marked 20 years of spearheading the sustainable development of the East Asian Seas in a momentous celebration held on 10 July at the Diamond Hotel in Manila, Philippines.

Carrying the theme "People, Partners, Progress: 20 Years of Partnerships for Our Shared Seas," the members of the East Asian Seas Partnership Council (Country and Non-Country Partners), collaborators, sponsoring agencies, and current and former staff of the PEMSEA Resource Facility (PRF) gathered to celebrate the accomplishments, growth and partnerships that have been established by PEMSEA for the past two decades. The event was also attended by representatives from the business sector, universities, local government units from integrated coastal management (ICM) sites, and embassies of the East Asian Seas nations.
In his opening remarks, Dr. Chua Thia-Eng, credited for leading PEMSEA on its formative years, shared how PEMSEA's achievements in implementing the Sustainable Development Strategy for the Seas of East Asia (SDS-SEA) and enhancing the capacities of local governments on ICM for the past 20 years have already gained worldwide recognition. Thus, Dr. Chua encouraged partners to continue working together to support PEMSEA as it expands and contributes services and expertise not only for the East Asian Seas but also outside the region.
Senator Loren Legarda of the Philippines graced the anniversary celebration as the keynote speaker. A staunch advocate and legislator for the environment, Senator Legarda lauded PEMSEA's initiative to strengthen ICM efforts and cited this as a crucial contribution to sustainable development, disaster risk reduction and climate change–related efforts in the region.
Also present to congratulate PEMSEA on its 20th anniversary were Mr. Stephen Adrian Ross, Acting Executive Director of the PRF; Atty. Analiza Teh, Undersecretary of the Department of Environment and Natural Resources (DENR) of the Philippines; Ms. Luiza Carvalho, Resident Representative of the United Nations Development Programme in the Philippines; Dr. Zhang Zhanhai, Director General of the State Oceanic Administration (SOA) of PR China; Commissioner Heherson Alvarez of the Climate Change Commission of the Philippines; and Prof. Raphael P. M. Lotilla, former PRF Executive Director.
At the event, PEMSEA gave recognition to the outgoing chairs of the East Asian Seas Partnership Council — Council Chair Dr. Chua Thia-Eng, Intergovernmental Session Chair Dr. Li Haiqing and Technical Session Chair Mr. Hiroshi Terashima — and also to Prof. Raphael P. M. Lotilla for their invaluable contribution in providing guidance and support to the organization. PEMSEA also received recognition from the DENR of the Philippines for bringing the sustainable development of Philippine coastal areas into a higher level of conscious effort.
The occasion became more memorable thanks to the special performances of the Virlanie Children's Choir and shadow theater group, El Gamma Penumbra.
Over the years, PEMSEA has evolved from a marine pollution demonstration project in 1993 to a regional coordinating mechanism and international organization focusing on the implementation of the SDS-SEA. Today, PEMSEA is transforming into a self-sustaining international organization for coastal and ocean governance at the forefront of establishing dynamic partnerships among stakeholders working to address threats to marine and coastal ecosystems in the region.