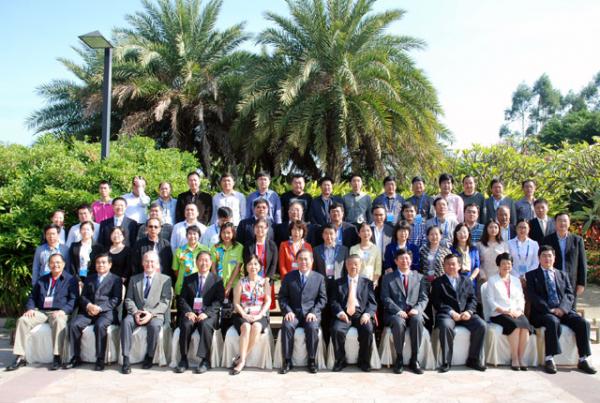 Xiamen, PR China — The State Oceanic Administration of PR China (SOA) convened the PEMSEA Achievement Exchange Meeting and the Symposium on the 20th Anniversary of PEMSEA Implementation in China during the Xiamen World Ocean Week (XWOW) 2013 as a move to commemorate two decades of partnership between PEMSEA and China.

Dr. Chua Thia-Eng highly commended PR China's commitment to sustainable coastal development. He shared, "For the last 20 years, China had stood up to its pledge to support the project not only in terms of using its own human and financial resources to augment policy and legislative improvements but also to instill in their national and local policy the concept of integrated planning and management for sustainable development."

Dr. Zhang Zhanhai, Director-General of the International Cooperation Department of SOA, presented a report reviewing the background and development of the PEMSEA program in PR China. During the previous three phases of the program, the ICM concept has been developed from scratch and local management modes and innovative practices were gradually formed and successfully implemented. This has provided PR China with useful experience in mainstreaming ecosystem-based concepts and methods in ocean planning and management, enriching and perfecting ICM methods and technology, building active and innovative ICM teams in the country, and increasing public awareness for the protection of the marine environment.

Mr. Chen Lianzeng, SOA Vice Administrator, fully confirmed the role of PEMSEA in integrating ICM into national and local policies and plans and supporting capacity development in ICM implementation. He expressed his gratitude to local governments, marine departments and experts providing long-term support to ICM implementation in PR China. Mr. Chen also affirmed SOA's continuous support to PEMSEA in actively promoting and guaranteeing the successful implementation of PEMSEA's next project phase in PR China. The fourth phase of the PEMSEA program, to be implemented on 2014–2018, has been officially approved by the Global Environment Facility (GEF) and is now on its preparatory stage.

Another highlight of the celebration is the presentation of PEMSEA's anniversary publication, Perspectives on Building a Regional Mechanism for Coastal and Ocean Governance in the Seas of East Asia. Amb. Seet-Cheng hopes that the book will further strengthen the region's commitment to the shared vision of PEMSEA and the implementation of the Sustainable Development Strategy for the Seas of East Asia (SDS-SEA). The book, launched at an earlier date at the 45th GEF Council Meeting in Washington, DC, showcases the experiences of regional and global leaders and champions who helped shape PEMSEA's journey toward building meaningful partnerships in coastal management, ocean governance and sustainable development.
Along with an exhibit of the ICM journey in China and a video presentation of PEMSEA's practices supporting an ocean-based blue economy, an overview of PEMSEA's next phase was also presented at the event to familiarize partners and collaborators with key objectives and components of the fourth phase, as well as desired outcomes and time-bound targets to be achieved by the project in China.
PEMSEA's work in China can be traced back to 1993 in the city of Xiamen where a pilot demonstration site in ICM was set up to focus on marine pollution prevention and management. Twenty years later, 19 coastal cities in China representing more than 21 percent of China's coastline have committed to use ICM as the main tool to promote blue economy development.
As continuation of the partnership, future initiatives between China and PEMSEA include joint establishment of the China-PEMSEA Sustainable Management Cooperation Center and formulation of a project proposal for funding by the China-ASEAN Maritime Cooperation Fund in support of SDS-SEA implementation beyond 2015.