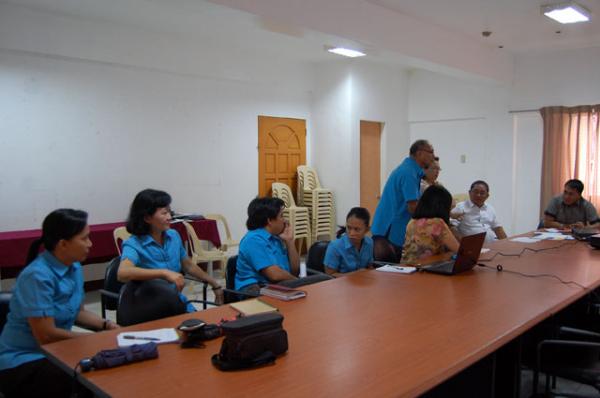 In Guimaras, an ICM parallel site in the Philippines, PEMSEA made a courtesy call to the newly elected governor, Dr. Samuel Gumarin, last 27 August. Ms. Nancy Bermas, Senior Country Manager from the PEMSEA Resource Facility (PRF), updated Dr. Gumarin of the role of PEMSEA in the province's ICM program and the role of Guimaras in contributing to scaling up ICM initiatives in the Philippines, as well as in the East Asian Seas region. Ms. Bermas introduced the Sustainable Development of Coastal Areas (SDCA) framework, the ICM process and the core ICM tools and methodologies that were applied in the development and implementation of ICM in the province.

Representatives from the Guimaras Environment and Natural Resources Office, where the Project Management Office is lodged, updated Governor Gumarin on the key activities and outputs completed under the ICM program. The establishment of the ICM coordinating mechanism was particularly highlighted, including the completion of the State of the Coasts report of Guimaras and the development of the Guimaras Coastal Strategy and Implementation Plan. The opportunities provided by the ICM program in terms of building local capacity and partnerships with various agencies and donors — such as the Korea International Cooperation Agency (KOICA), Philippine Business for Social Progress, U.S. Peace Corps Volunteers and UNDP-GEF Small Grants Programme — were also highlighted.
The wealth of experiences and achievements of the province in implementing ICM over the past five years drew the interest and commitment of Dr. Gumarin. At the meeting, the Governor expressed his appreciation to PEMSEA for continuously supporting the ICM program in Guimaras and in turn affirmed his commitment to sustain the partnership. Dr. Gumarin particularly appreciated the mechanism that has been established to facilitate ICM coordination in the province. He also recognized the SDCA framework as instrumental in facilitating the convergence of efforts of various sectors and stakeholders in the province. Further discussion revolved on how integration and coordination can be strengthened among the various players to reduce overlap and maximize resources.
Guimaras indeed has come a long way since 2006, when 2 million L of bunker fuel spoiled its shores, making it the worst oil spill incident in the country's history. The environmental crisis became the catalyst for the provincial government to adopt the ICM approach in partnership with PEMSEA. Today, the island province is an exemplary site and has shown maturity by mainstreaming priorities for ICM into the Guimaras Medium-term Development Plan of 2014–2019.
The expected outcomes from ICM implementation — particularly conserving the natural ecosystems, enhancing the quality of life of the coastal communities and strengthening local coastal governance — complements the sustainable development vision of Guimaras as a rising agro-tourism capital in the Western Visayas region.