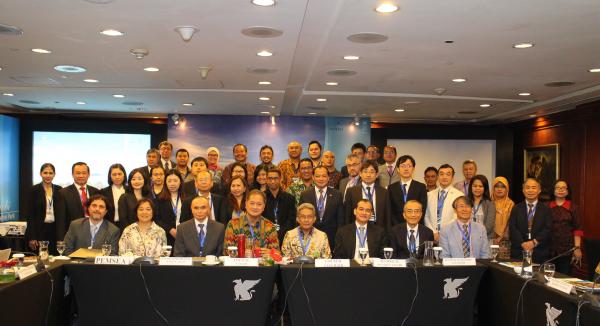 Representatives from PEMSEA country partners, non-country partners and other collaborators gathered at the 11th East Asian Seas (EAS) Partnership Council Meeting held from 24-26 July in Surabaya, Indonesia, to discuss and review PEMSEA’s body of work in support of the region’s common vision of sustainable development of the Seas of East Asia.

In his welcoming remarks, Mr. Karliansyah, the Director General for Environmental Pollution and Degradation Control of the Ministry of Environment and Forestry, Indonesia, emphasized, “We see that cooperation among countries in the East Asian Seas is a good opportunity for capacity building and knowledge transfer in the context of sustainability of coastal and marine development.”

Recognizing the importance of collaborations in discussing coastal and marine concerns in the region, PEMSEA partners also shared their relevant programs and commitments during the meeting.

PEMSEA's partners also expressed their continuous support to PEMSEA. Deputy Country Director Mr. Enrico Gaveglia of the United Nations Development Programme, for one, expressed, “UNDP has been and will remain strong in its commitment on sustainable coasts and oceans in the region and will continue to support PEMSEA hopefully up to a golden anniversary at least.”

The 11th Partnership Council Meeting was organized by the PEMSEA Resource Facility in collaboration with the Ministry of Environment and Forestry (MOEF), Indonesia and support from the Local Government of Surabaya.