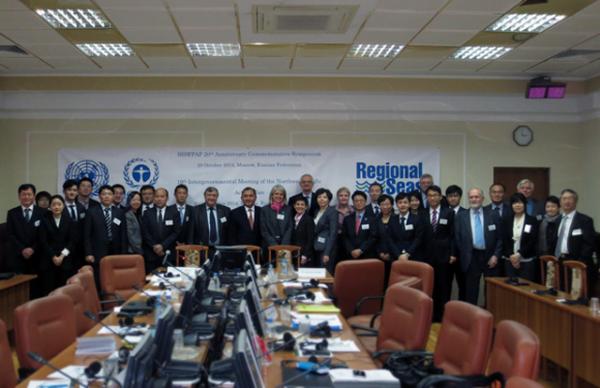 19th IGM held in Moscow The 19th NOWPAP Intergovernmental Meeting (IGM) was convened on 20-22 October 2014 in Moscow, Russian Federation.  The meeting was participated in by delegates from NOWPAP member states (China, Japan, Korea and Russia) as well as directors and representatives of NOWPAP Regional Activity Centres, UNEP Headquarters and United Nations Office at Nairobi.  The meeting reviewed the progress of NOWPAP implementation in 2013-2014 and discussed the financial rules and procedures for the NOWPAP funds with an agreement to establish working capital reserve for the NOWPAP accounts.  The meeting agreed to the scale of contributions for 2015 by each member state, and conducted intensive discussion on appropriate measures to secure the future financial sustainability of the NOWPAP RCU offices, but final decision has not been made.  To continue the discussion, member states will have dialogue through correspondence and the second NOWPAP Extraordinary IGM might be convened in early 2015 in RO Korea.  The 20th regular NOWPAP IGM will be held in China in 2015. Marking the 20th anniversary of NOWPAP, a commemorative symposium was held prior to the 19th IGM on 20 October 2014 in Moscow where presenters from NOWPAP member states and UNEP Headquarters reviewed the achievements in the past 20 years and suggested the way forward with concrete recommendations. 2014 PICES annual meeting Representatives of NOWPAP RCU and RACs participated in the 2014 PICES annual meeting held in Yeosu, RO Korea.  The joint Study Group was established in 2013 to explore possibilities of enhancing future collaboration between NOWPAP and PICES. Members of the Study Group met in Yeosu on 15-16 October 2014.  At the meeting, several potential areas of interest were discussed in detail and priorities of both organizations were assigned to each area.  After scoring those priorities and considering practical possibilities of joint actions (e.g., organizing joint workshops/sessions, preparing joint reports, having capacity building workshops and training courses, etc.), five areas of collaboration were chosen as priority ones for the next five years: harmful algal blooms; marine pollution; invasive species; biodiversity conservation; and ecosystem status reporting.  All four NOWPAP RACs will be involved in such collaborative activities in the coming years.  Using this opportunity, NOWPAP representatives also attended several sessions which NOWPAP is interested in including the one on the sources, transport and effects of micro/macro plastics in the ocean which was co-sponsored by NOWPAP. Recently, PICES and NOWPAP jointly published the proceedings of the workshop on economic impacts of harmful algal blooms on fisheries and aquaculture. Proposals for PICES 2015 accepted The Science Board of PICES recently approved the proposals submitted by NOWPAP CEARAC and MERRAC to have joint workshop/session during the next PICES Annual Meeting to be organized in October 2015 in Qingdao, China. A 1-day joint workshop on "Identifying major threats to marine biodiversity and ecosystems in the North Pacific" suggested by CEARAC has been included in the program for PICES-2015. The MERRAC suggested topic session on "Marine pollution preparedness and response to oil and HNS spill incidents in the North Pacific” has become part of the workshop on "Marine environment emergencies: detection, monitoring and response." Based on the priority areas of cooperation which were identified by the PICES-NOWPAP Joint Study Group, these two activities will enhance the partnership between PICES and NOWPAP. NOWPAP at the 16th GMRS Joining the other Coordinators, Chairpersons and Executive Secretaries of 16 Regional Seas Conventions and Action Plans (RSPs) as well as representatives of relevant multilateral environmental agreements, UN agencies and other organizations, a NOWPAP representative attended the 16th Global Meeting of Regional Seas Conventions and Action Plans (GMRS) from 30 September to 1 October 2014 in Athens, Greece. The 16th GMRS focused on strengthening the role of RSPs in implementing the Sustainable Development Goal on Oceans set at Rio+20, fostering Global Partnership on Marine Litter and developing a roadmap for RSPs for the next 10 years and beyond. The NOWPAP reported to the meeting the progress made by NOWPAP contributing to the Regional Seas Strategic Directions agreed upon in 2012, and discussed with some Regional Seas colleagues (HELCOM, MAP and OSPAR) possible cooperation in developing the Ecological Quality Objectives for the NOWPAP region. For more details, please check http://www.iisd.ca/oceans/rscap/2014/ http://www.unep.org/regionalseas/globalmeetings/default_ns.asp 12th POMRAC Focal Points Meeting and Workshop NOWPAP Pollution Monitoring Regional Activity Centre (POMRAC) convened its 12th Focal Points Meeting on 4-5 September 2014 in Busan.  POMRAC focal points and experts of Japan, Republic of Korea and Russia as well as representatives of CEARAC and MERRAC attended the meeting.  Representatives of NOWPAP partners — OSPAR, PEMSEA, PICES and YSLME — participated as observers.  The meeting reviewed the activities implemented since the 11th POMRAC Focal Points Meeting and discussed the implementation plans for the POMRAC activities in 2014 and 2015, including development of ecological quality objectives (EcoQOs) for the NOWPAP region, capacity building on integrated coastal and river basin management and public awareness raising on marine litter problem.  Prior to the meeting, a workshop was convened on 3 September 2014 on setting EcoQOs for the region where NOWPAP partners played an important role sharing their experience and expertise.