New Members and New Leadership as PNLG Prepares for 2013 Forum 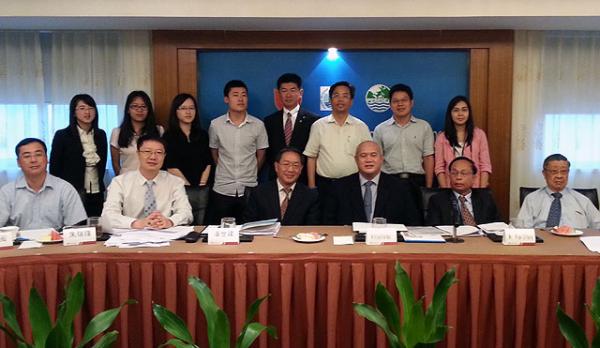 Xiamen, PR China — The PEMSEA Network of Local Governments for Sustainable Coastal Development (PNLG) ushered in four new regular members and a change in leadership during their Fourth Executive Committee Meeting held in Xiamen on 27 May.

The Executive Committee agreed to accept the membership applications of Shima City, Japan; Northern Selangor, Malaysia; and Changyi City and Qinzhou City, both from PR China. The formal induction of the four sites will be held at the General Assembly of the forthcoming PNLG Forum 2013.

All four local governments were adopted as regular members based on their commitment in implementing Integrated Coastal Management (ICM) programs, strong enthusiasm to join the PNLG and a clear commitment to adhere to the PNLG Charter.
Shima in Mie Prefecture, Japan, began using ICM in 2011 to create a blueprint for a "Satoumi City" and draw out a Shima City Basic Plan with a goal to realize a blue economy for the city. While these efforts are still relatively young, the gradual buy-in and implementation of ICM in the overall coastal and marine policies and programs of the city is already considered a significant achievement and a building block to further promote ICM in other local governments in Japan.
In Northern Selangor, Malaysia, the local government has successfully undertaken various efforts, which includes regulation of the emission and discharge of pollutants, development of an ICM plan and Integrated Coastal Use Zoning Plan and planting of more than 10,000 mangrove seedlings in collaboration with local communities.
Changyi City's initiatives include the development plan of an efficient ecological and economic zone in the Yellow River Delta, establishment of a dynamic monitoring and observation system of the sea area and a mechanism for the integration of land and sea in environment protection, among others.
Qinzhou City in southern China upholds the principle of "environmental protection together with economic development" through the strengthened implementation of ICM. Among the city's accomplishments are the formation of an ICM leadership group; a sea area use survey and efficiency assessment; a marine management system that involves four levels: village, district, municipality and town; and a series of restoration projects like sand beach restoration, coastline repair and mangrove planting.
The Executive Committee Meeting also confirmed the succession of PNLG Vice President Prak Sihara of Preah Sihanouk, Cambodia, as the new president beginning July 2013. This is in view of outgoing PNLG President Felipe Hilan Nava's forthcoming exit as governor of Guimaras, Philippines.
Governor Nava has served as PNLG President for only 10 months, yet the Executive Committee noted his active participation in various PNLG forums and other PEMSEA events even before his election as president. As a key advocate and champion of ICM, Mr. Nava is designated as an Honorary Adviser by the PNLG Executive Committee.
The meeting also served as a preparatory meeting for the PNLG Forum 2013 to be hosted by Shima City with the support of the Ocean Policy Research Foundation (OPRF) of Japan in the last quarter of 2013. The participation of Shima City as the first site from Japan to apply for the PNLG is considered a significant breakthrough after several years of encouraging the country to adopt the ICM approach. The hosting of the upcoming forum also provides a positive indication on Shima’s and Japan's commitment to ICM implementation.
The committee also discussed the key governance documents that should be developed in support of the PNLG Charter. They also reviewed the key PNLG activities for 2013, with emphasis on its increased involvement in upcoming events such as the Fifth East Asian Seas Partnership Council Meeting in July and the Xiamen World Ocean Week 2013 in November.
The Fourth Executive Committee Meeting, hosted by the Xiamen Municipal Government and the PNLG Secretariat, was attended by Dr. Chua Thia-Eng, EAS Partnership Council Chair; Mr. Pan Shijian, PNLG Secretary-General; Mr. Liang Fengkui, Associate Counsel of the Department of International Cooperation, State Oceanic Administration (SOA) of China; and representatives from the Ocean Policy Research Foundation; Shima City, Japan; Changyi City, PR China; and the PRF Secretariat.