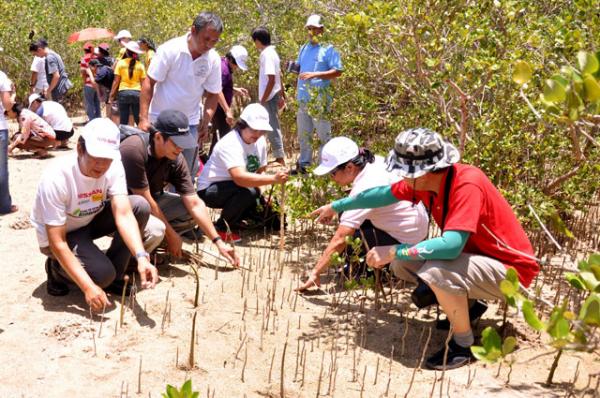 Calatagan, Batangas — Some 100 representatives of the business community, media, people's organizations, local government units, and international organizations trooped to Ang Pulo Mangroves in Calatagan, Batangas on May 15 for a media forum and mangrove planting activity. The multi-sector event dubbed "Conserve Marine Biodiversity, Conserve Life" forms part of the events organized for the International Day for Biological Diversity (IDB) 2012 and the National Oceans Month.

Mangroves, known in the Philippines as bakawan, are tropical, salt-tolerant trees or shrubs, often clustered together and can grow up to 25 meters. They are found mainly in marshy areas between the shore and the sea called inter-tidal zones.

"The territory occupied by the Philippines and the rest of the ASEAN Member States houses a third of the world's mangroves, coral reefs and seagrass areas. These ecosystems support the highest concentration of coastal and marine fauna and flora in the planet. An estimated 600 million people in the ASEAN region depend directly on these resources for food and income, which also forms the economic base for the fishing and tourism industries of the region. Thus, it is of great importance that we all contribute to conservation efforts," Mr. Rodrigo U. Fuentes, executive director of ACB, said.

For its part, NMPI believes that as a corporate citizen, it plays an important role to communicate and cooperate actively with the communities. "NMPI has formed various partnerships with international groups, citizen groups and government agencies to effectively promote real-world reductions in environmental impact," NMPI President and CEO Allen Chen said. "Through this event, we hope to go the extra mile in preserving biodiversity to complement our environment philosophy of achieving a symbiosis of people, vehicles and nature."

Journalists from Brunei Darussalam, Philippines and Thailand participated in the media forum at the mangrove site to highlight the importance of conserving marine habitats and species. Experts from the participating organizations will brief media representatives on the status of mangroves and marine biodiversity in the Philippines and the ASEAN region. The impact of climate change on marine biodiversity, as well as actions of people's organizations to conserve mangroves, was also discussed.

According to Dr. Dicky Simorangkir, International Expert of the ACB-GIZ Biodiversity and Climate Change Project, "Mangroves are one of nature's best ways of combating climate change because of their high capacity for sequestering carbon and their ability to limit the effects of sea level rise and extreme weather events linked to global warming. Conserving and restoration of mangrove areas should therefore be a high priority. We can benefit from the vast wealth of experiences and learning in mangrove conservation and restoration in the Philippines and other countries of the ASEAN and if these activities are continuously supported, we have a better chance of improving the region's adaptive capacity to climate change."

"Conserve Marine Biodiversity, Conserve Life" forms part of a series of media forums lined up under the ACB-GIZ Biodiversity and Climate Change Project. "The goal here is to help generate media awareness on the values of mangrove in relation to biodiversity conservation and climate change mitigation, as well as offer practical actions that can be implemented to contribute to solving the problem of marine life degradation. We recognize that crucial role that they play in bringing the story of biodiversity to millions of people," Mr. Fuentes said.

For more information on the activity, log on to www.aseanbiodiversity.org.