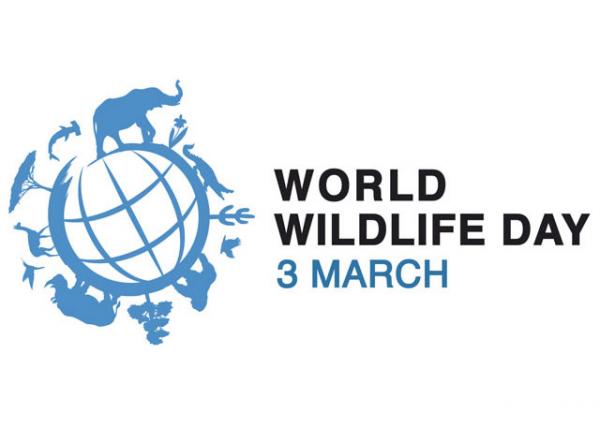 The woeful eyes of the panda, gentle bearing of elephants, majestic stance of lions and tigers, and the awesome power of whales always bring a sense of wonder to those lucky enough to witness them up close.  Healthy populations of wildlife are a good indication of the status of the world's forests, oceans, rivers and lakes. Unfortunately, many of these animals, as well as thousands of other species, can only be seen on wildlife documentaries, newspapers, and magazines. There is increasing urgency to address the loss of the world's wildlife and ecosystems, and government and conservation organizations have to act quickly to arrest global biodiversity loss.
Among many mechanisms to remind the world of one's responsibility for wildlife and environmental protection is the establishment of World Wildlife Day, which is celebrated annually on March 3. The secretariat of the Convention on International Trade in Endangered Species of Wild Fauna and Flora (CITES), in collaboration with other relevant United Nations organizations, facilitates the observance of World Wildlife Day. The theme for 2015 is ‘Wildlife crime is serious, let's get serious about wildlife crime'. The theme highlights the positive role that local communities can play in helping to curb illegal wildlife trade.According to the wildlife trading monitoring network TRAFFIC, wildlife trade is a flourishing billion dollar industry because of the worldwide demand for wildlife as food, fuel, fodder, building materials, clothing and ornaments, sport, medicine, as well as personal and religious collections. In the early 1990s, TRAFFIC estimated the value of legal wildlife products imported globally at around US$ 160 billion, which increased to US$ 323 billion in 2009.On the other hand, there are no exact figures for illegal wildlife trade, but this too likely runs into hundreds of millions of dollars. TRAFFIC reports that the value of illegal, unreported and unregulated fisheries alone has been estimated at between US$ 10-23 billion per year. The value of illegal international timber trade has been estimated at US$ 7 billion annually, and illegal wildlife trade, excluding timber and fisheries, at US$ 7.8-10 billion per year. This includes trade in some of the world's most rare and enigmatic species, most on the verge of extinction, including marine turtles, whales, rhinoceros, elephants, and many more species.These and many other factors highlight the need to urgently address local and global wildlife crime, to ensure that people continue to derive benefits. More stakeholders should be engaged in the fight against wildlife crime, particularly members of local communities, who best know their environment and wildlife found therein. Local communities stand to benefit the most from stopping illegal wildlife trade since it depletes the local resource base, affecting livelihoods and economies.In Southeast Asia, the ASEAN Centre for Biodiversity (ACB) is leading the celebration of World Wildlife Day. ACB Executive Director Roberto V. Oliva said World Wildlife Day is an opportunity to celebrate the many beautiful and varied forms of wild fauna and flora and to raise awareness of the multitude of benefits that conservation provides to people."World Wildlife Day reminds people, communities and organizations of the urgent need to step up the fight against wildlife crime, which has wide-ranging economic, environmental and social impacts," Director Oliva stressed.For more information on World Wildlife Day, log on to www.wildlifeday.org.
Article by: Sahlee B. Barrer, ASEAN Centre for Biodiversity