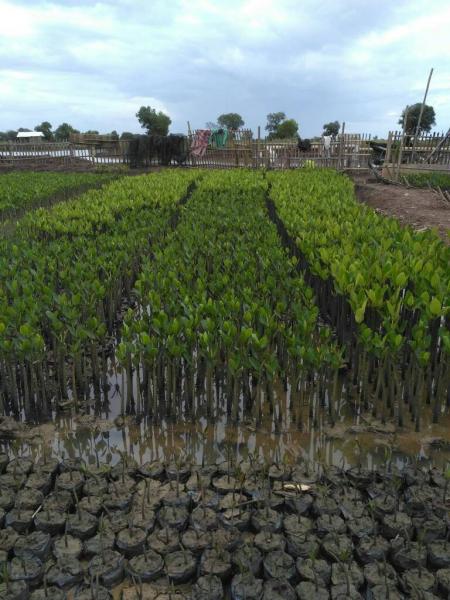 A mangrove nursery in the village of Patramanggala

Lying on the western edge of Greater Jakarta, the Tangerang Regency has become an enthusiastic proponent of Integrated Coastal Management (ICM). One of many flagship programs set up by the regency is Gerbang Mapan, which is tasked with bringing together different stakeholders to support sustainable development in the regency’s coastal areas. Pilot projects include a mangrove reserve, reforesting mangroves around commercial fish ponds, and creating environmental education activities for primary schools. ICM development in the regency is supported by PEMSEA as part of a GEF/UNDP Project on Scaling Up the Implementation of the Sustainable Development Strategy for the Seas of East Asia (SDS-SEA).

The outskirts of the world’s second largest urban area, on an island that holds over half the population of the world’s fourth-most populous country, seems an unlikely place to look for ecosystem recovery. Nonetheless, in the Tangerang Regency, which lies on the western side of Jakarta’s urban sprawl, the seeds of a reversal of a historical trend of nature loss are being sown.

Banten Province, on the western end of Java, once had a coastline covered in mangrove forest. However, rapid clearing of these forests to create fish and shrimp ponds, among other uses, has denuded the coastline. Even in forests not deliberately cleared, unsustainable harvesting for uses such as firewood continues to shrink mangrove coverage.

This clearing has had devastating effects. Mangrove forests are widely considered to bring huge benefits to the land surrounding them, supporting rich ecosystems, providing cover from storm surges, and stabilizing the land around them. With the mangroves gone, these benefits disappear. The flat land of northwest Java is particularly vulnerable. A combination of satellite images and ground validation show that in Tangerang Regency alone, coastal erosion has worn away least 579.79 ha of land.

A turn to sustainability

Growing awareness of these coastal issues has helped to focus minds. The medium-term development plan of the Tangerang Regency, which runs from 2013-2018, included a vision of an environmentally-friendly community engaging in balanced and sustainable development.

The initial implementation of this plan has been enthusiastic, with no fewer than 25 flagship programs launched by the Regency. One of the 25 flagship programs, convened under the leadership of Mr. Ahmed Zaki Iskandar, the Regent of Tangerang Regency, is the Gerakan Pembangunan Masyarakat Pantai Program (“Coastal Community Development Movement”, or Gerbang Mapan for short), which aims to stimulate sustainable development of the regency’s coastal areas. 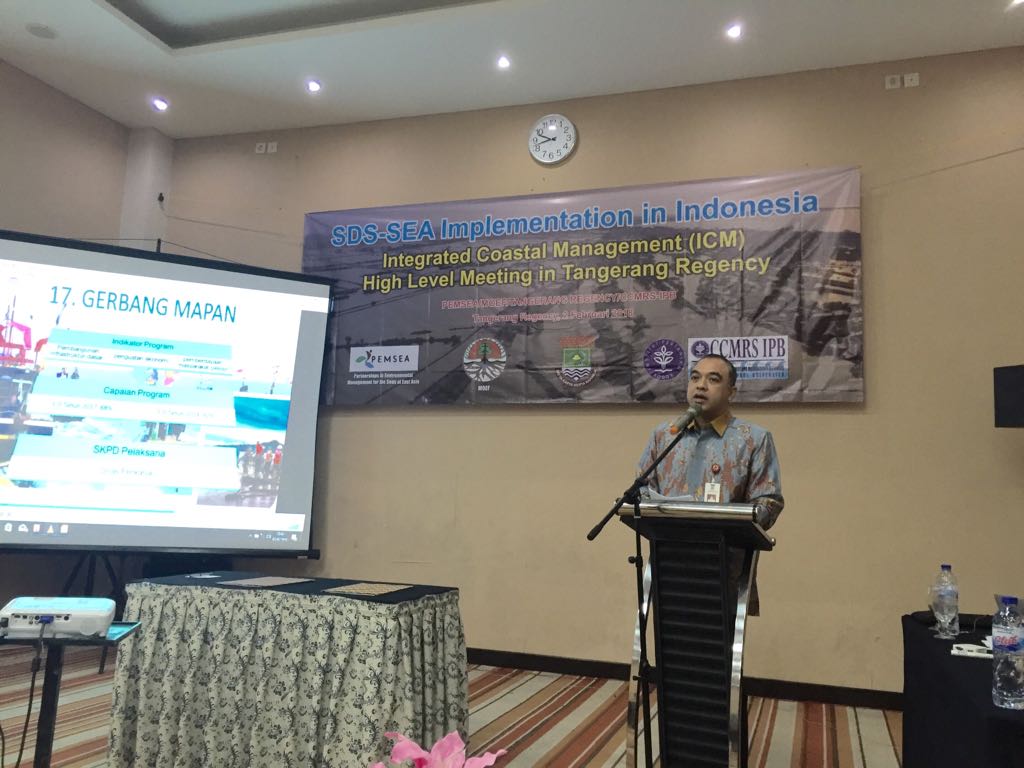 Gerbang Mapan started in 2014 under the auspices of the Regency’s Fisheries Agency. Utilizing Integrated Coastal Management (ICM) approaches, it has brought together relevant agencies and sectors to support economic growth, infrastructure development, and community empowerment in coastal communities.

There are big ambitions for Gerbang Mapan. Mr. Didin Syamsudin, head of Bappeda (the Planning Agency) in the Tangerang Regency, hopes it will eventually promote integrated planning between the government and the private sector, improve coordination with the provincial authorities, and build partnerships with other local governments. He also believes it could improve the facilities and income of local fishermen, and address pollution issues in coastal areas.

There were challenges in the implementation of Gerbang Mapan as well, including the lack of interest and commitment of villages to participate in the program. In 2015, implementation was focused on three villages that were able to complete village development plans. The villages received training and materials for mangrove seedling propagation, aquaculture farming, environment-friendly fishing gears, organic waste processing, and community water systems.

Persistent efforts since then to increase community awareness of coastal management has paid off. The initial pilot projects have already shown positive results. Ms. Erni Nurlaeni of the Spatial Planning Agency says that due to this, the program has become easier to continue and replicate in other villages. Local communities were often very receptive to the message of sustainable development, having directly experienced the impacts of issues such as coastal erosion and flooding, and so quickly came on board when improvements could be demonstrated. 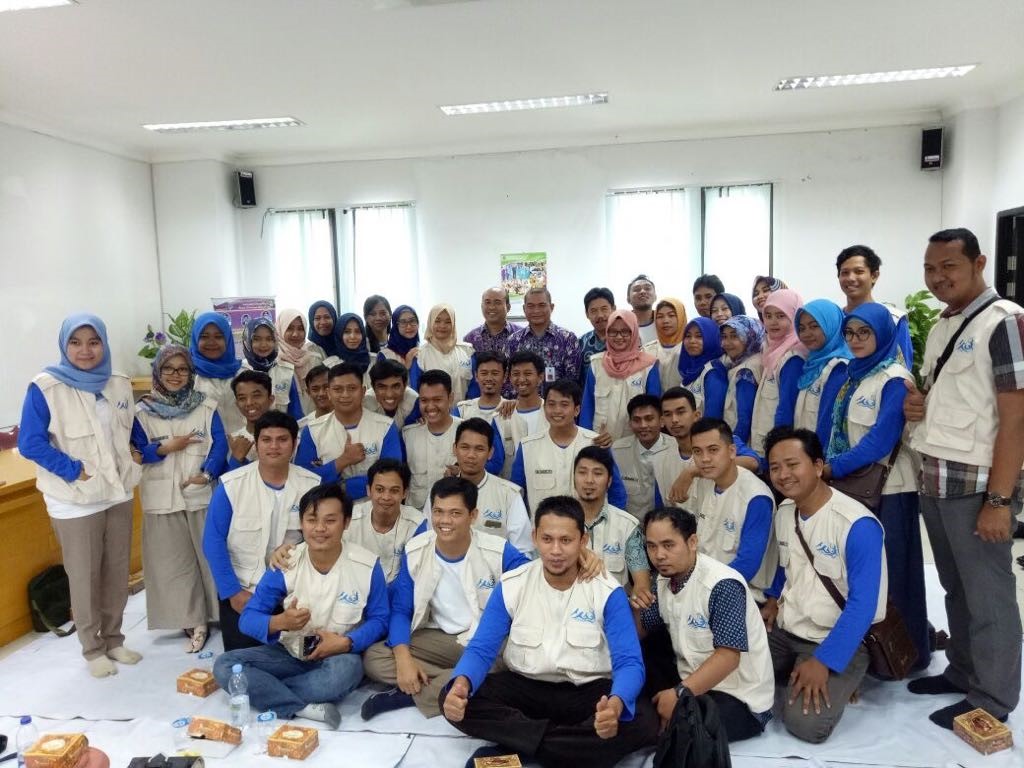 A volunteer group called Pesisir Mengajar was established in 2016 to support Gerbang Mapan’s education and awareness initiatives. Joining the group requires an application process, and successful applicants receive training in environmental protection and conservation. After training, members are deployed to one of the 32 primary schools in the Regency.

So far, Pesisir Mengajar has deployed a coastal education and awareness program they developed in over 30 primary schools. For 3-5 hours on a Saturday, 5th grade students participate in activities that aim to change their knowledge and understanding of waste management, environmental protection, and personal hygiene, health, and nutrition. Volunteers use this time to share their love of the sea. 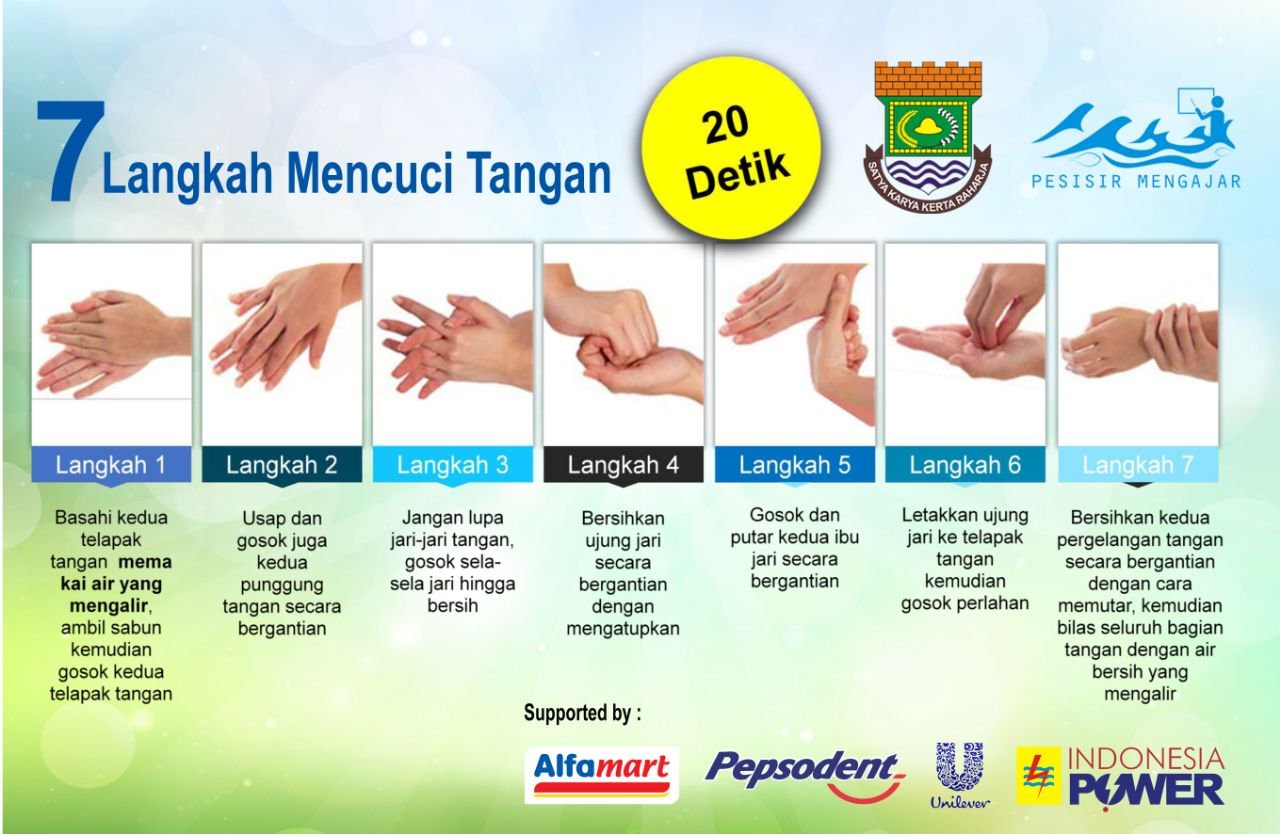 Many pilot sites are already showing promising results. In the coastal village of Tanjung Pasir, the Tangerang Mangrove Center is being created. An 100ha area that was formerly mangrove forest, the Center is one of the Tangerang Regency’s priority sites for mangrove restoration.

95ha of the area belongs to Perhutani, a state-owned enterprise, which in 2017 entered a 2-year Memorandum of Understanding (MoU) with Tangerang Regency to turn the area into a mangrove conservation and recreation center. By turning the area into both a mangrove forest and an area for the community to enjoy, the Center will provide a place for knowledge of the importance of the mangroves to spread.

As of 19 April, 30,000 mangrove seedlings from the Avicennia and Rhizophora genera had been planted in the area, and it is aimed to have 50,000 more planted by 2019. Once the replanting and infrastructure has been completed, the Center will open to visitors. 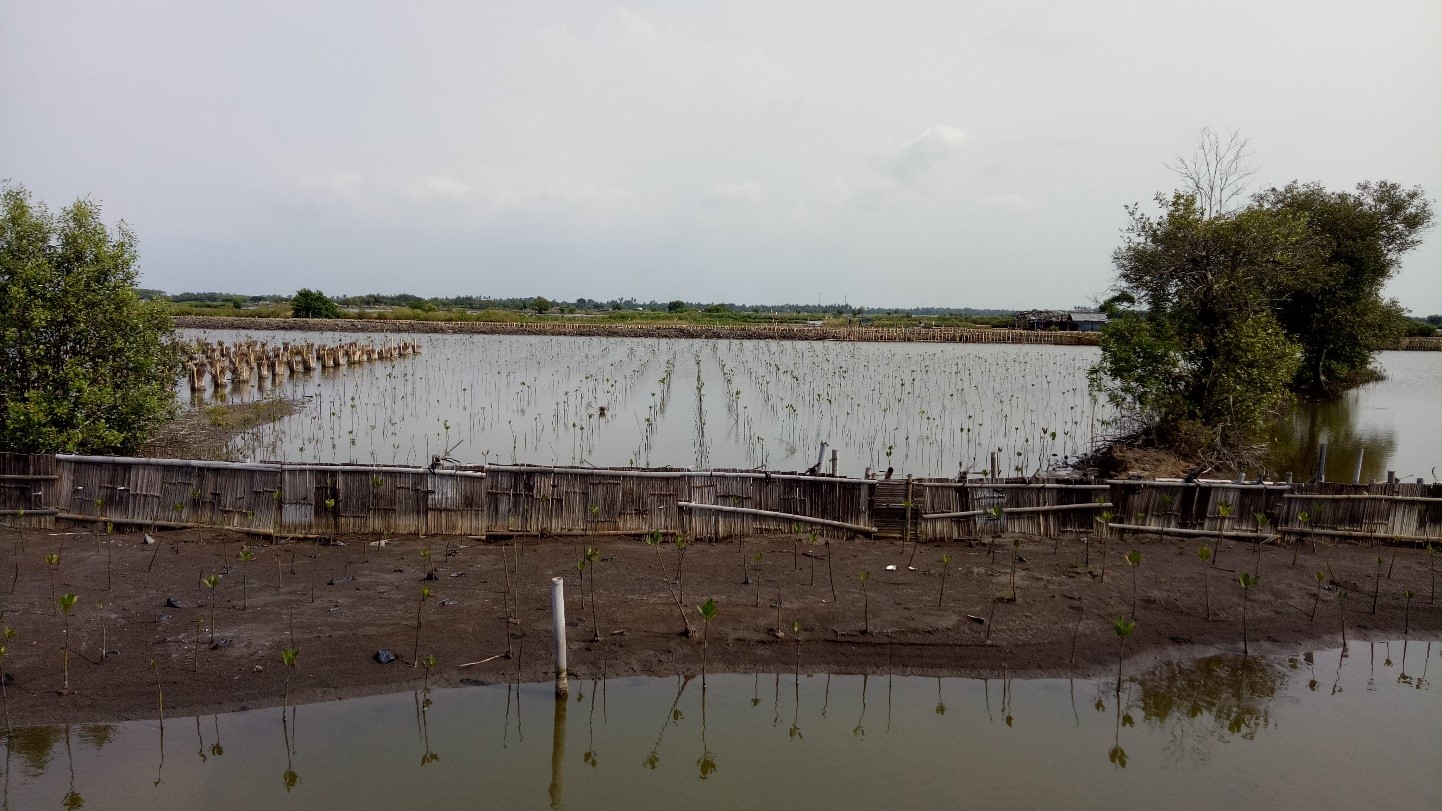 To the west, a different mangrove replanting effort is underway in the village of Patramanggala. As with Tanjung Pasir, its mangroves were cleared for milkfish and shrimp ponds. Unlike it however, the area is still farmed. Tunas Harapan, a community group that has leased around 8ha of land from Perhutani, is continuing to carry out fish and shrimp farming, while creating a mangrove nursery around their ponds.

While small, participants believe the initiative has already shown marked success. Mr. Mulyana, the head of Tunas Harapan, is enthusiastic about its multiple achievements. He finds the area to be much nicer since the mangroves were planted, with the mangroves making the area cooler and greener, while improving the quality of the water and the ecosystem. He also hopes the mangroves will arrest ongoing coastal erosion.

These environmental changes have produced economic benefits: shrimp seeds released into ponds now show a higher survival rate compared to frequent die-offs, and furthermore the mangroves have brought back a population of natural shrimp large enough to be harvested. Income from shrimp harvest has increased tenfold, and the community has also made some money selling mangrove seedlings to other areas, including the Tanjung Pasir project. 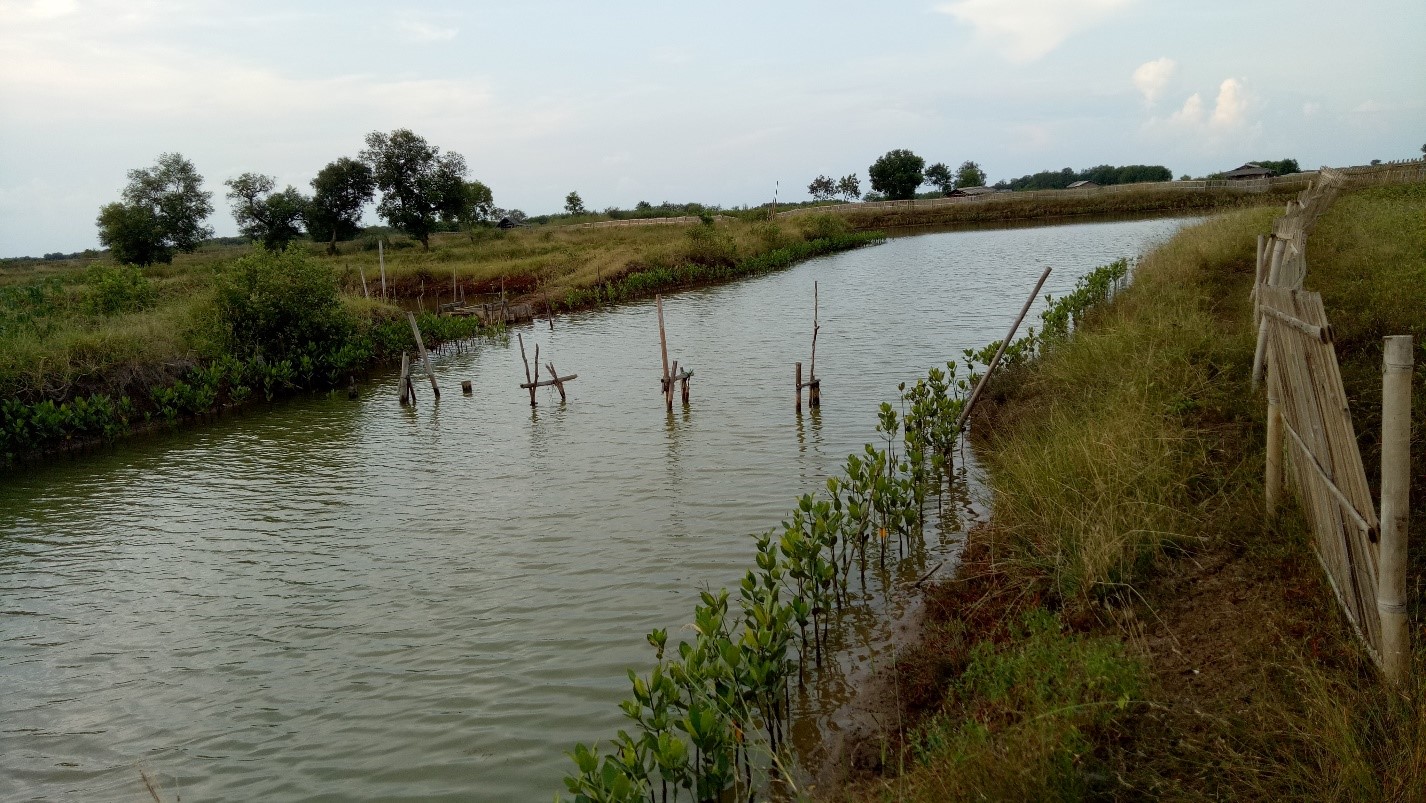 Mangroves line the sides of fishponds in Patramanggala.

Gerbang Mapan quickly succeeded in building partnerships with a range of stakeholders. In addition to working with the communities of the villages that hold its pilot projects, it has built relationships with national and provincial bodies, as well as with local media. Participants in its program exchange their knowledge and experience with others involved in ICM projects throughout Indonesia. 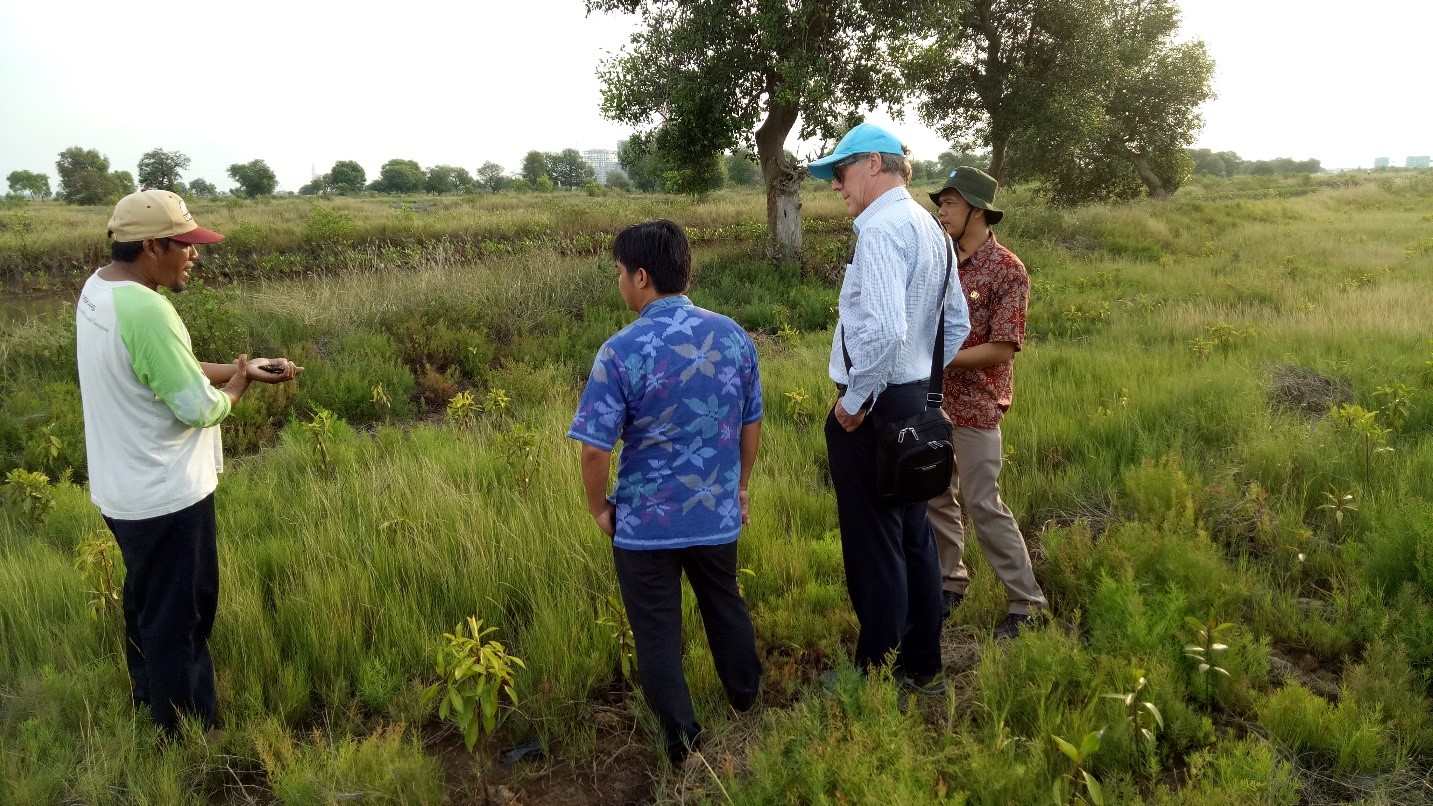 PEMSEA supports the implementation of Gerbang Mapan as part of a GEF/UNDP Project on Scaling Up the Implementation of the SDS-SEA (Sustainable Development Strategy for the Seas of East Asia). This project aims to strengthen ICM governance mechanisms in the regency while demonstrating ICM’s applications towards habitat rehabilitation and alternative livelihood through its pilot sites. The Tangerang Regency became a member of the PEMSEA Network of Local Governments, a forum for knowledge sharing among local governments implementing ICM programs, in 2016.

The SDS-SEA project has supported ICM orientation for local leaders, ICM training for personnel, and organized an ICM policy forum to improve coordination between the regency and the province in managing the coastal areas. It is also developing a State of the Coast reporting system to assess progress in implementing the Gerbang Mapan program and undertaking risk and vulnerability assessment of pilot sites. These assessments will provide inputs in improving program implementation considering natural, human induced, and climate change-related risks.

Private sector involvement has been encouraged as part of Corporate Social Responsibility programs. For example, the company PLTU Lontar Tangerang, which runs a power plant in Tangerang, has become a partner of Tangerang Regency in its ICM activities. It supports initiatives such as mangrove replanting and Pesisir Mengajar as part of its corporate social responsibility program. 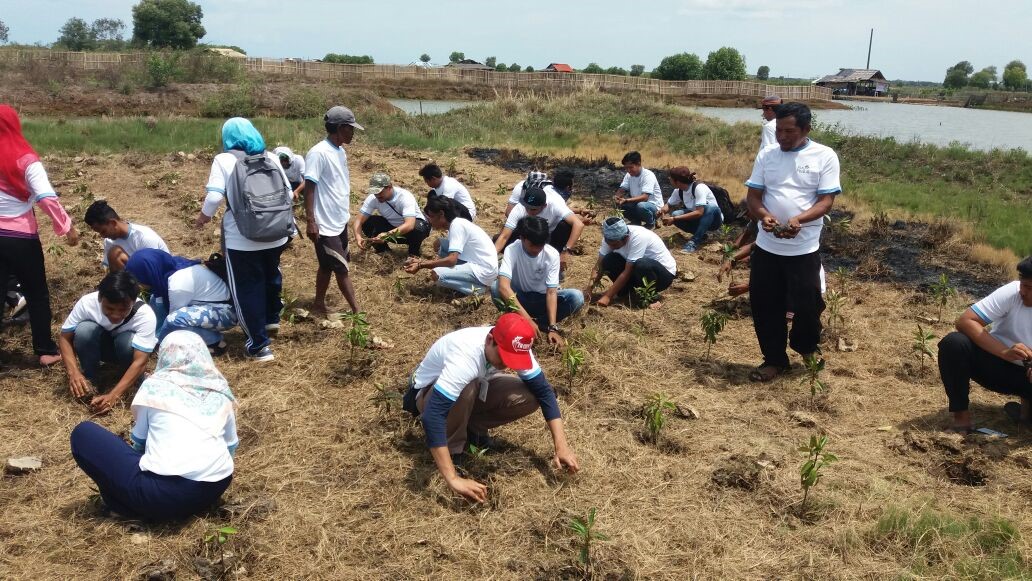 Future projects, such as a proposal to build 7 artificial islands on the Regency’s coast, highlight the need for an effective ICM program. The baseline State of the Coast report identified multiple challenges for ICM in the Regency, including limited inter-agency coordination, pollution, coastal erosion, and a limited water supply. Challenges also surround ongoing changes in regulatory authority, with responsibility for marine and coastal management shifting from Regencies and Cities to Provinces.

The need to institutionalize capacity development is another prominent issue. Mr. Hari Mahardika, Tangerang Regency’s ICM Program Coordinator, is especially concerned about ensuring that knowledge and training survive personnel rotations. He believes there is a need for a Training-the-Trainers program to cover continuing and effective delivery of the program. There is also a push to promote more female participation, as their inclusion is an important component of developing local support for ICM. For example, Pesisir Mengajar ensures its volunteers are made up of equal numbers from both genders.

Mr. Mahardika also believes that while mangroves and infrastructure have received strong attention under Gerbang Mapan, results from water management and education initiatives need to make a much larger impact.

Many of these issues are already beginning to be addressed. One suggestion is to move Gerbang Mapan from the Fisheries Agency to Bappeda, the Planning Agency of Tangerang Regency, which can better facilitate the inter-agency cooperation needed for implementing the Gerbang Mapan program. Another is to consolidate and streamline the 25 flagship sustainable development programs so that they are easier to assess and promote. 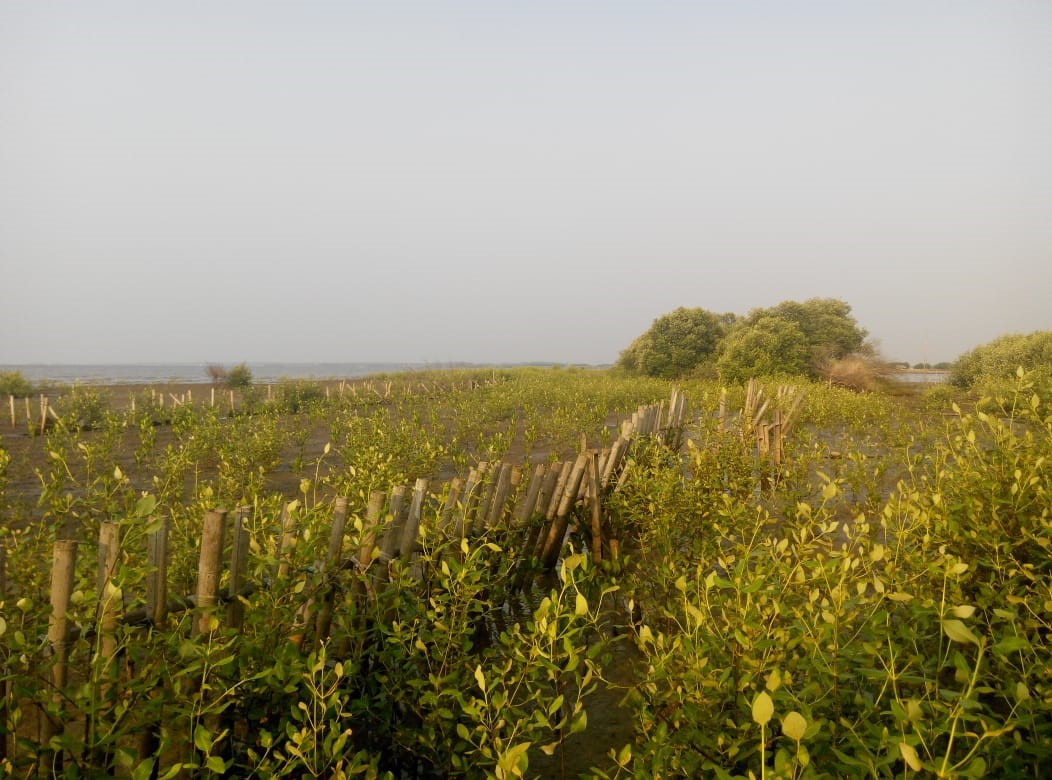 Young mangroves are supported by bamboo sediment traps in some areas of the coast. (Hari Marhardika)

One thing that unites all involved is belief in the good Gerbang Mapan can bring, and the importance of continuing its initiatives. Its successes have inspired those that work on it, and there is confidence that the program will overcome the challenges it faces and that its projects will show tangible results.

No matter what happens, the positive impact programs such as Gerbang Mapan have already had is clear. One volunteer for Pesisir Mengajar, Mr. M Furgon, joined the teaching initiative in addition to a full-time marketing job when it started two years ago. When asked how he feels about his role teaching children in less well-off areas, Mr. Furgon said he is simply grateful for the opportunity to make a difference.