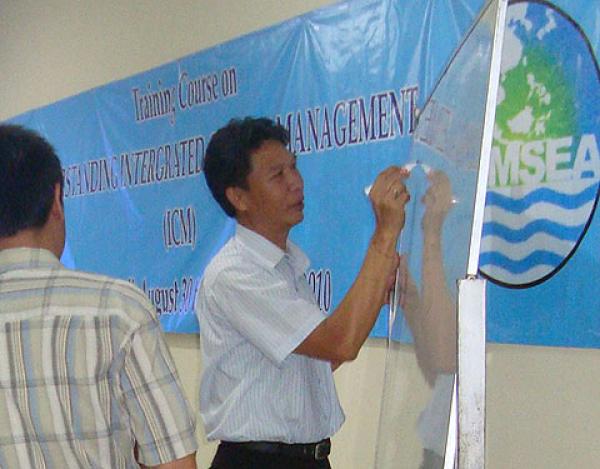 Bali, Indonesia — Efforts to build technical capacity in support of ICM scaling up in Indonesia and in the East Asian region recently received a boost with the successful conduct of the Training Course on Understanding Integrated Coastal Management, held in Bali, Indonesia on 30 August to 3 September 2010.

The course was participated in by 23 individuals from Indonesia representing the provincial government, regencies/city, academic institutions, nongovernmental organizations, and tourism establishments in Bali as well as the province of Nusa Tenggara Barat. Three participants from Timor-Leste also joined the training.The participants received lectures on the concept, principles, process, tools, and good practices of ICM as well as practical applications through workshops and field visits. The workshops led the participants through the process of preparing for an ICM program including the establishment of ICM coordination and management mechanism and preparation of a road map for ICM program development and implementation. The site visits aimed to showcase integrated approaches, partnerships and community participation for habitat protection and rehabilitation, pollution reduction and waste management, food security and livelihood management and sustainable tourism development. The sites visited included the Denpasar Sewerage Development Project, SARBAGITA integrated waste management facility, Mangrove Information Center, Mertasari Beach to highlight community efforts in developing and managing a natural beach area, and Serangan Island to showcase coral and seahorse culture by fisherfolks. Contributions of each program to climate change adaptation and mitigation were also emphasized.The training also underscored mandated actions for the integrated management of marine and coastal areas as required by the Indonesian National Act (NA) 27/2007 on Management of Coastal Zones and Small Islands and NA 32/2009 on Environmental Management and Protection. NA 27/2007, for example, requires each local government in Indonesia to develop a coastal strategy and related management and action plans, as well as land and sea use plans. The training highlighted how the ICM process contributes toward meeting these requirements.Started in the year 2000, with four regencies and one city in the southeastern coast and covering 219 km of coastline, the ICM program in Bali now includes the entire 430 km of provincial coastline covering a total of nine regencies/city. ICM development and implementation in other areas in Indonesia is also underway as part of the national ICM scaling up program.The training course was organized by PEMSEA and the Environmental Board of Bali Province using PEMSEA's model ICM training course. Lectures were delivered by ICM practitioners and specialists from the Environment Board of Bali Province, Warmadewa University, Udayana University, Ministry of Environment, and Bogor Agricultural University.