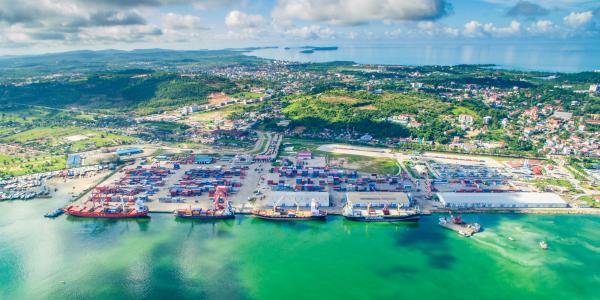 Compared to road or air transport, the most carbon-efficient and cost-effective method of transporting goods around the world is through international shipping. Accounting for the transport of more than 90 percent of all goods globally, shipping facilitates commerce and trade, contributes to sustainable economic growth, and creates prosperity among nations. Five out of the top six shipping economies in the world are located in East Asia, along with nine of the top 10 busiest container ports (by volume). In some East Asian countries, the ocean economy can account for 15-20 percent of total gross domestic product (GDP), or around $1.4 trillion in ocean-based and related industries in the region.

The concept of “Blue Economy” has thus emerged as an important approach to driving sustainable development of coasts and oceans. Blue Economy refers to the sustainable, resilient and inclusive economic activities with a direct relationship with the ocean and marine resources. This Blue Economy approach aims to generate jobs and livelihoods; an estimated 54 million people are employed in ocean industries in 10 countries in the East Asian Seas region.

Ports, marine transport and shipping are parts of the maritime industries that fall under the Blue Economy. To ensure that this vital sector remains safe, environmentally sound, energy efficient and secure, the International Maritime Organization (IMO) provides and maintains a regulatory framework to cover all aspects of international shipping including ship design, construction, equipment, manning, operation and disposal. In addition, the IMO, a specialized agency of the United Nations, works to improve the safety and security of shipping and the prevention of marine and atmospheric pollution by international shipping.

The treaty that founded the IMO was adopted in 1948 and entered into force in 1958. All coastal PEMSEA country partners are members.

The International Convention for the Prevention of Pollution from Ships (MARPOL) is the main international convention aimed at preventing ship-based pollution caused by operational or accidental causes. The MARPOL treaties include signatories from 99% of those involved in global shipping.

MARPOL is divided into different annexes—all signed and ratified independently—and numbered by their chronological addition. The first annex focused on the disposal of oil, and accidental spilling of oil. The latest focuses on air pollution that may be caused by ships. All the annexes are in force at the moment.

One of the first global conventions to protect the marine environment from human activities is the 1972 “Convention on the Prevention of Marine Pollution by Dumping of Wastes and Other Matter” (London Convention), aimed at addressing the dumping of wastes into the sea. It identifies different categories of waste and regulates how waste materials can be disposed of. PEMSEA country partners China, Japan, the Philippines and RO Korea are signatories. The 1996 “London Protocol” was agreed to further modernize the Convention and, eventually, replace it. Although both the 1972 and 1996 treaties are in force separately, not all signatories to the first have signed the second.

The “International Convention on the Control of Harmful Anti-fouling Systems on Ships” (Antifouling) and “International Convention for the Control and Management of Ships' Ballast Water and Sediments” (Ballast Water) conventions are more recent 21st century conventions targeted at very specific problems. Antifouling regulates the materials used in antifouling measures, such as paint chemicals, that harm the environment. Meanwhile, Ballast Water sets the standard for the treatment of ballast water, which is responsible for shifting marine organisms around the world that can devastate local environments.

This table includes a selection of IMO treaties relating to environmental standards for ship design and operation to which at least one PEMSEA state partner has become a party. (Lao PDR, a landlocked country, is not a party to IMO or these treaties, although it does participate in other IMO treaties.) These are treaties that provide guidance for normal ship operations. Not included are treaties dealing with adverse incidents, such as those involving liability compensation for polluting incidents or involving action required from states in response to such incidents.

While the treaties are complicated and may be difficult to monitor and implement, each country that has successfully applied its standards are on track towards the IMO-MARPOL goals. It is important to note that for some PEMSEA country partners, the lack of a signature to some of the treaties may only be a matter of time. It could also be an indication of those countries’ continuing efforts to develop their capacities to meet the requirements of the MARPOL treaties.