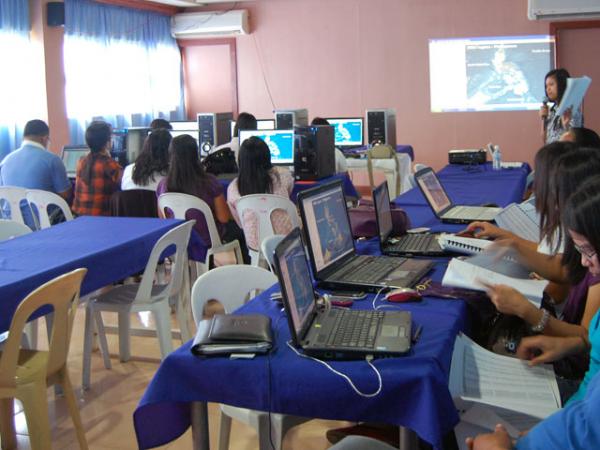 Guimaras Province, Philippines — Twenty-two representatives from the five coastal municipalities: Buenavista, Jordan, Nueva Valencia, San Lorenzo and Sibunag, provincial and national government agencies attended a three-day training on the establishment of integrated information management system (IIMS Module 1) held at the Guimaras Museum on November 8-11, 2011. The three-day training was jointly organized by the Partnerships in Environmental Management for the Seas of East Asia (PEMSEA) and the Provincial Government of Guimaras.

Guimaras Governor Felipe Hilan Nava turned over five computer units to support the operationalization of the IIMS in the five coastal municipalities. "Good data is important to support policy- and decision-making processes in the Province," said the Governor. "The establishment of an integrated database is an important step for the Province, as we undertake various projects and programs to realize our potential as an agri-tourism capital of Region 6 (Western Visayas Region in the Philippines)," he added.

The three-day training consisted of lectures and hands-on exercises on the use of the IIMS. The IIMS is a database software developed to facilitate storage, retrieval and packaging of data and information to support policy- and decision-making in ocean and coastal, and river basin management. The participants recognized the need for a "centralized" or integrated database for Guimaras and expressed their intent to establish the system. They developed their action plans and agreed to populate the data tables in the IIMS, in time for the tentatively scheduled IIMS Module 2 training on 13-15 March 2012. The trainings for the IIMS consist of 3 Modules namely: Module 1 – establishment of IIMS; Module 2 – query system and linkage with external software following data gathering and encoding into the system; and Module 3 – information networking.

The Province became one of PEMSEA's ICM parallel sites in the Philippines in July 2008, and has since been progressing well in its ICM implementation facilitated by a committed leadership and supportive stakeholders.