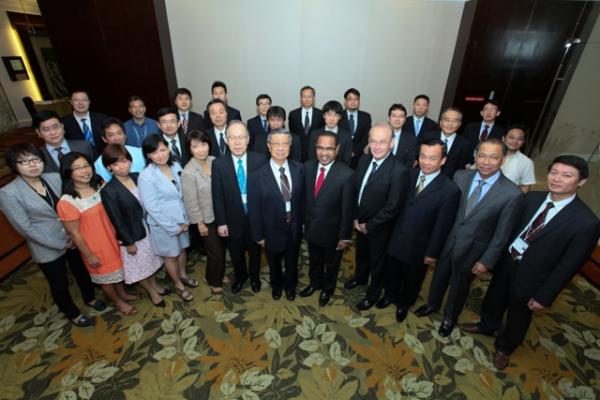 Quezon City, Philippines — PEMSEA Country Partners reaffirmed their commitment to support PEMSEA and allocate necessary assistance to facilitate the transformation of PEMSEA to an independent self-sustaining and country-owned regional organization, during the 12th expanded Executive Committee Meeting held from 3 to 4 April 2013 in Manila.

As PEMSEA gears up for its transformation and entry into a new phase of program activities, the PEMSEA Country Partners recognized that PEMSEA's continued service to the region will depend not only in financial support but most importantly in the region's strong sense of value and ownership of PEMSEA.

With barely a year left before the start of PEMSEA's fourth phase, the meeting reviewed the status of preparations to ensure that all necessary mechanisms are in place. In line with the implementation of the PEMSEA Resource Facility (PRF) Re-Engineering Plan, the meeting agreed to: proceed with the set-up of the PRF Core Group, particularly the Executive Director and Policy and Planning Head posts, which will be fully supported by countries by voluntary support; pursue the application for recognition of PEMSEA as a UNDP Implementing Partner; facilitate the ratification of the Headquarters Agreement with the Government of the Philippines; and establish an Audit Committee to oversee PEMSEA's accounting, administration and management systems.

In support of the 5-year SDS-SEA Implementation Plan, the meeting discussed and identified further actions needed to ensure country endorsements for the GEF/UNDP Project on Scaling up SDS-SEA Implementation 2014-2019, and pursue the development of new projects with various donors and supporting organizations.

As PEMSEA celebrates its 20th anniversary, the meeting noted the remarkable growth of PEMSEA and commended the strong partnerships that have been established over the years. In particular, the meeting heralded recent achievements of PEMSEA, including: (1) the highly satisfactory rating that was accorded to PEMSEA by the Terminal Evaluation on the GEF/UNDP Project on Implementation of the SDS-SEA; (2) the conformance of PEMSEA's financial and administrative management system to international fiduciary standards, as determined in an audit undertaken by the international accounting firm KPMG; and (3) the new project initiatives being developed with the the Yeosu Fund, the International Maritime Organization, ASEAN Center for Biodiversity, the World Bank and UNDP.

The meeting gave special appreciation to the incumbent Chairs of the Council (Dr. Chua Thia-Eng, Dr. Li Haiqing, and Mr. Hiroshi Terashima) as their term will be completed in July 2013, and the incumbent Co-Chairs will take their place and a new set of Co-Chairs will be elected at the 5th EAS Partnership Council Meeting in July.

The two-day meeting closed with a meaningful celebration, a kick-off event of PEMSEA's 20th anniversary at the PEMSEA Resource Facility.