On June 8, celebrated as both International Ocean Day and China National Ocean Day, Dr. Chua Thia-Eng, PEMSEA Chair Emeritus, was formerly named as one of the ten ” Ocean Figures of China 2015” at a ceremony in Beihai City, PR China. Another international personality awarded was Dr. Awni Behnam, Hon. President of the International Ocean Institute (IOI). Eight other awardees were distinguished ocean personalities from China.  The award acknowledges their outstanding achievements that stimulate people’s inner resonance and strong social influence both in China and worldwide. In the seven years that China has bestowed this prestigious award, Dr. Chua and Dr. Behnam are the first batch of international experts to receive it.

This award was hosted by the Organizing Committee of the World and China Ocean Day and sponsored by State Oceanic Administration (SOA) of China. Over the last seven years since 2009, sixty-two persons, institutions or organizations were selected for such prestigious award. The nomination process including nomination by SOA, evaluation by expert team and voting through website. 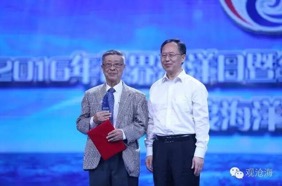 In a subsequent interview by China Ocean Press and communication with PEMSEA, Dr. Chua said he was glad to have dedicated 30 years of his career life to promote integrated coastal management as a working methodology for achieving the goals of sustainable coastal and ocean development. He said that China had made significant progress in ICM approach and hoped that China could play a leading role in promoting and scaling up ICM practices in the future.

In his professional career, Dr. Chua served in various capacities with the United Nations and international organizations. He  served as Senior Aquaculturist for the Food and Agriculture Organization of the United Nations (FAO), Regional Training Coordinator for the Network of Aquaculture Centres in Asia-Pacific (NACA), Director of Coastal Management Programme and National Research for the International Centre for Living Aquatic Resources Management  (ICLARM) and Regional Programme Director of the GEF/UNDP/IMO PEMSEA Project, as well as Research Council Member and Advisor to the Ocean Policy Research Foundation of Japan. He was a key person transforming PEMSEA from a project into an international organization and served as its Executive Director until he retired in 2008 when he was elected to serve as Chair of the PEMSEA Partnership Council until 2012.

Being a prolific writer, Dr. Chua also served as associate editor, executive editor and editor of the Journal of Coast and Ocean Management, Tropical Coasts and Ocean Policy Studies (Japan) respectively. He was the founding President of the Malaysian Science Society and the Asian Fisheries Society, and member of the academic staff of the National University of Singapore, Universiti Sains Malaysia and University of the Philippines in the Visayas and Xiamen University in China.

Dr. Chua has received numerous international awards and acknowledgements, including the First Gold Medal Award (1995) and Honorary Membership Award (1998) of the Asian Fisheries Society; Honorary Life Membership Award (1994) of the Malaysian Fishery Society; the prestigious “Friendship Award” by State Council of PR China (1997); the Sahak Metrey Medal by His Majesty King Sihanouk of the Royal Government of Cambodia (2002); Outstanding Alumni of the National University of Singapore (2006); and Honorary Citizen of Xiamen, PR China (2011). In 2013, the library of PEMSEA was named as “Dr. Chua Thia Eng Library” in recognition of his contribution to PEMSEA. He received a Doctorate of Philosophy (1971) from the University of Singapore and bachelor degree from Nanyang University, Singapore (1964).

Dr. Chua currently holds the position of Chair Emeritus of the East Asian Seas Partnership Council, the governing body of PEMSEA. Most recently he has been dedicating himself to harnessing ICM good practices and distilling lessons from case studies to further strengthen ICM as an efficient and effective approach for redefining regional coastal governance in the East Asia region.