#Buhayilog: How to Revive Asia’s Rivers 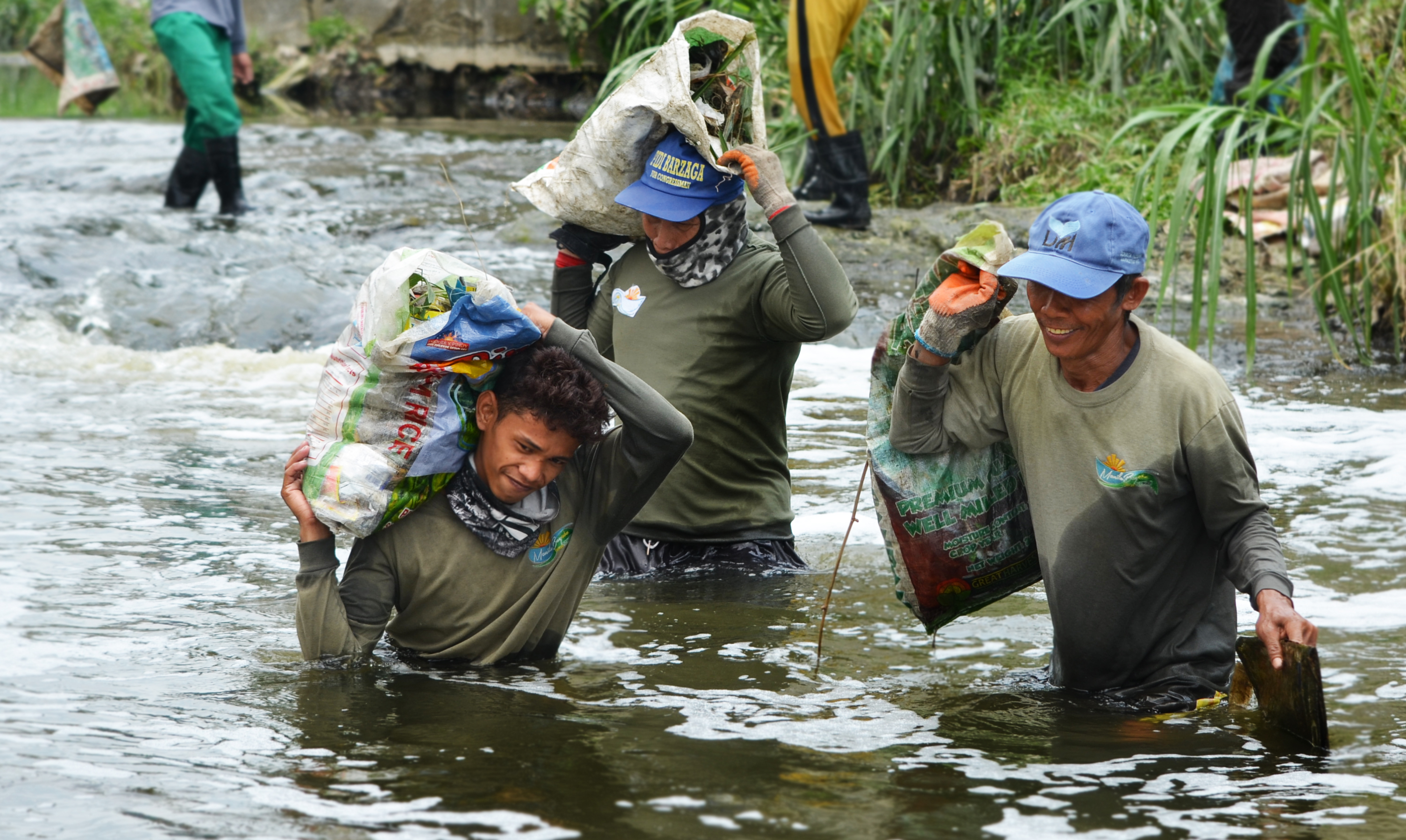 River Rangers from Imus haul sacks of newly-collected garbage in chest-deep waters. “Tomorrow, new trash will flow down from the uplands to again cover this riverbank with garbage,” shares ranger Junjun Brinola. Though the work is ceaseless, regular river cleanups can help prevent garbage from flowing out to sea.  (Gregg Yan / PEMSEA)

“We work all day to clean this river. Do you know that tomorrow, new trash will flow down from the uplands to again cover this riverbank with garbage?” says Junjun Brinola, a River Ranger from Imus in Cavite. “Our job never ends, but it’s okay with us. At least we’ll always have work.”

Like his fellow rangers, Junjun spent years as a basurero or wastepicker before finally landing a job as a government ranger. Now his 14-man team scours the Imus River and other waterways for garbage. But where does all the trash come from?

Project ASEANO, an international initiative to combat river waste, commissioned several studies to trace the sources of plastic pollution in the Imus River in Cavite, a rapidly-growing province south of Manila in the Philippines. Among the contributors of plastic waste are Food Service Enterprises (FSEs) like restaurants, plus households, which generate enormous amounts of garbage, especially from disposable sando-bags and sachets.

“Sachets have always been vilified, but they are socio-economic equalizers, allowing less-privileged people to taste and experience what wealthier people regularly consume,” explains Marvi Aguilar, a researcher from DLSU Dasmariñas. A 1.8-gram coffee sachet for instance, costs as little as PHP6, compared to PHP600 for a 300-gram jar of the same coffee. The cost difference makes it an obvious choice for minimum wage earners.

Sachets are most commonly sold in sari-sari stores, ubiquitous Filipino neighborhood stores which sell repacked goods ranging from rice to cigarettes. “Sari-sari stores sell what regular people can easily afford from a day’s wage,” shares Amy Demetillo, a sari-sari store owner from Dasmariñas. “Families can easily budget the available finances of their households because they buy only what they need, even if it’s just enough to cook a single meal.”

Though they generate significant amounts of waste, sari-sari stores help improve the lives of regular people, even becoming a lifeline for those who make next to nothing.

“Sachet culture is ingrained not just in the Philippines, but in many impoverished communities around the world, particularly in developing countries. We can’t just ban them, so a better solution might be to shift to biodegradable sachet packaging,” recommends Dr. Edwin Lineses of DLSU-Dasmariñas.

For used sachets, upcycling can be a solution. “Here in Imus, we have a facility which turns used sachets into handy items like grocery bags, which are durable and waterproof,” says Imus CENRO eco-aid Nerea Defensor.

Another waste contributor is the Food Service Industry (FSI), whose kiosks and restaurants generate enormous amounts of garbage, especially during the COVID-19 pandemic, where take-out deliveries became the norm.

Many establishments are doing their part to minimize in-store waste. “We only give straws to our drive-through customers,” shares Lodde Navarro, who works for an international fast-food chain. “Dine-in customers are given metal utensils, plus durable plastic plates and cups. We also ask those who order take-out meals if they really need disposable utensils. These small steps help reduce our contribution of plastic waste.”

How Plastic Waste Flows to Sea

The journey of plastic waste from factories to groceries, from households to dumpsites, and from rivers to coastlines, is complicated. Partnerships in Environmental Management of the Seas of East Asia (PEMSEA), which is implementing Project ASEANO in the Philippines and Indonesia, is tackling plastic pollution through an integrated plastic waste management approach which combines the use of science to adjust policies, adopt suitable technologies and build local capacity to monitor and manage waste.

The Philippine component of the project centers on the Imus River Watershed, one of six river systems in Cavite. The Imus River itself begins in the uplands of Tagaytay and Silang and passes through some of Cavite’s most densely-populated hubs, including Dasmariñas, Imus, Kawit and Bacoor, before discharging its contents into Manila Bay.

Once productive, the river is dying a slow death from pollution and sedimentation. “When we were young, we’d catch so many fish in this river,” recalls Noriel Gonzaga, a local official from the coastal municipality of Kawit. “It’s sad that today’s kids can no longer dive and swim in a clean and clear river, the way we used to. The riverbanks are no longer made of sand, but mud. Most fish are gone, with plastic and rubber tires everywhere. I’m calling out to my fellow Caviteños. Please look at what’s become of our beloved river. I hope we can bring it back to life.”

To communicate river and waste management solutions in an educational but engaging manner, Project ASEANO launched #BuhayiLog (Filipino for Life Beside a River), an interactive map of the Imus River which shows the various natural elements, challenges and solutions needed by both the public and governments to better understand how to manage Asia's rivers.

“There are so many practical solutions to address the global challenge of plastic waste,” says PEMSEA executive director Aimee Gonzales. “Solutions can range from empowering often-ignored players like basureros and junkshops, to educating the next generation to be mindful of the waste they generate. Project ASEANO is a repository for integrated plastic waste solutions, particularly for riverside communities.”

Project ASEANO has been working closely with public and private sector allies to unlock the keys to reviving Asia’s rivers.

“Project ASEANO can be a guide for other parts of the country to improve existing policies and ordinances on how to combat growing plastic pollution in our rivers,” notes Cavite PGENRO Anabelle Cayabyab. “The project’s studies can help various sectors enhance their sense of social responsibility and be partners in addressing plastic pollution in other major rivers and tributaries.”