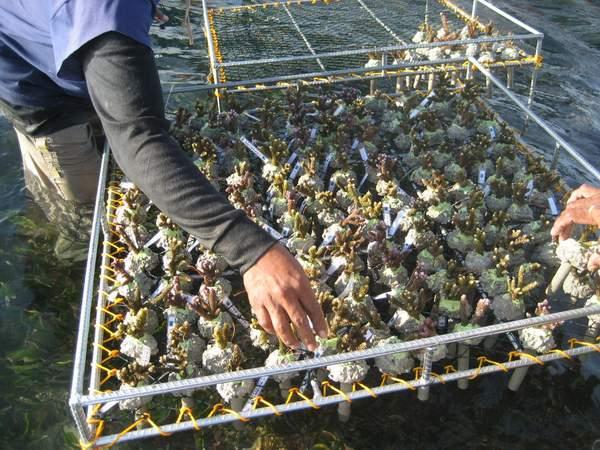 Coral being transplanted off Serangan Island (I Ketut Sudiarta)

The recently published Local Contributions to Global Sustainable Development Agenda: Case Studies in Integrated Coastal Management in the East Asian Seas Region contains case studies from throughout these 25 years, showing how ICM can benefit coastal and marine areas. Below are summaries of two case studies where the implementation of ICM enhanced biodiversity conservation and led to an increase in ecosystem health.

In the late 1990s, an attempt to stimulate tourism development in Serangan Island, just off Bali, led to a large land reclamation project. Despite the resulting land of the island being five times larger, new land-based development activity failed to appear, and there was no new investment on the island.

Nonetheless, the land reclamation had a significant impact, destroying coastal and marine habitats where land was reclaimed, while damaging surrounding marine ecosystems. Immediate damages included the loss of 50% of the island’s mangroves, and 75% of the island’s seagrass. By 2002, sediment damage meant that 37.9% of surrounding corals had died.

Environmental damages had dramatic knock-on effects on the island’s community. The failure of the project to bring in new industry was compounded by environmental damage that destroyed fishing sites and depleted marine resources. For a community highly dependent on coastal fishing, this was devastating. Some turned to destructive fishing techniques to try and deal with the loss of fishing grounds, others took up other damaging activities such as harvesting coral for sale to aquariums and as ornaments. These activities led to further environmental degradation, and life became even worse for the community as they were banned from nearby fishing areas as a result.

Change began with the local community, who pledged to restore their reefs and raise awareness and understanding of the importance to the environment. In 2004 the Government of Bali, together with PEMSEA, established Serangan Island as a location for an ICM pilot project. This project focused on increasing awareness of the importance of the environment, and create and support opportunities for alternative livelihoods.

From having a reputation for destructive fishing activities, the island’s community began coral restoration projects and engaged in eco-tourism. Locally-driven behavioral change, aided by support for education and outreach, was key to changing the fortunes of the community. A holistic and integrated approach meant the expansion of economic opportunities under ICM was sustainable, and the ecosystem around the islands is now actively restored, protected, and valued.

The Yellow River is of central importance both to the land of northern China and to the Bohai Sea where it terminates. Stretching 5,460km through 9 provinces, the river transports an unusually dense level of sediments towards the Bohai Sea. In addition to providing fresh water to the over 100 million living within its river basin, the river also supports ecosystems within it and in the Bohai Sea, including important fish spawning grounds.

Following an increase in irrigation and dam-building beginning in the 1960s, an issue compounded by decreasing regional precipitation, both the volume of discharged water and the sediment load this water carried began to decrease. From 2000-2010 water discharge averaged 30.3% below the 1950-1968 average. Sediment load during the same period dropped to 10.7% of the baseline.

Declining water and sediments had grave effects on fish in the Yellow River delta and in the Bohai Sea. Salinity increased by 2 parts per thousand across the sea and up to 15 parts per thousand in some areas near the delta. Decreasing sediment caused the coastline to change affecting water circulation. By 2008, fish egg density was 30% lower than in 1982, and some species of fish became locally extinct.

With the detrimental impacts of the reduced river flow clear, operations began to manipulate the reservoir waters to simulate the natural seasonal runoff that occurred due to monsoons. For 20 days each June, deliberate discharge is greatly increased, reaching up to 4× the discharge during this period in previous years. This decreased the salinity of a large area of the Bohai Sea to a level conducive to fish spawning, while decreasing flood risk in areas of the river where lower flow had led to the river becoming shallower.

This facilitated seasonal discharge is now incorporated into the ICM program for the area. Increased fish egg density in the estuary shows that spawning rates are recovering. The river’s own ecosystems are recovering, with populations of fish within the river increasing. By considering the needs of the coastal and marine ecosystems within an integrated system, potential negative effects of development on biodiversity can be greatly reduced.