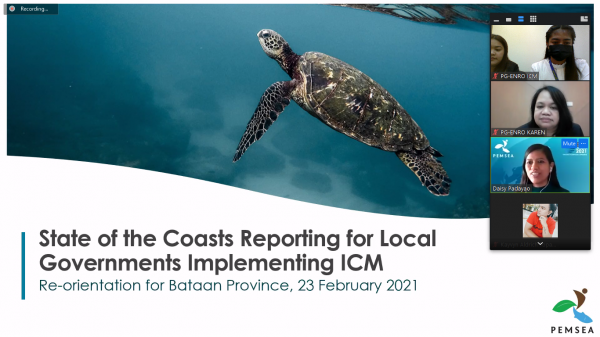 Part of the province’s activities for the preparation of its 2nd SOC report, the re-orientation was held to: level off the understanding of the reporting system, including the data requirements and process for its development and particularly intended for representatives from relevant municipal, provincial and national government agencies who were newly assigned as focal persons for the Integrated Coastal Management (ICM) program implementation in the province; as well as identify the focal persons and agree on the next steps for the preparation of the 2nd SOC report of Bataan Province. The province of Bataan published its 1st SOC report in 2017 covering the period 2000-2015.

Developed by the Partnerships in Environmental Management for the Seas of East Asia (PEMSEA), the SOC is a reporting system for local governments implementing ICM to assess the progress, benefits and impacts of their ICM program implementation. The SOC also documents and measures policy and management interventions in addressing environmental issues. As part of its Advisory and Project Services, PEMSEA provides technical assistance to local governments in the preparation of their SOC reports.

Ms. Karen June Balbuena, PG-ENRO Technical Staff, provided an overview of Bataan’s 1st SOC report, which covered 35 core indicators of the governance elements and sustainable development aspects based on the Framework for Sustainable Development of Coastal Areas. She highlighted the key achievements of the province in its ICM program implementation from 2000-2015 as documented in the SOC report, the process that were undertaken in developing the report, as well as the indicators that require further attention in the province’s ICM program implementation.

Some of the gaps identified in the 1st SOC report of Bataan Province included the need for continuous strengthening of local capacity; the identification of other sources and mechanism for sustainable financing of the ICM program; the need to develop a comprehensive management plan for habitat protection and conservation, water resource conservation, and fisheries management; the limited alternative livelihood programs; the need to establish an environmental monitoring program; and the need to further strengthen the province’s efforts for pollution reduction and waste management.

Preparing for the 2nd SOC Report

Three years since the publication of the province’s 1st SOC report, Bataan is embarking on the preparation of its 2nd SOC report to cover the period 2016-2020. Starting off with the re-orientation and the identification of focal persons in the municipalities and relevant provincial departments and national agencies, Bataan PG-ENRO is aiming to complete the data gathering, consolidation and validation by June 2021, and proceed with the drafting, validation and finalization of the SOC report and publish it in 2022. Ms. Daisy Padayao, PEMSEA Country Programme Manager, highlighted some key questions to be considered in the  preparation of  Bataan’s 2nd SOC Report, including: (a) what are the changes in the governance elements and implementation of management programs since 2015?; (b) were the gaps and recommendations identified in the 1st SOC report considered and implemented?;  and (c) are there new developments in the province since 2015 relevant to the sustainable development of the costal and marine areas that should be highlighted in the 2nd SOC report?

Ms. Padayao lauded Bataan’s efforts in initiating the updating of its SOC report and sustaining its application as the monitoring, evaluation and reporting mechanism of its ICM program. Among the benefits of the SOC reporting system includes the consolidation of the various environmental efforts in the province; provides a platform for multisectoral participation, interaction and awareness building in coastal and marine governance; documents the changing social, economic and environmental conditions and the progress, including gaps and challenges, towards the province’s sustainable development targets.

Ms. Padayao also commended the Province of Bataan for being awarded the ICM Level 2 certification, which was announced during the Annual PNLG (PEMSEA Network of Local Governments) Forum held in November 2020. Such certification is a recognition of the province’s achievements in continually improving its ICM program implementation for the sustainable development and management of its coastal and marine areas. This achievement, along with new developments in the Province, should be highlighted in the 2nd SOC report of Bataan.

For more information on the SOC Reporting system, visit: http://pemsea.org/our-services/advisory-and-project-services/state-of-the-coasts-reporting-system.