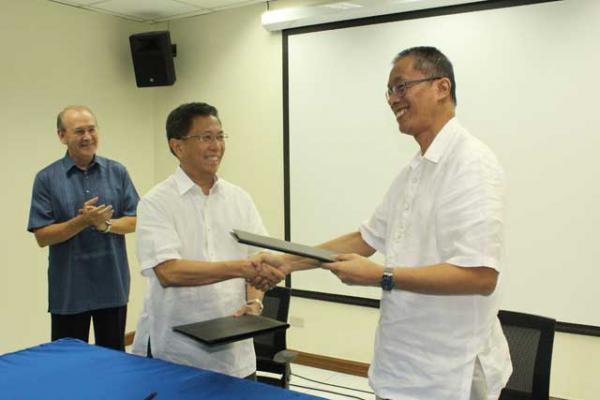 Laguna, Philippines — Two international organizations have renewed their alliance to help conserve Southeast Asia's dwindling marine biodiversity. The ASEAN Centre for Biodiversity (ACB) and the Partnerships in Environmental Management for the Seas of East Asia (PEMSEA) have signed a letter of commitment (LOC) renewing their cooperation to promote the conservation and sustainable use of coastal marine biodiversity. The LOC was signed by Rodrigo Fuentes, Executive Director of ACB, and Raphael Lotilla III, Executive Director of PEMSEA.

The renewed alliance will continue the two institutions' partnership in the areas of information exchange, capacity development, policy advocacy, and public awareness. The first LOC was signed on August 27, 2009.

The first joint activity for 2012 will be ACB's participation in the East Asian Seas Congress being organized by PEMSEA. The congress will be held from July 9 to 13 this year in Changwon City, Republic of Korea. ACB and PEMSEA will co-convene a workshop on achieving the Aichi Biodiversity Targets, the new global targets in reducing the rate of biodiversity loss. The Strategic Plan of the Convention on Biological Diversity, known as Aichi Targets, addresses the underlying causes of biodiversity loss through global action to reduce the pressures on biodiversity, safeguard biodiversity at all levels, enhance the benefits provided by biodiversity, and provide for capacity-building.

ACB is an intergovernmental organization that coordinates regional efforts on biodiversity conservation and sustainable management in Southeast Asia while PEMSEA is a partnership arrangement involving various stakeholders of the seas of East Asia, including national and local governments, civil society, the private sector, research and education institutions, communities, international agencies, regional programs, financial institutions and donors.