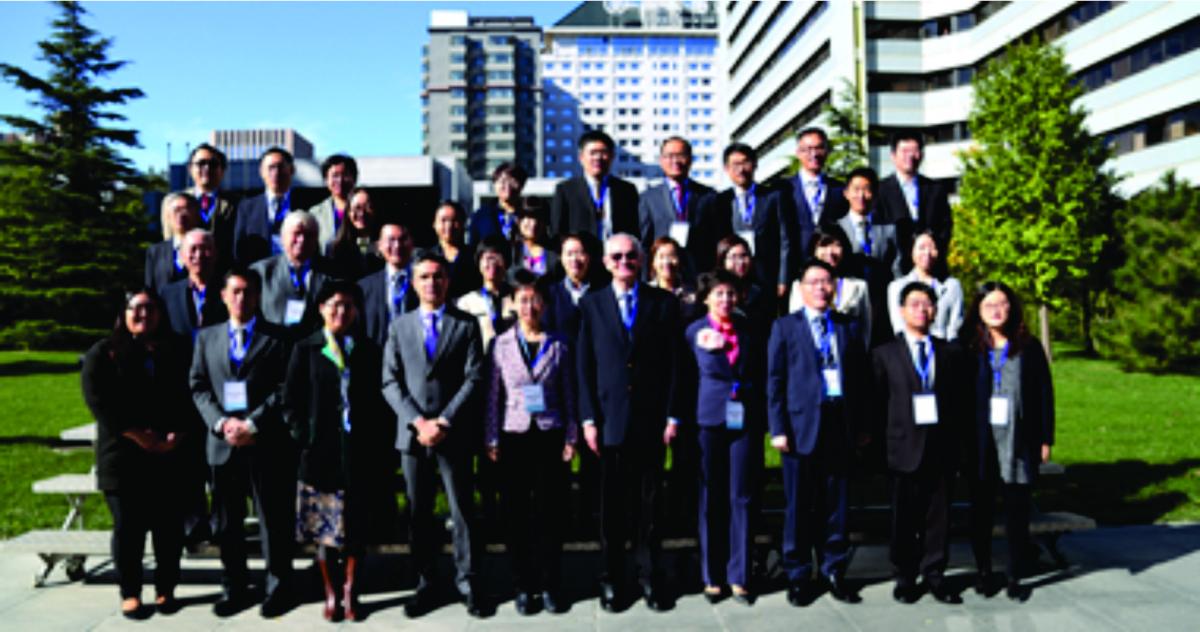 NOWPAP representatives were part of the 812 stakeholders that attended the 2015 East Asian Seas Congress, hosted by MONRE and PC of Da Nang City, and organized by PEMSEA in Da Nang, Vietnam, on 16-20 November 2015. NOWPAP participated in the Congress as a non-country partner of PEMSEA.  In addition to attending an East Asian Seas Partnership Council meeting, a Ministerial Forum of PEMSEA member states, and several special events and workshops during the Congress, NOWPAP set up an exhibition booth to showcase its activities with posters, publications and promotional items.

With approval by the Ministerial Forum of the new (revised) Sustainable Development Strategy for the Seas of East Asia (SDS SEA) with strategic targets for 2016-2021, NOWPAP is expected to further enhance the relationship with PEMSEA through cooperative activities such as having joint training course on Integrated Coastal Management, linking PEMSEA “knowledge bank” with NOWPAP databases, etc.

NOWPAP actively participated in the 2015 PICES annual meeting held on 14-25 October 2015 in Qingdao, China, where NOWPAP co-sponsored/convened the following events:

• Workshop on Contrasting Conditions for Success of Fish-killing Flagellates in the Western and Eastern Pacific — A comparative ecosystem approach.

• Workshop on Identifying Major Threats to Marine Biodiversity and Ecosystems in the North Pacific.

NOWPAP Regional Activity Centres (CEARAC, MERRAC and POMRAC) were involved in the preparation of the events mentioned above and NOWPAP as a whole has funded nine participants as co-conveners or invited speakers.

During the annual meeting, NOWPAP Deputy Coordinator delivered a presentation at the MEQ meeting and Technical Committee on Data Exchange (TCODE) meeting respectively where cooperative activities between NOWPAP and PICES were introduced and continuation of cooperation was discussed. In this regard, PICES decided to participate in the 20th NOWPAP Intergovernmental Meeting on 28-30 October 2015 in Beijing.

A NOWPAP representative participated in the 10th Intergovernmental Session of UNESCO Intergovernmental Oceanographic Commission’s Sub-Commission for the Western Pacific (IOC WESTPAC) held on 12-15 May 2015 in Phuket, Thailand.  A presentation was delivered by the NOWPAP representative introducing briefly NOWPAP in general and suggesting areas for possible cooperative activities in the next two years.  Among the WESTPAC ongoing projects/activities reviewed at the meeting, NEAR-GOOS, Harmful Algal Blooms (HAB), Remote Sensing for Habitat Mapping, Marine and Coastal Biodiversity are of interest to NOWPAP.  Exchanging information by experts from each organization and participating in meetings and workshops organized by the others were encouraged.

On 8 November 2015, NOWPAP set up a booth at Toyama International Festival introducing NOWPAP activities to the visitors.  Joining other organizations based in Toyama, NOWPAP participated in the annual event which was aimed at promoting cultural exchange between the local people and foreign expatriates living in Toyama. 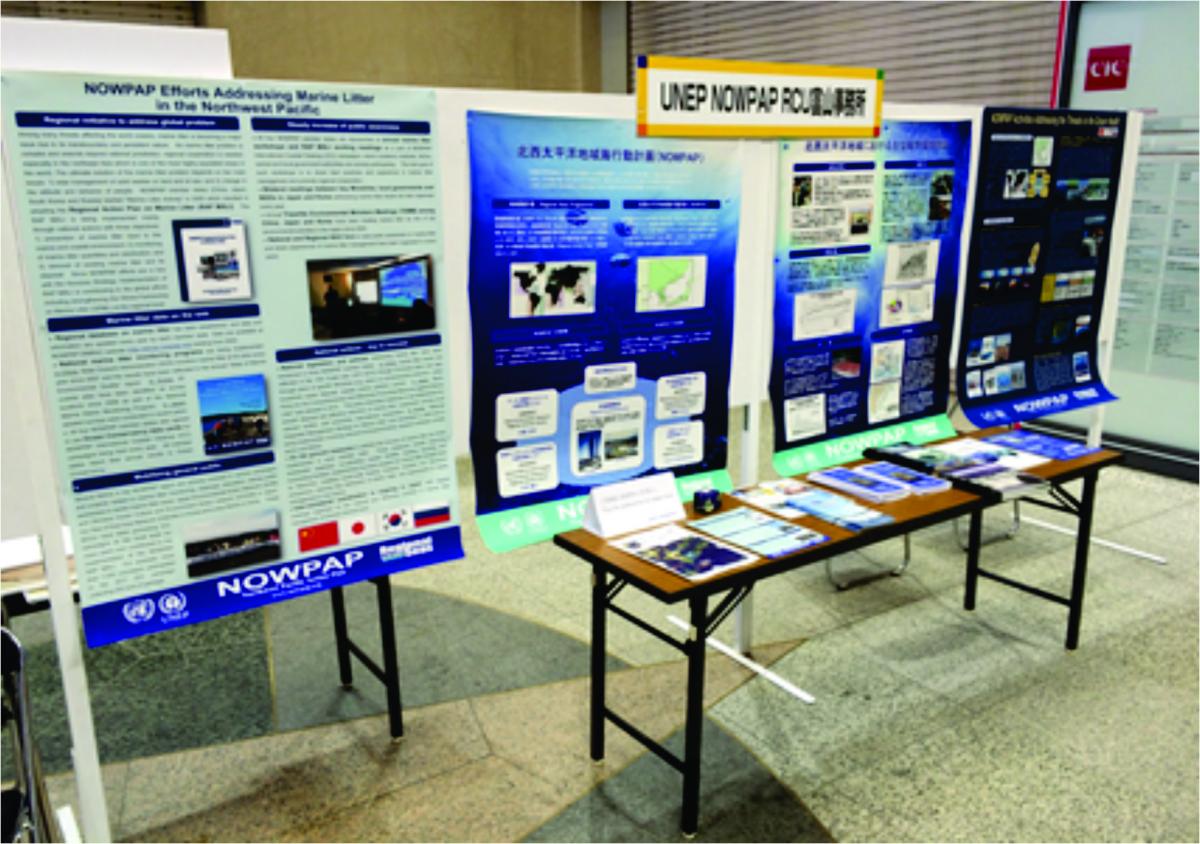 On 11 November 2015, NOWPAP RCU staff members attended the 12th meeting of the Sub-Committee on Environment of the Association of the North East Asia Regional Governments (NEAR) and delivered a presentation introducing NOWPAP and its activities.  With overlapping membership, NOWPAP has been in touch with NEAR exchanging information during the NEAR Sub-Committee meetings organized every two years in Toyama.  It was agreed at this year meeting that the following projects would be conducted in 2016 through the Northwest Pacific Region Environmental Cooperation Centre (NPEC), the host of NOWPAP CEARAC:

In addition, as a contribution from NEAR to a G7 environment ministers meeting in Toyama in May 2016, the second Northeast Asia Environmental Forum will be also held in May 2016.

The 2015 NOWPAP International Coastal Cleanup (ICC) and workshop on marine litter management were held on 24-25 September 2015 in Yantai China.  The workshop was organized as a joint event of NOWPAP and TEMM (Tripartite Environment Ministers Meeting among China, Republic of Korea and Japan).  Participants who attended the workshop were NOWPAP marine litter focal points, ICC coordinators and representatives of NOWPAP Regional Activity Centres, NOWPAP partners (Ocean Conservancy and COBSEA), research institutions and environmental NGOs. The participants joined students from a local university in the beach clean up to promote ICC, collecting and recording marine litter items in the ICC data cards which will be submitted to Ocean Conservancy to compile a global report. 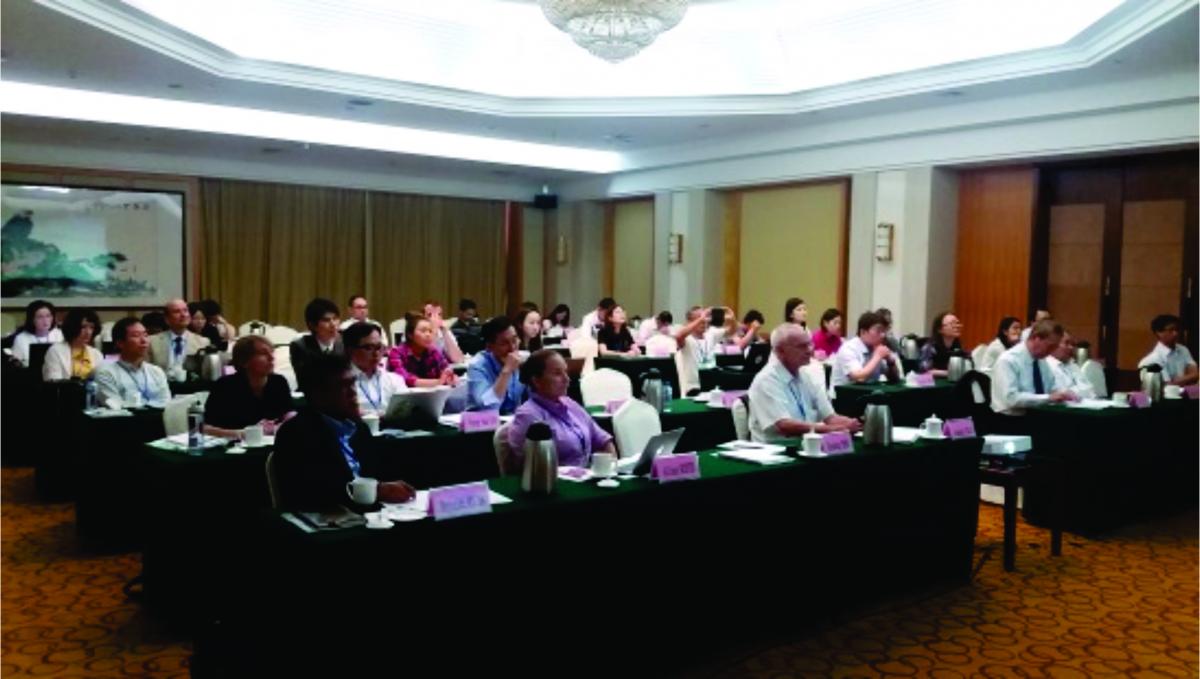 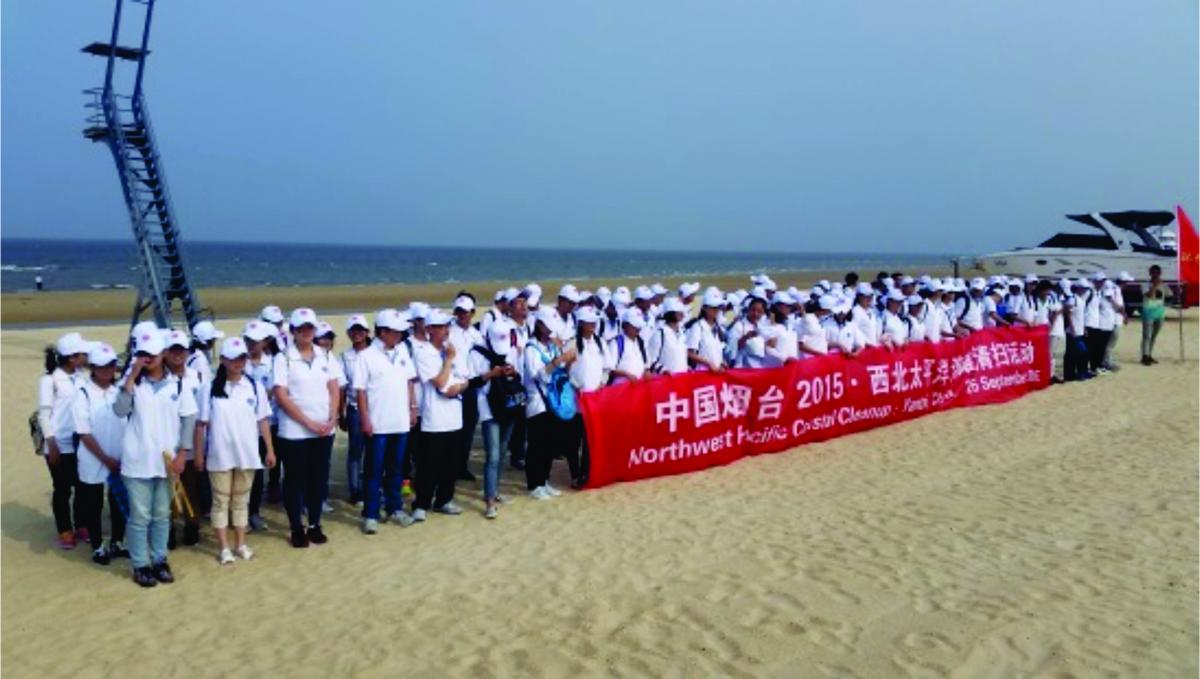 Similar ICC campaign was also organized in Korea where staff members of RCU Busan Office jointed local people on 18 September 2015 in Busan participating in a beach cleanup campaign.  Held at Songdo beach, the campaign started with a ceremony to mark the 2015 International Coastal Cleanup (ICC) in Korea, followed by awarding those who made their great efforts on addressing the issue of marine litter.  A statement on marine litter was read at the beginning with the Minister of Oceans and Fisheries of the Republic of Korea present.

Representing UNEP, the NOWPAP Coordinator made a presentation on 24 July 2015 at a roundtable discussion in the Swiss Embassy in Tokyo to mark the port call of the “Race for Water Odyssey” expedition.  The NOWPAP Coordinator introduced UNEP efforts in dealing with marine litter starting from UNEP initiative on ML in 2003 (with regional and global marine litter assessments), the 5th International Marine Debris Conference in Honolulu in 2011 (with Honolulu Strategy and Honolulu Commitment adopted), and then GPML establishment at the Rio+20 Conference in 2012 (including online Marine Litter Network).  UNEA resolution on plastic debris and subsequent study were also mentioned along with major UNEP publications already produced and expected to be available in 2015-2016.  NOWPAP Regional Action Plan on Marine Litter (RAP MALI) was briefly introduced with a few examples.  Marine litter-related publications produced by NOWPAP in recent years were distributed at the meeting.  When the “Race for Water Odyssey” made its port call in Shanghai, the ICC coordinator in China attended a similar round table discussion on 10 August. 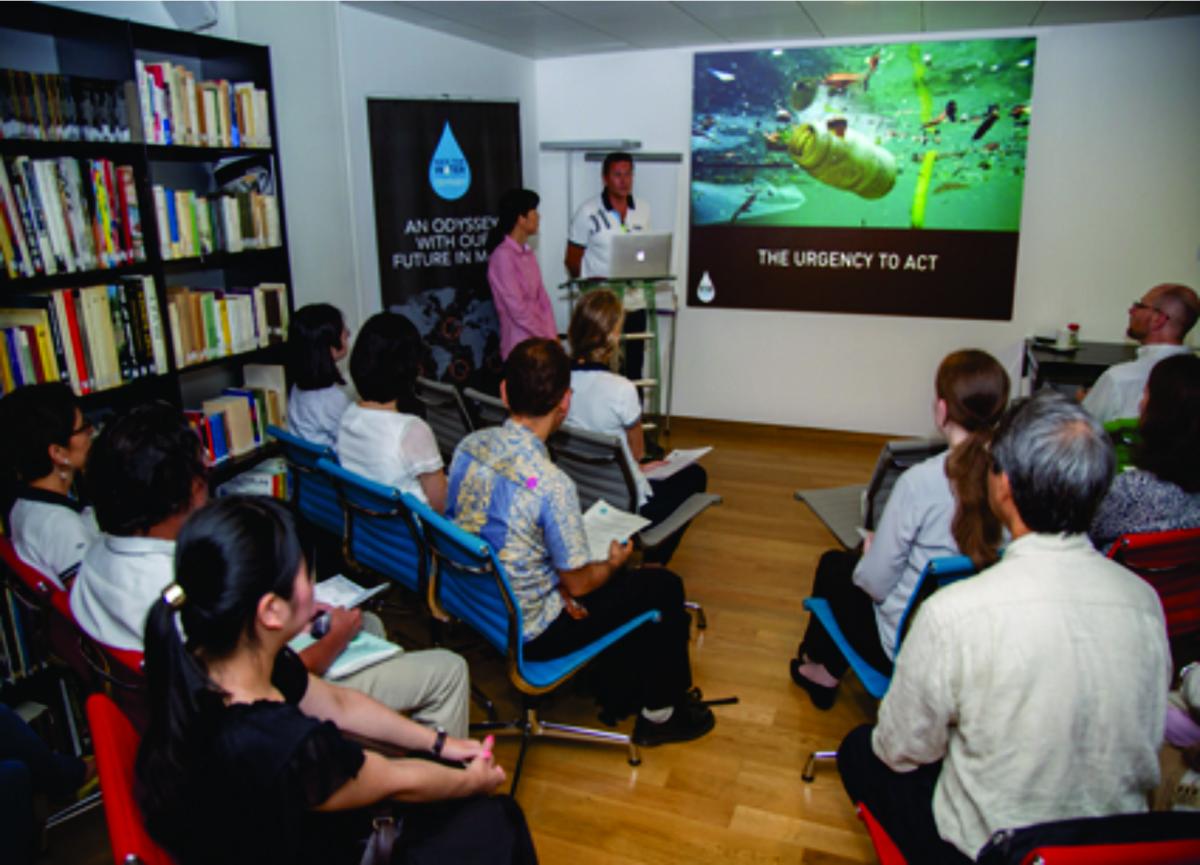 Two NOWPAP representatives joined other members of the Global Partnership on Marine Litter (GPML) around the world in an online conference held on 26 June 2015.  During the conference, recent developments of GPML were shared by the GPML secretariat, including GPML Communication Strategy and a Marine Litter Massive Open Online Course to be launched in September 2015.   To promote GPML at regional level, NOWPAP has been hosting the GPML Northwest Pacific regional node since 2014.

Upon invitation, a representative of NOWPAP delivered a lecture on marine litter at the Toyama Prefectural University on 26 June 2015. Targeting a group of university students, the one hour lecture started with stressing the global threat of marine litter and then introducing the efforts against marine litter at both global and regional levels, including cooperation among NOWPAP members through the implementation of NOWPAP Regional Action Plan on Marine Litter.  The lecture will help students understand the issue of marine litter and relevant actions undertaken both in Japan and internationally.